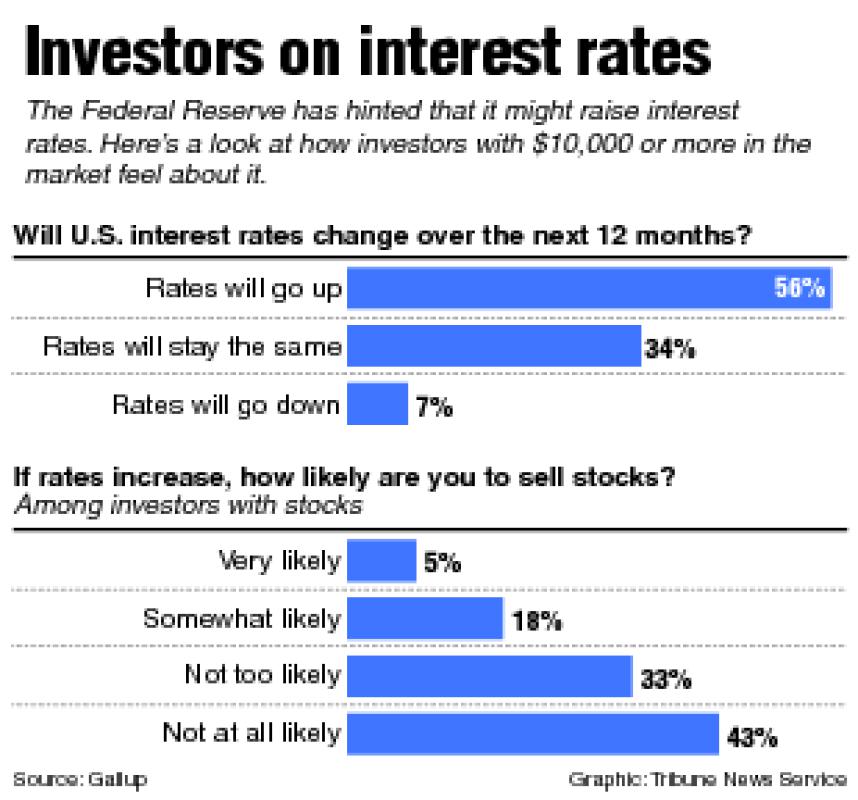 Chart of how U.S. investors feel about the possibility of an interest rate hike. Tribune News Service

Washington — Federal Reserve Chair Janet Yellen said Friday that any increase in rock-bottom interest rates to “more normal” levels would be gradual and that rates would remain low “for some time” while the economy continues to recover.

But she also said the effects of central bank policy can take a while to kick in, and she cautioned that the Fed should not wait too long before taking its first step in six years toward traditional interest rate levels.

For months, investors have been scrutinizing Federal Reserve meetings and speeches for hints about when “liftoff” — the first rate increase in more than six years — will take place. The federal funds rate is one of the central bank’s main tools for stimulating or slowing the U.S. economy and a key benchmark for other interest rates.

While some say a rate increase could arrive as early as June, most investment advisers now expect it would take place no sooner than September.

Yellen said she thinks “the appropriate time has not yet arrived” but expects that “conditions may warrant an increase in the federal funds rate target sometime this year.”

The Federal Reserve is eager to get liftoff because it has been trying to chart a course back to normal interest rates, a level its members believe should eventually be about 3.5 to 4 percent. For more than six years, the central bank has kept interest rates at or near zero percent, a level that has allowed households and corporations to reduce debt and lock in low long-term rates.

But the low interest rates mean that the Fed would not have its most important tool at its disposal if an economic crisis called for new stimulus. That might force it to turn to unorthodox methods, such as purchases of mortgages and bonds as it did at the depths of the recent recession.

“Beginning the normalization of policy will be a significant step toward the restoration of the economy’s normal dynamics, allowing monetary policy to respond to shocks without recourse to unconventional tools,” Fed vice chairman Stanley Fischer said on Monday in a speech to the Economic Club of New York.

But the Fed might feel worried about potential risks of using those unconventional tools, given its already bloated balance sheet from its last intervention in bond markets during the recession, Yellen said.

Yellen said that although there is no reason to raise rates now, the Fed must be ready to do so in the future.

“Policymakers cannot wait until they have achieved their objectives to begin adjusting policy,” Yellen said in a speech at a research conference sponsored by the Federal Reserve Bank of San Francisco.

She said postponing a rate increase for too long could encourage investors to take too many risks, given the low interest rates, “potentially undermining the stability of the financial markets.”

The Fed’s current targets are 5.0 to 5.2 percent unemployment and 2 percent inflation. Yellen said that inflation is currently depressed by the fall in oil prices and other one-time factors the Fed regards as “transitory.” As a result, she said that she might favor raising rates ahead of any indications that prices excluding the energy market started picking up significantly. Otherwise, she said, the Fed would risk “significantly overshooting” its inflation target.

However, Yellen stuck to her usual stance favoring low interest rates over the short and medium term to continue supporting the recovery. She noted that although payroll gains averaging about 275,000 a month were “well above the pace needed” to lower the unemployment rate, “we still have some way to go to reach” the Fed’s employment goal.

She said she is “cautiously optimistic” about the economy, citing employment gains, the windfall from lower energy prices, continued increases in household wealth, and a relatively high level of consumer confidence.

But Yellen warned that not all sectors of the economy are doing as well. She said that the strong dollar was hurting exports, low oil prices were prompting cutbacks in drilling activity, and the recovery in residential construction remains “subdued.” She added that “the economy in an ‘underlying’ sense remains quite weak by historical standards.”

Yellen also responded to lawmakers who have rallied around a monetary policy formula created by conservative Stanford University economist John Taylor. Following the formula would result in rates much higher than they are now.

“Under normal circumstances, simple monetary policy rules, such as the one proposed by John Taylor, could help us decide when to raise the federal funds rate,” Yellen said. But she added, “I would assert that simple rules are, well, too simple, and ignore important complexities of the current situation.”

Fed open market committee members indicated earlier this month that they expected the path back to higher rates would take longer than they expected just three months ago.

But Fischer said that “a smooth path upward in the federal funds rate will almost certainly not be realized, because, inevitably, the economy will encounter shocks — shocks like the unexpected decline in the price of oil, or geopolitical developments that may have major budgetary and confidence implications, or a burst of greater productivity growth, as the Fed dealt with in the mid-1990s.”