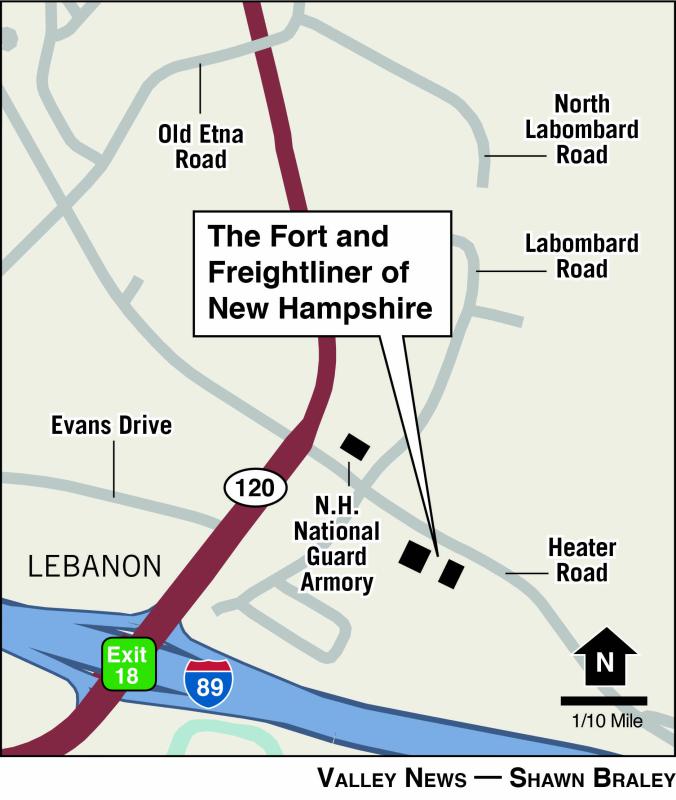 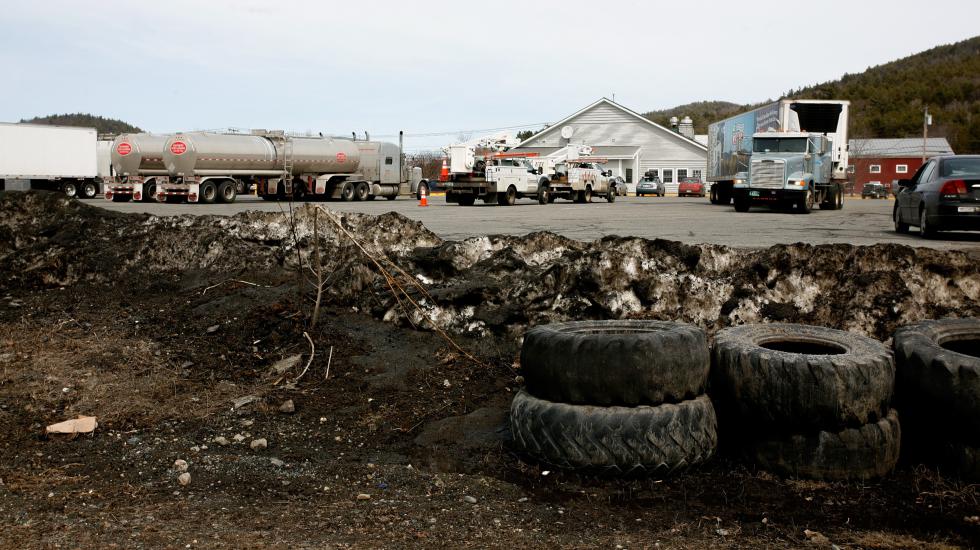 Champlain Oil is planning to build and reconfigure their Heater Road property in Lebanon, N.H. The building housing the current convenience store and restaurant (at rigth) will either be renovated or replaced, a new truck stop is to be built and the Freightliner dealership is to be moved to a new facility on the southern end of the property where a tire business is currently located. (Valley News - Geoff Hansen) <p><i>Copyright Â© Valley News. May not be reprinted or used online without permission. Send requests to permission@vnews.com.</i></p> 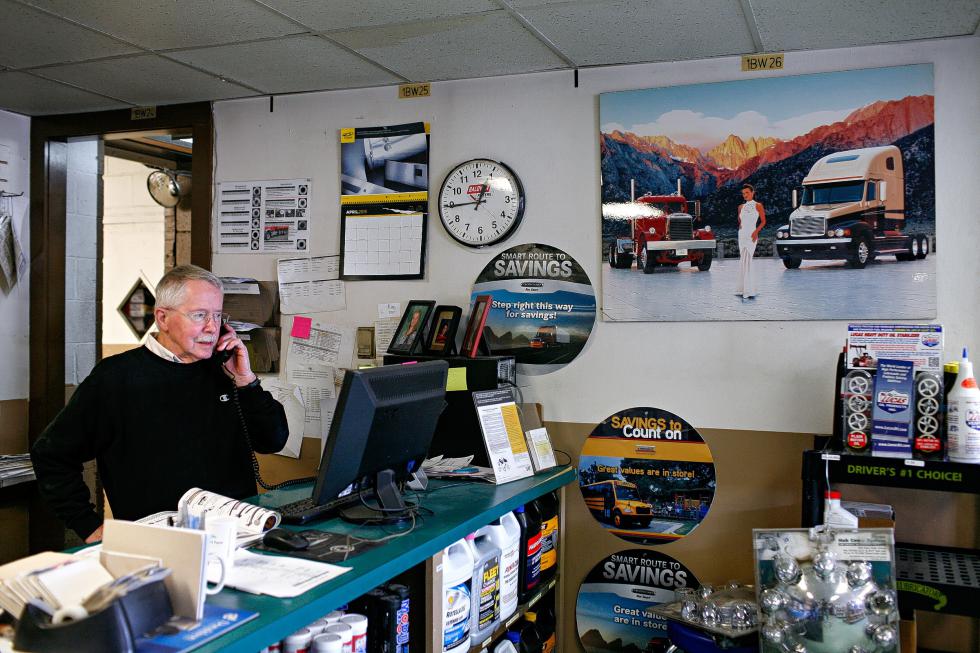 Daryl Osgood talks with a customer about parts availability at the Freightliner dealership in Lebanon, N.H., on April 3, 2015. Osgood has worked at the truck dealer's parts department for 17 years and worked at Freightliner's predecessor, Decato Brothers, for 15 years. (Valley News - Geoff Hansen) <p><i>Copyright Â© Valley News. May not be reprinted or used online without permission. Send requests to permission@vnews.com.</i></p> 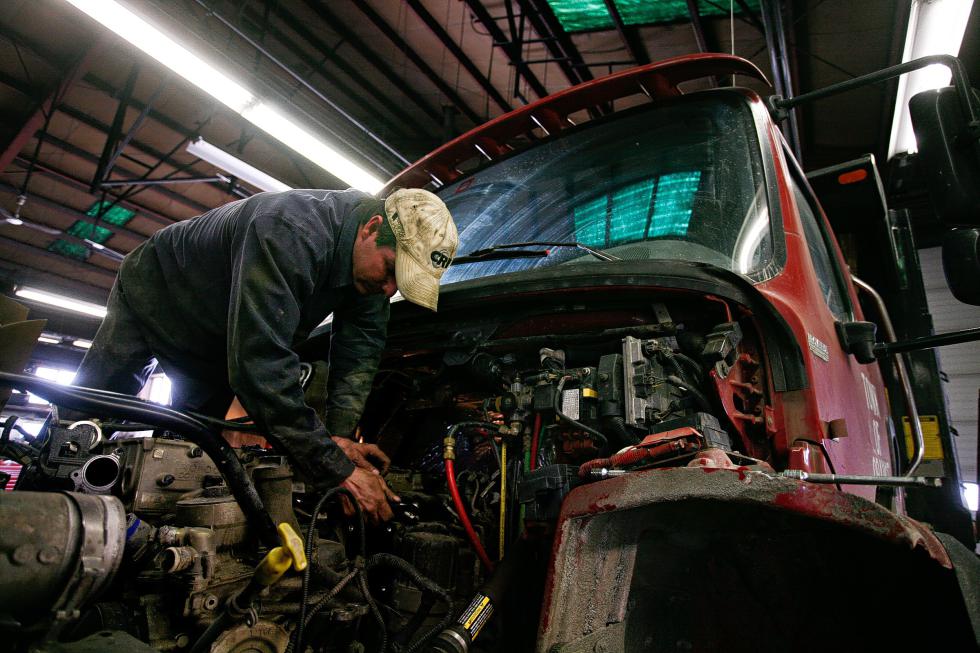 Mechanic Greg Pierce works to replace the head gasket of a town plow truck at the Freightliner dealership in Lebanon, N.H., on April 3, 2015. The building's owner, Champlain Oil, is planning to reconfigure the Heater Road property with an all-new dealership, truck stop and renovated restaurant. (Valley News - Geoff Hansen) <p><i>Copyright Â© Valley News. May not be reprinted or used online without permission. Send requests to permission@vnews.com.</i></p>

Lebanon — The owner of the truck stop off Exit 18 on Interstate 89 is drawing up a plan to redevelop 8 acres on Heater Road into a new truck stop and Jiffy Mart, although it is unclear whether The Fort, the longtime 24-hour restaurant known for its homemade pies and muffins baked on the premises, would remain part of the new complex.

South Burlington-based Champlain Oil Co., owner of two adjoining parcels on Heater Road, has engaged engineering firm Pathways Consulting, of Lebanon, to draft a site-development plan for a new facility to include an expanded truck stop, a Jiffy Mart and a “restaurant concept,” according to company Vice President Bryan Cairns, who said he didn’t know if the restaurant at the site would continue to be The Fort.

“We’re in the due diligence stage,” Cairns said. “We’ve been developing sites in our (company’s) footprint, and this one has a lot of potential.”

Champlain Oil, also known as Coco, owns and operates 32 Jiffy Marts in New Hampshire and Vermont, including nine in the Upper Valley.

Word of the plan is upsetting employees of The Fort, who bemoan the possibility that the popular Upper Valley restaurant might have to find a new location.

“Why would you choose to put a different restaurant here?” asked Ann Corrette, who has worked as a waitress and office manager at The Fort since 1998. “We serve a lot of people from Dartmouth-Hitchcock, Hypertherm. We have really loyal customers. People are like, ‘get a petition!’ ”

The Fort’s “home style cooking” menu features traditional diner fare and serves “breakfast anytime,” including “flatbed specials” that are “sure to fill you right up,” such as two eggs, two pancakes (or french toast) plus sausage and bacon, french fries and toast for $8.95.

She said Fort owner Bob Hazlett has assured the staff he will remain in business, even if it means moving to another location.

But redevelopment of the Heater Road truck stop could be a lengthy process and the restaurant staff’s fears may be premature.

Brooks said “that’s because the uses that are being proposed are not permitted in a light industrial zone. The fact they are there now is because they were put there before the current ordinance was put into effect.” He said the proposal would need to go first before the zoning board and if Champlain gets all the relief it needs, it woul d proceed next to the planning board for approval.

Champlain also owns the adjoining parcel, which is leased to Freightliner of New Hampshire, a dealership and repair facility for tractor-trailer trucks and other big rigs.

Owner Jay Alosa said he looks forward to redevelopment including a bigger facility for Freightliner of New Hampshire so it could handle serving up to 10 trucks simultaneously, compared with the current six it can accommodate.

“We would probably slide toward the back of the property closer to the highway and the front area would for other uses,” Alosa said. “It depends on the permitting. We’re ready to move at any time.”

About 29,000 vehicles a day pass Exit 18 on I-89, according to the New Hampshire Department of Transportation, making it the densest traffic corridor in the Upper Valley.

The current truck stop has a small Jiffy Mart but is better known as the location of The Fort, which for more than 30 years has served not only truckers looking for a meal but also Lebanon-area shift workers and residents seeking weekend breakfasts or those in need of a late-night cup of coffee and slice of fresh coconut cream pie.

Hazlett, The Fort’s owner, said he has been hearing for some time that the property’s owner has been eying redevelopment, although “they haven’t told me anything. … I’m pretty much in the dark.”

He said he would be willing to buy the building from Champlain, although he’s not counting on that happening.

Regardless, Hazlett said, the restaurant has a year remaining on its lease and he’s already been scouting for new location. He said he wanted to “keep it around the same area.”

The Fort, which is open around-the-clock seven days a week, employees between 25 and 30 people, Hazlett said. “I have a lot of single mothers,” he said, who work as waitresses. “If they leave, they come back because the money is good.”

Champlain’s Heater Road property is recorded as two separate lots, each owned by Cairns Brothers Realty Partnership: a 4.77-acre east parcel, on which the Jiffy Mart, The Fort, Citgo brand fuel pumps and truck parking area are located, and an adjacent 3.56 parcel west parcel, where the Freightliner dealership is located. The two parcels have a combined assessed value of $2.4 million, according to Lebanon property records.

Both properties on Heater Road are also near the former Miller Chevrolet Cadillac dealership, which closed in February after the property was sold to Concord Coach Lines for about $3.7 million. Concord plans to relocate its Dartmouth Coach bus service depot from Etna Road to the former auto store lot.

The Exit 18 truck stop is strategically located along a major trucking route between Boston and Montreal. It is one of only two truck fueling locations on I-89 between Concord and Lebanon in New Hampshire, and one of three on I-89 between Lebanon and Burlington, according to TruckMaster.com.

Freightliner of New Hampshire employs about 22 people at its Lebanon site and 46 more at a location in Londonderry. Alosa, whose father, Joe Alosa, owns Yankee Kenworth Trucks in Concord and Nashua, bought the Londonderry franchise in 1997 and added the Lebanon franchise the same year.

Alosa initially rented half the building from its prior owner, Decato Bros. Trucking Co., and later expanded into the other half after the Decato family wound down the 56-year old long-haul business and sold off its assets because it could not longer attract enough drivers. The Decatos subsequently sold the property to Champlain, which owned the adjoining property. Freightliner of New Hampshire has been leasing the property from Champlain ever since.