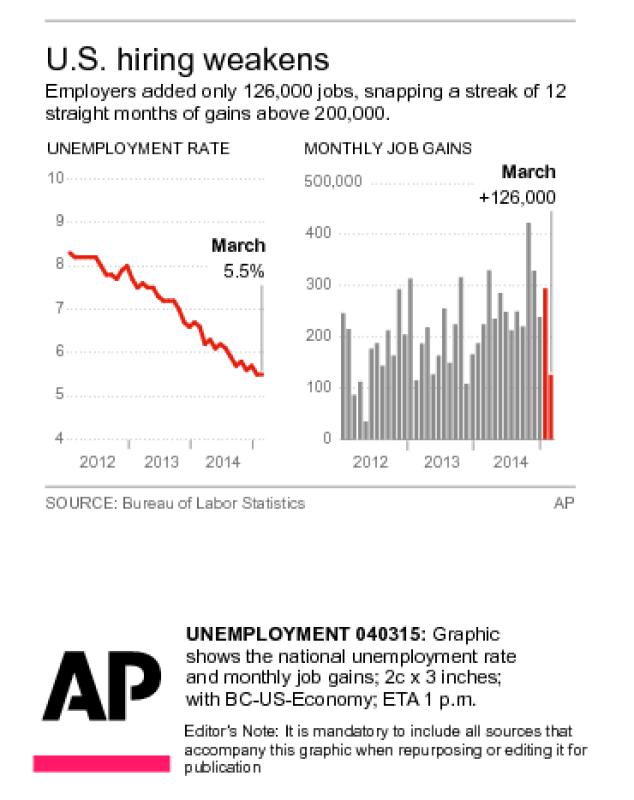 Before you get too glum about the March employment report, consider this: One of the main reasons behind the hiring slowdown was likely something that had little to do with the economy’s underlying strength.

Beneath the disappointment of the economy adding only 126,000 jobs last month — 53,000 below even the most pessimistic projection in the Bloomberg survey of 98 economists — was an unusually cold winter (or technically spring?) in many unfortunate parts of the country.

The chill on the jobs figures was most evident in the Labor Department’s calculation of those unable to work due to inclement weather. Here, we see that March 2015 was a little out of the ordinary: While the historical average for March is about 141,000 workers who can’t work due to poor weather, last month there were about 182,000 who were held back.

That 41,000 difference is an outsized interruption compared with recent years: In March 2010, 135,000 workers couldn’t work because of bad weather, 6,000 below the historical average.

Diving deeper into the data, two industries were primarily responsible for the big hit to staffing last month.

These two industries also happen to be two of the most weather-sensitive, said Nariman Behravesh, chief economist at IHS Inc. in Lexington, Mass. The cold and snow keep builders from breaking ground and many Americans from venturing out for a night on the town.

“Certainly my gut feel is that weather played a big role,” Behravesh said by phone after the report. He estimates the weather hit to payrolls last month at as much as 90,000 — not coincidentally, around the net slowdown from those two industries.

Within leisure and hospitality, restaurants slowed their hiring almost to a standstill. The 8,700 increase in staffs at food and drinking establishments was the smallest tally since June 2012, displayed in the chart below.

Why the hiring slowdown happened matters because those reasons help us forecast future employment growth. Weather is a transitory factor, meaning we can be hopeful that hiring will pick up once it gets a little warmer.

Granted, weather couldn’t be blamed for everything. Manufacturing employers subtracted 1,000 workers from payrolls, weighed down in part by an appreciating dollar that’s making it harder for U.S. businesses to sell goods to overseas customers.

Looking ahead, Behravesh sees reason to be upbeat, with rebounding auto sales the latest sign that consumer spending will bolster growth ahead.