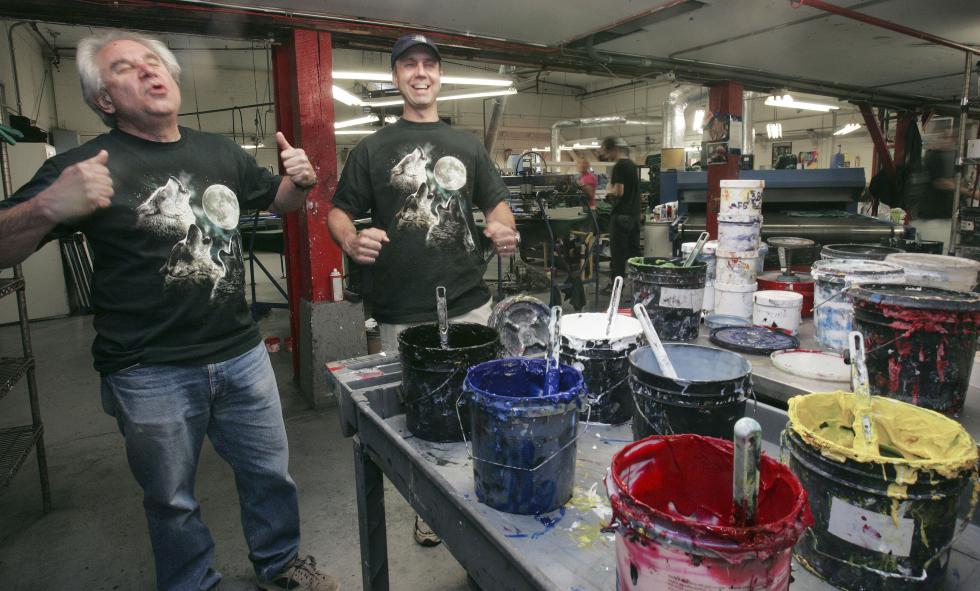 FILE - In this May 28, 2009 file photo, wearing their Three Wolf Moon T-shirts, Mountain Corp. owner Michael Krinsky, left, howls as partner Jeff Grosner laughs in the production area of their T-shirt company, in Marlborough, N.H. Sales for the company have tripled since 2009, after mocking online reviews of the shirt went viral. (AP Photo/Jim Cole, File)

Whether it’s a photo that gets shared on social media like the recent controversy over the color of TheDress or a funny review that gets passed around, sales of products that go viral often skyrocket. And although the sellers struggle at first to deal with the extra attention and demand, the sudden celebrity can boost business for years to come.

Over the course of a few days, the debate over whether a dress sold by Roman Originals, a U.K. clothing-store chain was blue and black or white and gold stirred social networks and led to a frenzy that extended to traditional media. Sales of the frock are up 600 percent since the end of February.

Going viral can make such a difference that some companies look for advice on how to make it happen. “People are more likely to purchase an item if their friend is sharing it online, says Devra Prywes, vice president of marketing at Unruly, a company that advises brands on how to create viral videos. “It’s also free advertising.”

The Cronut’s rise from sweet, flaky creation to household name began in 2013. The mashup of a croissant and doughnut was written up and photographed by food blog Grub Street. It quickly spread online and beyond. “By the end of the first week, we had over 100 people in line,” says chef Dominique Ansel.

At its peak of popularity, 300 people waited outside the Dominique Ansel Bakery in New York daily. A guard was hired to manage the line, which has shrunk back down to about 100 people. These days, waiting customers are treated to free hot chocolate and madeleines, a bite-sized buttery cake. “The Cronut became a way for us to introduce customers to our other products,” says Ansel.

Now the Cronut is headed overseas: A Tokyo bakery is in the works for summer. However, the Cronut isn’t planned for the menu at a second Manhattan shop, called Dominique Ansel Kitchen, which will serve made-to-order desserts when it opens this spring.

A midair brawl broke out last summer when a man used an invention called a Knee Defender to stop a woman in front of him from reclining her seat. The story quickly spread online and off.

“Sales went off the charts,” says Ira Goldman, the inventor of Knee Defender, a $22 gadget that attaches to a passenger’s tray table to prevent the person in front of them from reclining. (It’s not illegal, but U.S. airlines prohibit using it.)

Goldman had to set up a wait list on Knee Defender’s website and he pushed the factory to quickly make more. It was Knee Defender’s second brush with fame: A magazine article a decade ago gave him his biggest sales spike.

“Now, things are back to normal,” says Goldman. “I’m just fascinated by the whole ride that this went on.”

A Los Angeles eatery that catered a televised celebrity pizza party will test its star power in the Middle East. Big Mama’s & Papa’s Pizzeria stole the spotlight at 2014’s Academy Awards show when host Ellen DeGeneres ordered pizza for the audience from one of its stores. Some 44 million people watched as Hunger Games star Jennifer Lawrence chomped on a slice and Julia Roberts, Brad Pitt and Meryl Streep passed the cheesy pizza around on paper plates. Video of the scene was hot online and dozens of media outlets did stories on the pizzeria.

Brothers Aro and Allen Agakhanyan, the owners Big Mama’s, immediately brought in two partners to help expand. Two Big Mama’s & Papa’s Pizzerias are expected to open by the end of this year in Dubai, United Arab Emirates, thanks to a deal with a company that brings international brands to the Middle East.

“It speeded up the process and gave us brand awareness,” says Aro Agakhanyan. “It did help a lot.”

An Amazon.com review mocking a T-shirt made by The Mountain Corp. changed its fortunes. A reviewer wrote that the shirt, which has an illustration of three wolves howling at a full moon, transformed him into a ladies’ man: “I walked from my trailer to Wal-Mart with the shirt on and was immediately approached by women.” More funny reviews followed and soon major media outlets were calling. “It was such a turning point for us,” says co-owner Michael McGloin. “Our free $50 million worldwide advertising campaign.”

Soon, stores that began selling the Three Wolf Moon T-shirt for the first time wanted more styles from the Keene, N.H., company. The Mountain designed more animal shirts and launched a website. Since 2009, sales have tripled.

And in 2013 the company benefited from another review, this time from George Takei of Star Trek fame. The actor wrote his own Amazon review, joking that the shirt helps him dodge autograph seekers at Wal-Mart: “This shirt has changed my life!” he wrote.