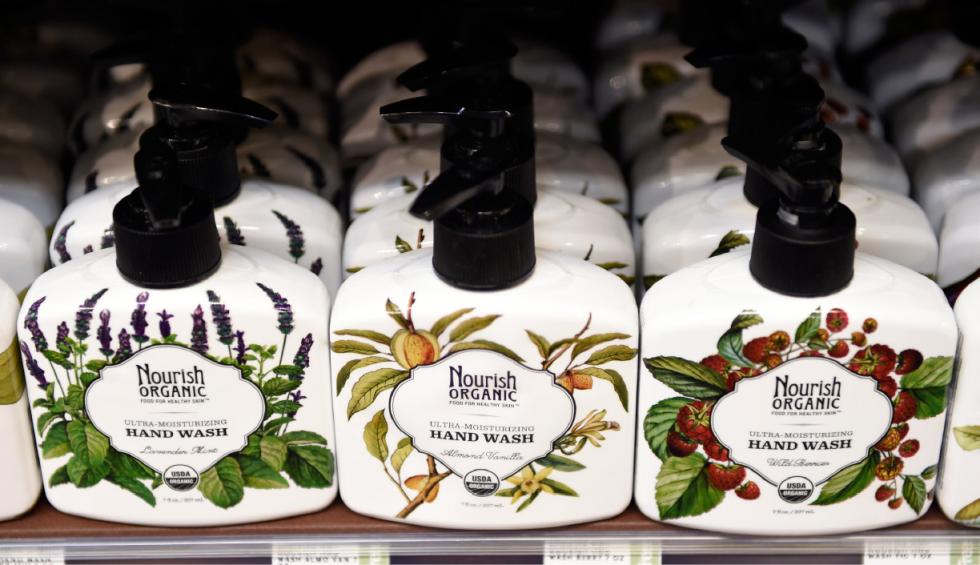 FILE - In this Oct. 9, 2104 file photo, organic body products are seen at a Whole Foods in Washington. Consumer interest in the organic label continues to grow. The organic industry says U.S. sales of their products jumped 11 percent last year alone, to more than $39 billion, despite tight domestic supplies of organic ingredients. And the number of U.S. organic operations has grown by 250 percent since the government started certifying organic products 2002, according to new Agriculture Department data released Wednesday. (AP Photo/Susan Walsh, File)

Sales of organics have been rapidly growing since the United States put strict rules in place and began certifying organic products in 2002. According to the Agriculture Department, the number of U.S. organic operations has more than tripled since then; the number grew 5 percent just last year.

The Organic Trade Association estimated in a report released Wednesday that organics now make up almost 5 percent of total food sales in the United States, with sales for all organic products totaling more than $39 billion last year.

As the industry has grown, giants like General Mills and Kellogg have entered the organic game and many small organic food companies have become large businesses. Laura Batcha, head of the trade association, says that growth has helped the industry move beyond a niche market.

“The only way to create change is for there to be widespread adoption,” Batcha said.

Organic foods generally are grown with fewer chemicals and artificial ingredients and are produced according to a strict set of government standards. A food cannot be labeled organic unless its production adheres to those rules, and those extra steps mean higher prices at the grocery store.

Much of organics’ growth is in nonfood items like textiles and personal care items. The Organic Trade Association says those nonfood sales jumped almost 14 percent last year and totaled more than $3 billion.

Despite its success, the industry is facing some major challenges, including struggles to find enough organic ingredients for its products. Much of the shortage is in organic milk and eggs, due to low U.S. inventories of organic corn and soybeans that feed cattle and poultry. The industry says there have also been some domestic shortages of fruits and vegetables, which make up the largest sector of the organic market, due to difficulties finding enough land suitable for organic farming.

Some of the supply problems trace back to cultural issues in highly agricultural areas, where farmers see organic as disparaging the quality of their conventional product. Growing organics also means you can’t use many herbicides, which many farmers have grown used to as a way to increase crop yields. Another challenge is the three years required to convert a conventional farm operation to organic.

Agriculture Secretary Tom Vilsack says he believes much of the agriculture industry has come around to organics being an important part of the business. He says the department has worked to make programs geared toward conventional producers, like crop insurance, more friendly to organic producers.

“It’s not surprising with the increased demand that you are going to have a tight squeeze” on organic ingredients, Vilsack said.

The industry is also fighting confusion in the marketplace, with many food packages touting “natural” ingredients — a term the industry believes consumers confuse with organic. Partly to combat that, organic producers are pursuing an industry-funded Agriculture Department “checkoff” campaign — think the milk industry’s Got Milk? ads — to promote itself and make those distinctions.

The Organic Trade Association data show sales growth in all areas of the country. But some of the strongest sales remain in the Northeast and on the West Coast, and 73 percent of organic buyers are white. Just 16 percent of those who buy organic are Hispanic and 14 percent are black.

The trade group says sales among minorities have jumped sharply, and note the breakdown closely resembles the demographics of the United States. The industry survey estimates 51 percent of families are buying more organic than they did a year ago.