How London Man May Have Helped Trigger ‘Flash Crash’ 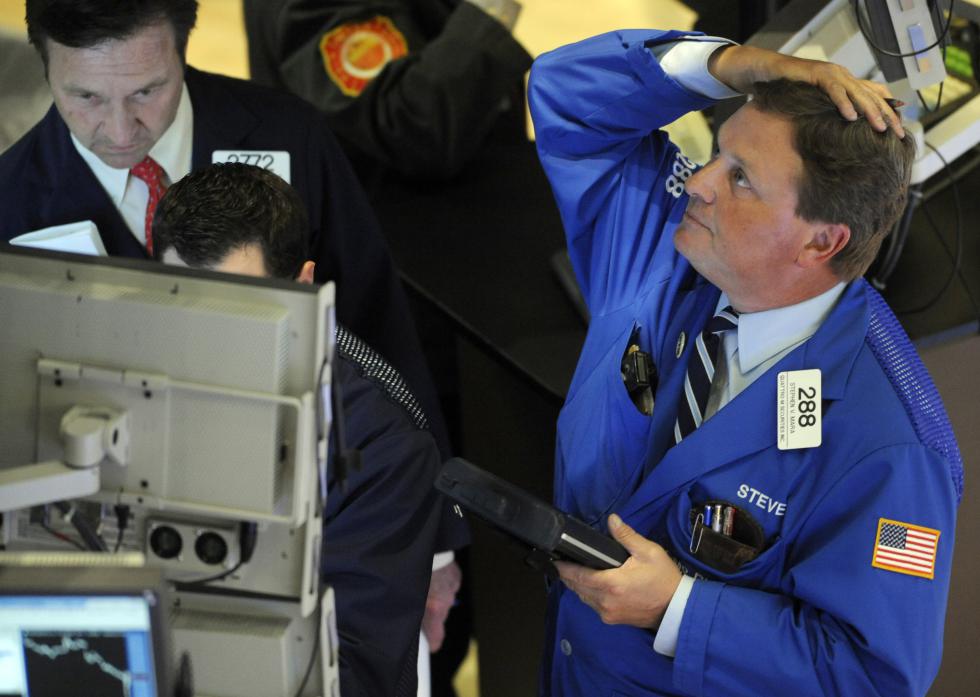 FILE - In this May 6, 2010 file photo, Stephen Mara, of Quattro M Securities, works on the floor of the New York Stock Exchange, in New York. If U.S. authorities are correct, Navinder Singh Sarao, helped set off the flash crash that day, raising fears that its not just big banks and hedge funds that can create chaos on exchanges and wipe out the savings of ordinary investors. (AP Photo/Henny Ray Abrams, File)

New York — He operated from a modest suburban London home he shared with his parents, far from the city’s glamorous financial center. He used off-the-shelf software anyone can buy.

Yet, if U.S. authorities are correct, Navinder Singh Sarao, 36, managed to send a jolt of fear through the world’s markets by helping to set off the 2010 “flash crash,” in which the Dow Jones average plunged 600 points in less than seven minutes.

Just how big a role he played has been hotly debated since the federal complaint was unsealed last week, but the idea that a little-known investor had even a small part is deeply troubling, say traders and market experts.

“If this guy can do it,” asks finance professor James Angel of Georgetown University, “who else is doing it?”

In an age of rapidly advancing computer power, the fear is that it’s not just big banks and hedge funds that can create chaos on exchanges and wipe out the savings of millions of ordinary investors. Someone working from home might be able to do it, too.

“The risks are coming from the small guys who are under the radar,” says Irene Aldridge, managing partner of research firm ABLE Alpha Trading and an expert in the kind of high-speed computerized trading that Sarao did. “The regulators don’t have the real-time tools to monitor them.”

Sarao allegedly employed a ruse called spoofing, a bluffing technique in which traders try to manipulate the price of stocks or other assets by making fake trades to create the impression they want to sell when they really want to buy, or vice versa.

Eric Scott Hunsader, founder of Nanex, a provider of financial data that has documented what it claims are cases of blatant spoofing, says the practice is widespread — in stocks and bonds, oil and gold, cotton and coffee. He says the bluffing is turning markets into a lawless Wild West, despite efforts by trading firms to fight back with software that can sniff out the false trades.

If the allegations against him are true, Sarao may rank among the best of this new breed of bluffers.

His feat was impressive because of the target of his alleged bluffing — investors in E-Mini S&P 500 futures, which are financial contracts that allow you to bet on the rise and fall of the Standard and Poor’s 500 stock index. Passing off a fake trade like that as real, much less moving prices, isn’t easy, because E-Mini is one of the most widely traded, transparent and scrutinized markets in the world.

“Everyone is watching it,” says Manoj Narang, former CEO of Tradeworx, a high-frequency trading firm.

A key to spoofing is placing large orders to sell or buy without ever executing them. Since other traders can see your orders, a large one to sell might convince them prices are likely to head down. One to buy might make them think prices are likely to rise. So they will often mimic your order, which moves prices up or down, as if you had sold or bought yourself.

Next, you cancel your order, and do the opposite — buying at the new, artificially lower price or selling at the new higher one.

The advent of high-frequency trading firms has added a level of sophistication and speed to this bluffing technique.

Using computers to sift through news articles, social media feeds and other data in split seconds, these firms are able to snatch tiny, fleeting profits that mere mortals can’t spot. The firms can also bluff fast, sending a series of sell orders, for instance, then canceling them as the price moves down and replacing them with new orders — all within thousandths of a second.

The complaint against Sarao says it was just this sort of lightning-fast spoofing, called dynamic layering, that allowed him to make nearly $880,000 on May 6, 2010, the day of the flash crash.

“This is the equivalent of an elephant coming to a tea party,” says Nanex’s Hunsader. “It’s hard not to spot.”

Stocks lost $1 trillion in value during the flash crash. The market bounced back by the close of trading, but the breadth and speed of the drop rattled investors and regulators alike.

British-born Sarao, a former bank employee and Brunel University student, is charged with fraud, commodities manipulation and other offenses. He was arrested in London on Tuesday and indicated. Sarao will fight extradition to the U.S.

In court, his lawyer said the arrest came as a “bolt from the blue” to Sarao. The attorney did not respond to requests for comment for this article.

Between 2010 and 2014, Sarao earned $40 million on E-Mini trading alone, according to authorities, though the complaint doesn’t say how much of that was through allegedly illegal trades.

He also says Sarao’s allegedly bogus sell orders were often too far from the prevailing prices for traders to take seriously. In fact, Narang wonders if Sarao played much of a role at all in the flash crash.

Larry Tabb, CEO of financial markets consultancy TABB Group, has his doubts, too: “I don’t think that what he was doing on a normal day would have any impact on the markets.”

A regulatory review after the flash crash found that the market was vulnerable to a plunge that day because a computerized selling program at a mutual fund had run amok.

Spoofing was prohibited by the Dodd-Frank law in 2010, the Wall Street overhaul enacted after the financial crisis. But what is spoofing and what is legitimate trading is sometimes hard to pin down. Traders cancel orders all the time because of new information. It’s the intent to fool others, not the canceling itself, that is illegal.

Still, regulators are starting to crack down. In January, a Canadian trader was arrested on spoofing charges. That followed charges against a New Jersey trader who allegedly made $1.5 million entering false trades in the gold, soybean oil and copper markets.

The criminal charges are not coming fast enough, though, for Nanex’s Hunsader, who thinks spoofing is rampant and far too easy to pull off. After all, if Sarao really did help crash the market, he asks, why not “a terrorist cell or someone with deeper pockets?”