FILE - In this Dec. 19, 2014 file photo, oil pump jacks work in unison, in Williston, N.D. In the year since the energy industry last gathered in for its big annual confab in Houston, prices for oil and natural gas took a dive that few, if anyone, saw coming. In 2015, natural gas has fallen even further than oil as U.S. drillers have been producing enormous amounts of gas and mild winter weather kept demand relatively low. (AP Photo/Eric Gay, File) 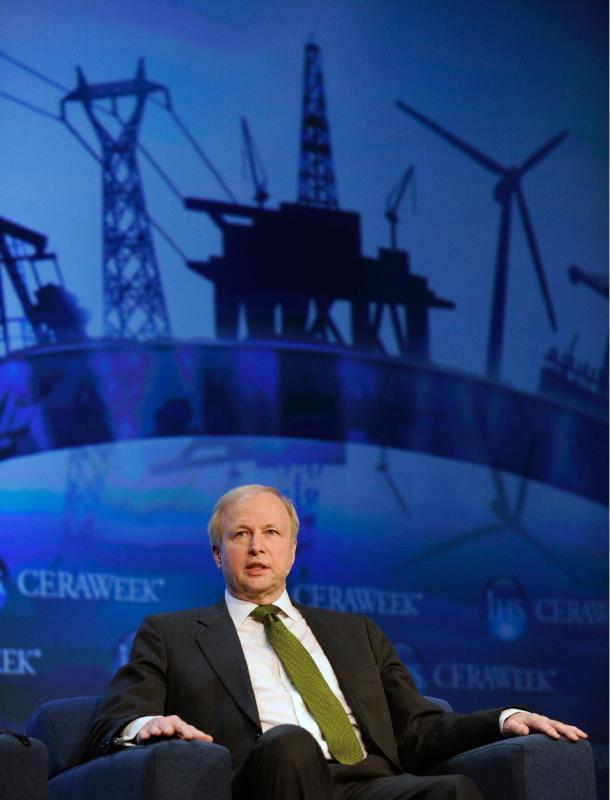 Houston — In the year since the energy industry last gathered in for its big annual confab in Houston, prices for oil and natural gas took a dive that few, if anyone, saw coming.

A chastened parade of energy executives, analysts, academics and government officials from several countries delivered speeches and participated in panels as part of CERAWeek, the energy conference sponsored by IHS, an Englewood Colo.-based business information and analytics provider Most worried over prices and making a profit, and speculated on what it could all mean for economies and consumers around the world.

Here are five major themes from this year’s conference:

Speaker after speaker here said that prices for oil, gasoline and diesel will remain far below where they had been for much of this decade.

“Lower for longer,” is how BP CEO Bob Dudley described it. Exxon CEO Rex Tillerson said: “This is going to be with us for a while.”

IHS’s Kurt Barrow expects oil prices to maybe climb back to $65 a barrel by the end of the year. Adam Sieminski, administrator of the U.S. Energy Information Administration, expects oil to average $60 this year. The average price for U.S. oil topped $90 from 2011 through 2014.

Natural gas has fallen even further than oil as U.S. drillers have been producing enormous amounts of gas and mild winter weather kept demand relatively low.

The oil and gas executives delivered this news grimly, but people who use their products are likely to be delighted.

Low natural gas prices mean lower heating costs for the half of U.S. households that use natural gas for heat, and they also translate directly to lower electricity prices in many areas. And U.S. households will save about $700 this year on lower gasoline expenses, according to government estimates. As of Friday, a gallon of regular in the U.S. averaged $2.51, compared with $3.69 a year ago.

“There is some really good news for consumers,” Sieminski said.

Banking on the Boom

The U.S. oil industry is hurting but its financial backers haven’t panicked.

Often, oil and gas prices decline because of a weak economy. This time the economy is growing. Bankers and investors are flush with cash, and appear willing to wait out the low prices to benefit from a turnaround.

This may have a perverse effect, however. Companies will have the resources to get right back to work as soon as prices rise, and a quick rise in production could stanch a large increase in oil prices.

The CEOs of BP, Total and the pipeline company Kinder Morgan all said they thought company valuations were still too high, but could fall if oil and gas prices stay low for another year or two.

“We certainly have the firepower and the interest,” said Kinder Morgan CEO Richard Kinder.

Complaints about government rules and regulations were especially shrill this year, because many cost companies money that is suddenly in short supply. Oil companies took particular aim at the 1970s-era ban on crude oil exports.

U.S. crude oil is selling for much lower prices than crude elsewhere in the world — and crimping producers’ revenue — in part because it can’t be exported.

They want the ban to be lifted, arguing that lower U.S. crude prices don’t translate to lower fuel prices for consumers. Thant’s because exports of gasoline, diesel and jet fuel are not restricted so they fetch prices based on the global price of crude.

The big issue for the electric power industry is a coming EPA rule that will force them to reduce emissions of carbon dioxide. Most expect the rule to result in higher power prices for customers. Executives raised the specter of greater risk of blackouts because many power plants could be forced to close.

Power producers professed a willingness and ability to comply with the rule, but want more time.

They have dozens of other complaints about parts of the proposed rule, such as a limit to the credit nuclear power plants get for producing carbon dioxide-free power.

EPA administrator Gina McCarthy was on hand to deliver a rebuttal, promising the final rule will account for those concerns. She recalled that the industry figured out how to comply with previous rules.

“You need to give yourselves more credit,” she said. “You know how to innovate.”

Chaos in the Middle East

The most important oil-producing region in the world is facing unprecedented upheaval, with conflicts raging in Libya, Yemen, Iraq, Syria and elsewhere.

“I don’t think we have seen in the last 30 years so many conflicts at the same time,” said Patrick Pouyanne, CEO of the French oil giant Total.

Given the turmoil, Pouyanne and others expressed surprise that the price of oil was holding relatively steady. Executives pointed to possible further supply disruptions in the region as the biggest — and very real — threat to low oil prices.

On the other hand, the Middle East could be the source of even more oil very soon. The potential deal between the U.S. and Iran over Iran’s nuclear development could result in a sharp increase in Iranian oil exports, adding even more crude to an over-supplied market.