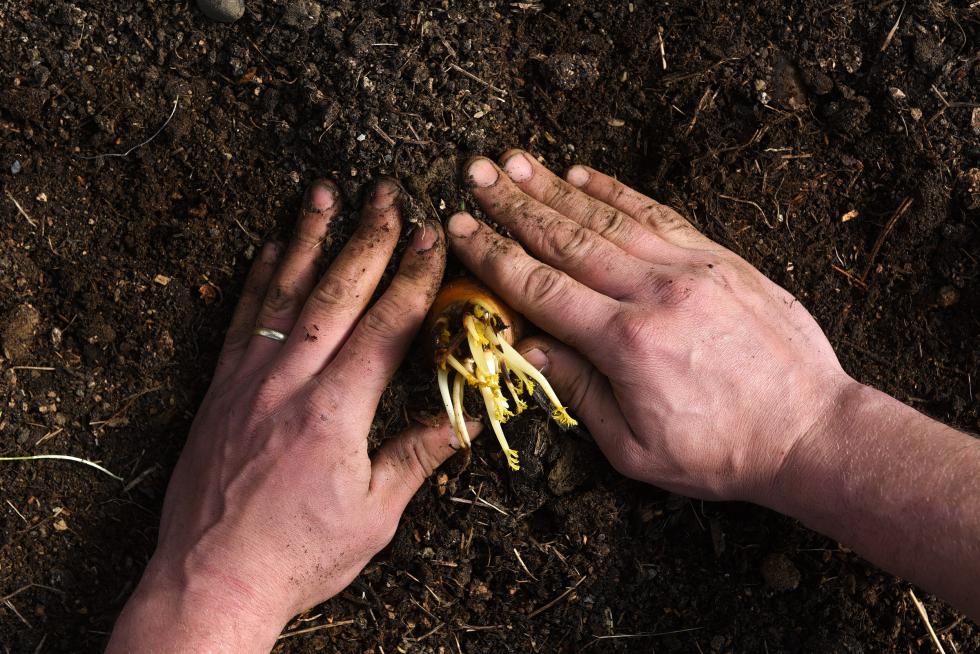 Brian Stroffolino presses soil into place around a carrot that will produce a tall plant and yield seeds for next year Tuesday, April 14, 2015. Stroffolino hopes to someday be producing all of his own seed. "The annuals are almost more of a transition for us until the trees start producing," said Stroffolino who takes a permaculture approach to his farm, planting fruit trees and shrubs that will produce perennially. (Valley News - James M. Patterson) <p><i>Copyright Â© Valley News. May not be reprinted or used online without permission. Send requests to permission@vnews.com.</i></p>

If it seems as though you can’t reach for a head of lettuce or pint of strawberries these days without running into a new farmer, well, you’re right. The number of farms, the number of farmers, and the acreage devoted to farming are all increasing in the Upper Valley, reversing a centurylong trend that began before the Great Depression.

In Vermont, the number of farms rose to 7,338 in 2012, according to the USDA’s Census of Agriculture, after bottoming out at 5,436 in 1992. The acreage in farming increased to 1.25 million acres, up 20,000 acres from just five years ago. The Vermont Sustainable Jobs Fund reports that the food sector in Vermont (including food service as well as food production) has increased 24 percent since 2007, adding $1.7 billion new output to the state’s economy and more than 5,000 jobs.

What’s going on here? Wasn’t farming in the Upper Valley left for dead a long time ago?

Sure, the average farmer is getting older — about 57 in the Twin States in 2012, up from about 53 in 1997. But word of agriculture’s demise has always been, in the words of Mark Twain, greatly exaggerated. Vermont, for example, is producing more milk these days than it did a century ago, back when Holsteins and Jerseys were more abundant than people. This comes primarily from the growth of large farms, totaling 500 acres or more, some milking more than 1,000 head, using advanced breeding and genetics. Where you used to drive up the Connecticut River and see cows, you now see corn land and hay fields. That land is still feeding cows, just ones who now live on larger dairies located farther north or south along the river.

The myth of New England’s terrible soils has also been oversold. Many of our river-bottom soils here in the valley are classified as USDA “prime,” meaning that they’re in the top tier of soils nationally and yield just as well as the deep loams of the Midwest. We certainly have plenty of boney hillside farmland that has (rightly) been abandoned over the past century, but we also have a good supply of some of the best land in the world.

These good soils are partly responsible for the other major engine of the local farming economy: the growth of very small operations. Farms with fewer than 50 acres have nearly tripled since their most recent nadir in 1982, and most of these farms are selling food directly to the people who are going to eat it.

Direct sales are the key to the agricultural renaissance in the Upper Valley.

We don’t do “big ag” very well here in northern New England, with our small valleys and tight landforms. Small is where it’s at, and, as it happens, small is in vogue these days. Partly that’s on the consumer end, where more people are willing to pay a premium price for an apple or tomato that’s fresher and has more flavor than a similar item attached to the tail end of an industrial food chain. Customers also have a perception of increased safety, since many local farmers know their customers personally and have a strong incentive to produce the highest quality product possible.

Another trend making small farms more competitive is the reduction in subsidies enjoyed by big farms. In the case of fruits and vegetables, that subsidy has been less about direct payments from the USDA and more about the taxpayers’ diminishing appetite for building interstate highways (that reduce transportation costs) and vast irrigation networks (that reduce production costs.) The drought in California will ultimately benefit farming in the Upper Valley: Local farmers need to charge about $3 a head for lettuce to make a profit, and that $3 will look increasingly good as the price of industrial lettuce in the supermarket starts to approach it.

Besides changing markets, the growth of farming in Vermont and New Hampshire is also the result of technological improvements that have made small farms more efficient. Chief among these are hoop houses, those unheated, steel-and-plastic greenhouses that are proliferating around the valley like mushrooms after a rain. For perhaps 20 percent of what it would have cost you a generation ago to put up a wood-and-glass greenhouse, you can now erect a simple hoop house that protects crops from violent weather, allows warm-season crops (like tomatoes) to be grown more successfully, and even allows the winter growing of hearty greens like spinach and kale.

Finally, the local farming scene is expanding because more people are interested in becoming farmers. It’s not a profession for the faint of heart: for farmhands, the pay is rarely more than a few dollars above minimum, and for farm owners, the margins are small and the capital outlay is large. As the USDA data shows, many farm owners never fully quit their day jobs. But for the type of person for whom being outside is a pleasure and being inside a punishment, the resurgence of the Upper Valley farm community is a welcome opportunity.