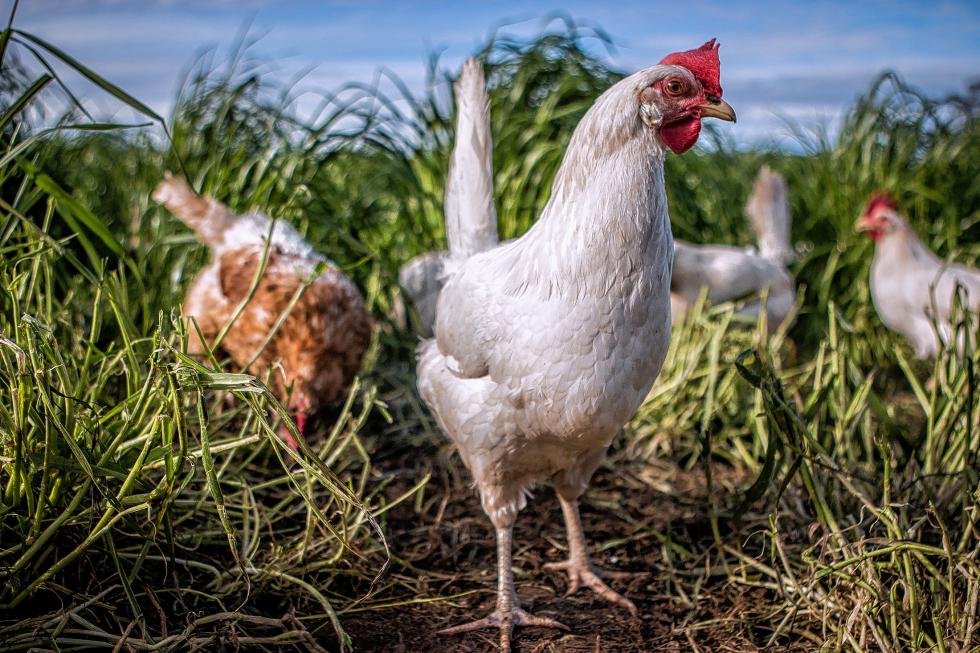 In 2006, Michael Cox, a chicken farmer in northwest Arkansas, faced a choice that many farmers do: Grow or die. His family had been raising chickens for three generations, first for agriculture behemoth Cargill and then for themselves. Even with 800,000 laying hens, Cox was not big enough to compete: “We were planning our funeral,” he said.

Cox, who was then 25, switched some of the family’s production to organic, which brought premium prices.

Then, in 2009, he heard about a Texas startup called Vital Farms that wanted to produce pasture-raised eggs and sell them across the country. “Here were guys doing something completely different,” Cox remembers. “It was just crazy enough to work.” He signed on to raise 5,000 chickens.

Since then, Vital Farms has nearly doubled in size each year. What started as a farm outside Austin with just a few thousand birds now works with about 60 farms and produces 1.5 million eggs every week. The eggs, which cost from $4.99 to $8.99 a dozen, are sold across the country in Whole Foods Markets and other natural-foods grocers, as well as in some mainstream stores, including Safeway and Kroger.

Vital Farms’ national distribution lets consumers who live in cold climates like the Northeast have access to pasture-raised eggs year-round. (Chickens can’t graze on pasture if there’s no grass.)

Moreover, it is proof that companies don’t have to compromise on animal welfare, or on how much they pay farmers, to compete in the marketplace.

“We set out to build a big business without compromise,” said Jason Jones, Vital Farms’ president. Added founder and chief executive Matt O’Hayer, “Our job is to show people that an egg is not just an egg.”

Proposition 2, a new California regulation that mandates that all eggs sold in the state come from hens with enough room to extend their limbs and turn around freely, has raised consumer awareness (while also scrambling the conventional egg industry’s business). But consumers remain confused about egg labels.

According to a survey commissioned by Vital Farms, fewer than half of consumers are familiar with the term “pasture-raised,” and the majority thought that “cage-free” and “free-range” mean the birds have been raised outdoors.

In fact, none of those labels has an official definition, but in practice, they are very different. Cage-free hens are housed on an average of one square foot of indoor space and never go outdoors. Free-range hens get an average of two square feet of outdoor space. A Vital Farms laying hen spends most of her day outdoors, weather permitting, and is allotted 108 square feet of outdoor space, a standard that translates to 10 acres for 4,000 birds.

O’Hayer, a youthful 59-year-old with bright blue eyes and a permanent tan, calls himself a serial entrepreneur — and this isn’t his first time in the egg business.

In 1968, when he was in junior high school, he delivered eggs to friends and neighbors in Providence, R.I., a job that earned him more than his previous six-day-a-week paper route had.

But it wasn’t until he raised backyard chickens in the 1980s that he saw firsthand how a hen’s diet affected the quality of her eggs: If the birds ate only corn, which makes up the majority of commercial feed, the yolks were pale and bland. If he threw some grass clippings over the fence, the yolks turned gold and had a deeper flavor.

If the company’s standards seemed Pollyanna-ish when it launched in 2007, Vital Farms had an important backer: Whole Foods. From the beginning, the chain’s flagship store in Austin carried its eggs. In 2009, Whole Foods offered a low-interest $100,000 loan to buy feed bins, a tractor and other equipment. In the early days, it was tricky to meet demand, even for a few stores.

“We’d be short a few dozen and we’d have to go back through the henhouse and beg the girls to lay a few more,” O’Hayer remembered with a laugh.

Signing up Michael Cox helped alleviate the supply problem, and not only because it doubled the number of hens producing for Vital Farms. Cox was key in bringing new farmers to the company. In part, it was because Cox had standing in the community. But mostly it was because the numbers made sense: Vital Farms won’t detail just how much it pays farmers, but by signing up with the company, a farmer previously raising 16,000 birds could cut back to just 4,000 and still earn 25 percent to 35 percent more than before.

Today, Vital Farms works with nearly 40 farms in Missouri and Arkansas. It also has clusters of farmers in Georgia and is building supply in Texas. Recently, O’Hayer met with 28 farmers in Detroit, Texas; nearly three-quarters of them signed up to explore working with Vital Farms.

Of course, raising hens the Vital Farms way makes for a pricey egg. Their pasture-raised organic eggs (the “organic” label means that any supplemental feed is certified organic) can cost as much as $8.99 a dozen compared to $4.69 for standard organic eggs. Even its conventional ones, called Al Fresco, go for more than twice as much as eggs from caged hens.

(The company also sells eggs from hens whose feed is not genetically modified; they are available only at Whole Foods.)

To that end, Vital Farms works hard to get out its message. Some of its packaging is designed by David Byrd, a fan of the company who is famous for creating psychedelic posters for Jimi Hendrix.

Each dozen eggs includes a mini-newspaper, the Vital Times (motto: The Most Egg-Cellent News on the Planet!), that explains, say, what the hens are fed or how drought affects the color of the yolks.

At Kroger, where Vital Farms eggs are available in five of the chain’s 17 regions, a spokesman said they have been a “bigger hit than expected.” Kroger plans to offer Vital Farms eggs in nearly all of its stores by the end of the year.

Eggs are on a roll. In 2014, Americans ate an average of 263 eggs per capita, a 30-year high, according to the U.S. Department of Agriculture. Specialty eggs, which include cage-free, free-range, organic and pasture-raised, have seen the sharpest growth, said Kevin Burkum, senior vice president of marketing at the American Egg Board. “It’s still a relatively small segment of the market, but that doesn’t make it any less important,” he said. “I think it’s terrific that whatever egg consumers might want is available.”

The Vital Farms brand inspires loyalty normally reserved for companies like Apple or Nike. Maurice Sinnett, a retired newspaper pressman who lives on Whidbey Island, Wash., is a case in point. He and his wife used to buy Vital Farms eggs at a nearby Safeway. When it closed after a merger with rival chain Albertsons, Sinnett went looking there for Vital Farms. But Albertsons hadn’t picked up the brand. So Sinnett started shopping at a local chain, Haggen.

“It may seem crazy to change stores just for the eggs, but we think they are just that good,” he said.

Sinnett likes the richer yolk. But mostly, he is motivated by the company’s respect for animal welfare. “There’s a humane way to do things and the ‘I-don’t-give-a-damn-I’m-at-the-top-of-the-food-chain way,’ ” he said, adding: “A woman recently asked me how could I pay $6 a dozen for eggs. My answer was, ‘How much do you pay for a cup of coffee at Starbucks?’ ”