The Computer Heat Is Off, Maybe 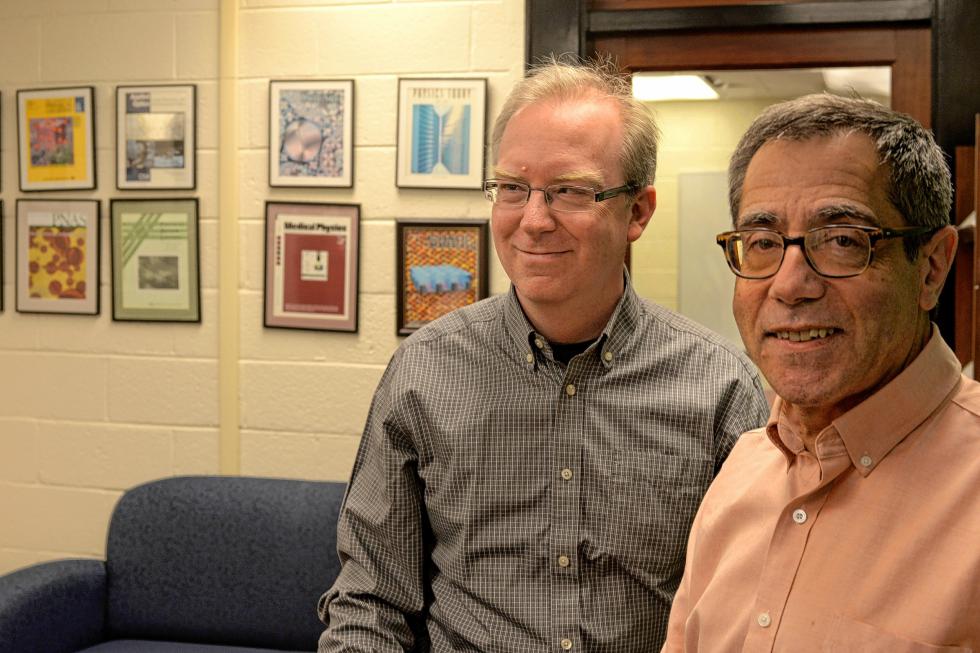 University of Pennsylvania physicists Charles Kane, left, and Eugene Mele, right, pose in their office on April 16, 2015 in Philadelphia, Pa. They've introduced a new class of materials known as topological insulators that in addition to allowing the production of electronic devices with better efficiency (and less heat in your laptop computer), also are expected to be useful in the creation of superfast "quantum" computers. (Tom Gralish/Philadelphia Inquirer/TNS)

Philadelphia — The concentrated heat radiating from your laptop. The sudden roar of the cooling fan from inside your desktop computer.

Familiar signs of wasted energy, caused largely by the increasing numbers of transistors crammed into the innards of our electronic gadgets.

As you reach once again for that charging cable, be aware that an amiable pair of University of Pennsylvania physicists may have hit on the beginnings of a solution: a new kind of material called topological insulators.

It could take years, even decades, before these compounds are used in devices, and they represent just one of multiple ideas for how to take computers to the next level. But Charles L. Kane and Eugene J. Mele already are racking up awards for their work, receiving the latest last week at the Franklin Institute, a science museum in Philadelphia that houses the Benjamin Franklin National Memorial.

Though no computer designer is quite sure yet how to use topological insulators, they have sparked intense interest for their unusual properties. The materials act as insulators on their interiors, but they conduct electricity on their exteriors in a way that dissipates very little heat.

The underlying physics is a bit advanced for everyday conversation. But the key is that these materials force electrons to move in an orderly fashion, with none of the usual chaos and backscattering, said Kane, who arrived at Penn in 1991.

“It’s sort of like a divided highway for the electrons, so they don’t bounce into things,” Kane said. “They just keep going straight in their lane.”

It is difficult to predict how much such materials might help with the energy equation in computers, said George K. Thiruvathukal, a computer science professor at Loyola University in Chicago.

But he said it is reasonable to speculate that they could boost battery life in the range of 25 percent — provided that someone can get them to work, and that they are then adopted by computer makers.

“It has to work its way into the manufacturing process, and that often is a lot easier said than done,” said Thiruvathukal, editor of Computing in Science and Engineering, a magazine published by the IEEE engineering society. Some have proposed that the materials be used to make “interconnects,” the short wires that connect transistors, while another possibility is that they would be used in the transistors themselves.

Kane got into physics through his early interest in math. He grew up in Iowa City, Iowa, and remembers lying awake in bed thinking about equations. He earned an undergraduate degree in physics at the University of Chicago and a Ph.D. from the Massachusetts Institute of Technology.

Mele, whom Kane sees as his mentor, also earned his doctorate at MIT. But as an undergraduate at St. Joseph’s University in Philadelphia, Mele initially was not sure if he would pursue physics or something far different.

“The two most charismatic guys that taught me in high school taught, as it turns out, English and physics,” he said. But at St. Joe’s, Mele recalled, “in the first year, I was way better at physics than at English, so that sort of made the call for me.”

Unusually, the two used theoretical calculations to predict that topological insulators should exist. It was only later that other scientists actually found them, in the form of a sandwich-type structure of the elements mercury, cadmium, and tellurium.

“It was really backwards,” Kane said.

“This is a field which has been driven by the theory,” agreed Princeton University physicist Ali Yazdani, who spoke at a recent Temple University symposium in honor of Kane and Mele.

The pair’s initial paper on the insulators, published in 2005, involved a two-dimensional form of the materials. They later showed how 3-D forms were possible, and those have since been created. If the materials can be used to make more efficient computers, it would be big, said Mark Hempstead, head of Drexel University’s Power-Aware Computing Lab.

This month is the 50th anniversary of Moore’s Law, the famous prediction that the number of transistors on a computer chip would double every year or two.

Some are predicting that the law has run its course, limited by the increasing amounts of heat generated in today’s machines. Among other issues, heat makes computers run more slowly, and certain components wear out faster, Hempstead said.

But the demise of Moore’s Law has been forecast before, and innovation always seems to find a way. If computers continue to get ever smaller and faster, the credit might go someday to a couple of physicists who predicted the existence of a new material before it was discovered.