Keeping an Eye on Mom and Dad 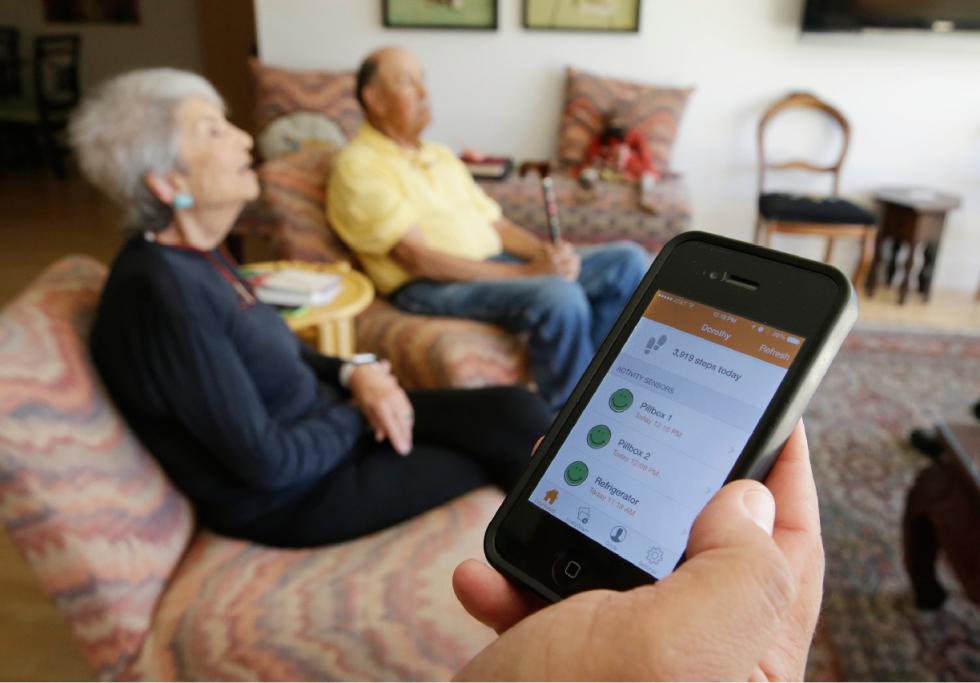 In this March 17, 2015 photo, Phil Dworsky shows off an app on his phone that displays the movements of his parents, Dorothy, 80, left, and Bill Dworsky, 81, rear, at their home in San Francisco. Each time an elder Dworksy opens the refrigerator, closes the bathroom door or lifts the lid on a pill container, tiny sensors in their home make notes on a digital logbook, which the younger Dworsky monitors daily on his smartphone. (AP Photo/Eric Risberg) 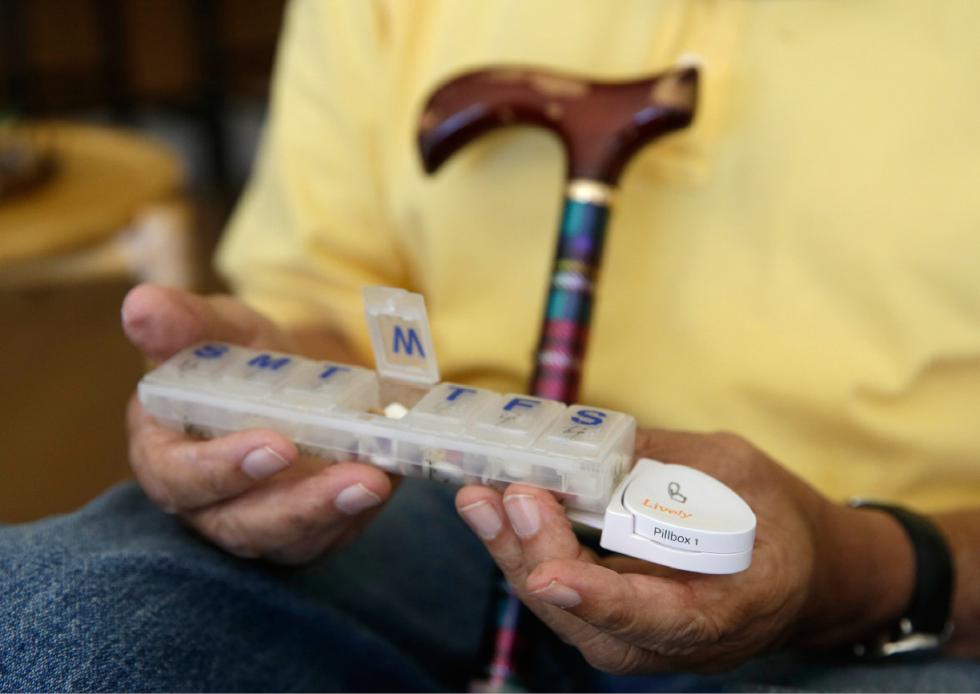 In this March 17, 2015 photo, 81-year-old Bill Dworsky holds his pill container with a motion sensor attached at his home in San Francisco. Each time Bill or his 80-year-old wife, Dorothy, opens the refrigerator, closes the bathroom door, or lifts the lid on a pill container, tiny sensors in their home make notes on a digital logbook, which their son Phil Dworsky monitors daily on his smartphone. (AP Photo/Eric Risberg)

San Francisco — Each time 81-year-old Bill Dworsky or his 80-year-old wife Dorothy opens the refrigerator, closes the bathroom door or lifts the lid on a pill container, tiny sensors in their San Francisco home make notes on a digital logbook.

The couple’s 53-year-old son, Phil, checks it daily on his smartphone. If there’s no activity during a designated time, the younger Dworsky gets an automated email, so he can decide whether to call or stop by. “This is peace of mind, really,” he says of the system he installed last year.

The Silicon Valley tech executive lives just across town, but the sensors help him keep an eye on his aging parents while also raising a teenage daughter and frequently traveling for work. While his parents don’t need a lot of assistance, they have stopped driving and his father uses a cane.

“I want to be in the position where I will know when I need to step in,” he says.

Advances in low-cost sensors and wireless networks are fueling a boom in the so-called “smart” home. And companies are looking beyond home security and temperature control to creating products for Baby Boomers trying to balance caring for aging parents and respecting their independence. It’s a new twist on the notion of personal alarms, such as the Life Alert system that gained popularity with “Help, I’ve fallen and can’t get up” advertisements.

These systems often use simple, inexpensive components such as accelerometers that know when an object is moved. Others use small power sensors to track electricity use or contact circuits that tell when a door is open or closed.

Companies like Lively, Evermind and BeClose charge $50 to $300 for a set of sensors and $30 to $70 a month for wireless monitoring. Each promises to safeguard clients’ personal information.

A set of motion sensors from San Francisco-based Lively seemed right for the Dworskys, whose son calls them “fiercely independent.” Before hearing about Lively, Phil had raised the idea of a webcam in their home. “They immediately didn’t want it. It was a privacy violation,” he said. But they agreed to sensors that collect “a more limited set of information.”

Dorothy doesn’t think much about the system tracking her daily routine. “It’s un-intrusive. That’s what we like about it,” she said. “We want to be able to stay in our home, and this is one way that makes it possible.”

Electronic tracking does raise issues around dignity and privacy, says Dr. Christine Ritchie, a geriatrics professor at the University of California, San Francisco.

She believes some concerns will diminish as more people get used to using fitness bands, “smart” thermostats and other gadgets that track their daily lives, though. And independence is attractive.

“Many of my older patients would be totally unenthusiastic about having anyone monitor any part of their life,” says Ritchie. “But some would be grateful for the prospect of continuing to live in their own home, rather than an institution where they have less control.”

Michigan resident Vicki White, 62, was taken aback when her daughter, who lives in Florida, suggested an Evermind system that uses power sensors to track how often appliances such as coffee makers, lamps or televisions are used. White’s health is good, but she lives in a rural area without close neighbors. White’s own mother had lived alone and struggled with Alzheimer’s disease that wasn’t detected right away.

“I thought maybe she thought I was flipping out,” White says of her daughter, 42-year-old Melanie Champion. “She explained that she just wanted to know I was OK and my routine was as it should be. It’s actually very comforting because I know she’s concerned.”

An app on Champion’s smartphone shows when her mother starts her coffee pot in the morning and when she turns off the TV before going to bed at night.

“It’s really nice, except she wants to lecture me about how late I stay up at night,” White laughs. “I have to reassure her that I fell asleep on the couch.”

Before installing sensors, seniors and their families should have a frank talk about privacy and how much help they need, say experts.

“This type of technology can help, but it’s not the only answer or solution,” says Lynn Friss Feinberg of the American Association of Retired Persons. “Older adults need conversation, social engagement and access to a range of supportive services. And hugs.”