‘A Fascinating Story of Engineering’: Salvaging a Piece of Claremont’s Agricultural History 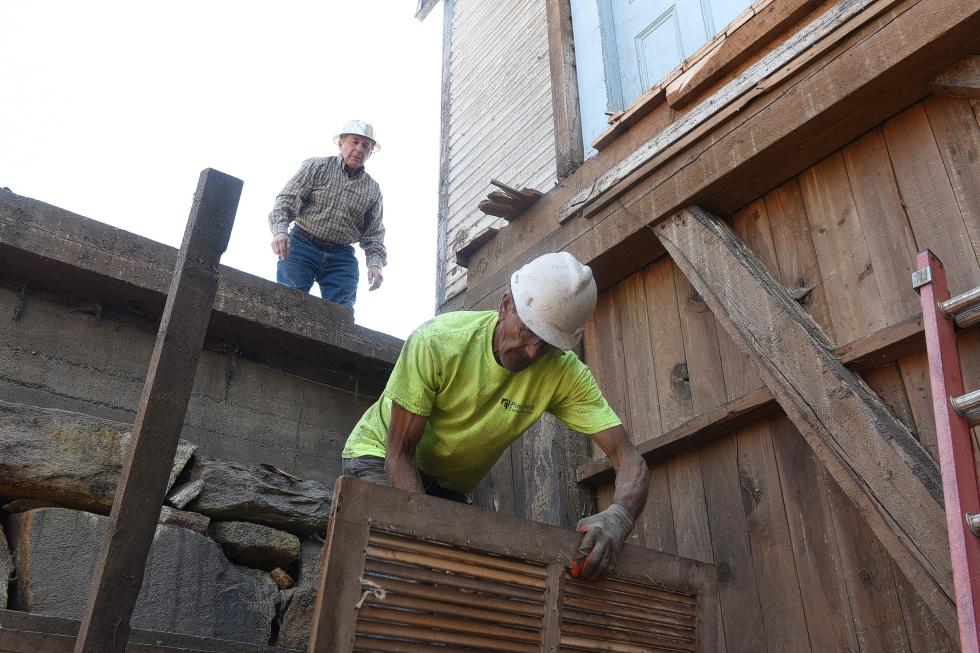 Gerry DeMuro, left, watches in anticipation as Russell Bishop, of Pine Hill Construction, installs doors on a100-year-old year old "bolter" used to grind grain in the basement of a former mill on Pleasant Street in Claremont, N.H., on May 6, 2015. (Valley News - Sarah Priestap) <p><i>Copyright © Valley News. May not be reprinted or used online without permission. Send requests to permission@vnews.com.</i></p> 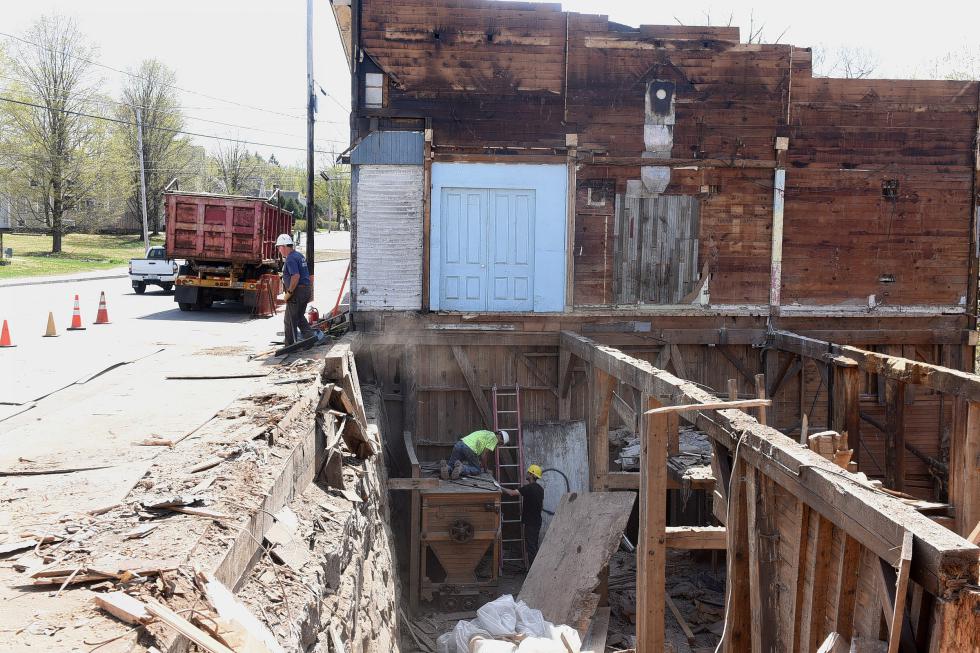 Pine Hill Construction workers prepare a century-old grain bolter, that has sat unused for decades in the basement of a former mill building in Claremont, N.H., on May 6, 2015. (Valley News - Sarah Priestap) <p><i>Copyright © Valley News. May not be reprinted or used online without permission. Send requests to permission@vnews.com.</i></p> 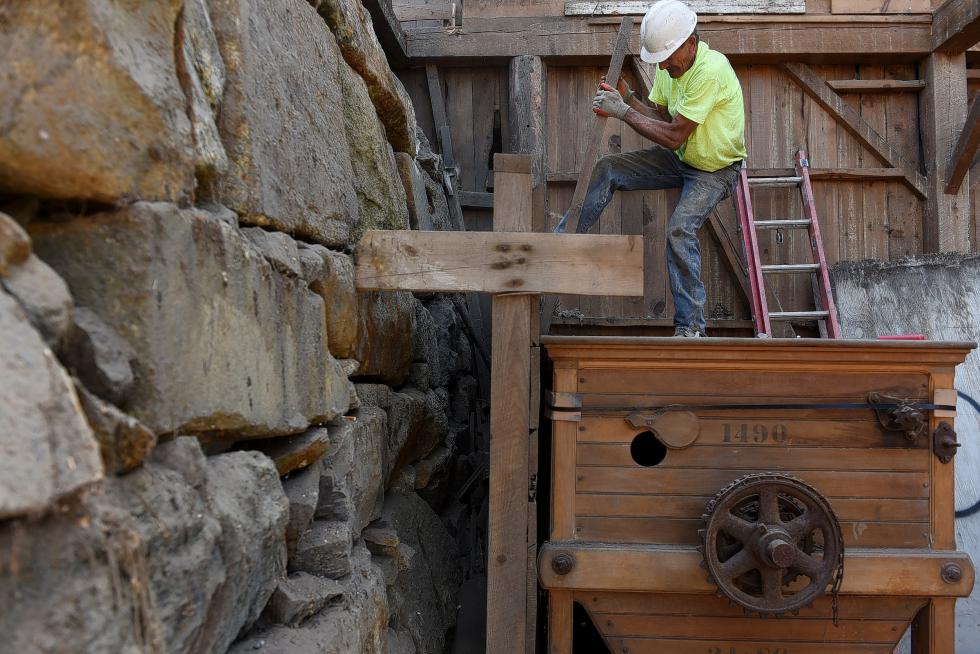 Russell Bishop of Pine Hill Construction separates a 100-year-old grain bolter from a wall in preparation to lift the machine out of the basement in Claremont, N.H., on May 6, 2015. Gerry DeMuro plans to restore the machine and add it to his collection of antiques. (Valley News - Sarah Priestap) <p><i>Copyright © Valley News. May not be reprinted or used online without permission. Send requests to permission@vnews.com.</i></p> 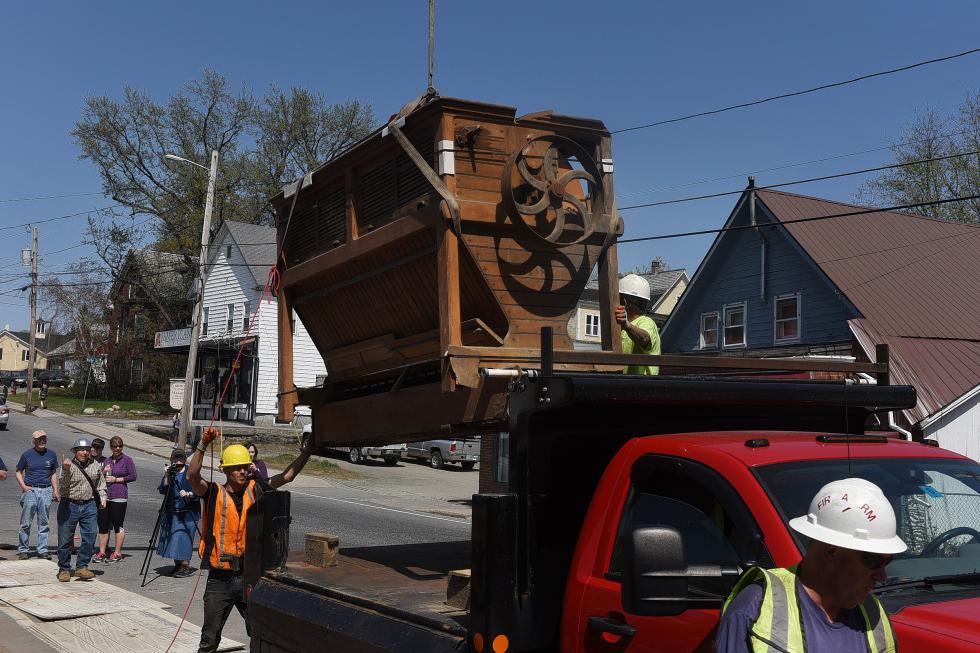 Pine Hill Construction workers gently guide a nearly 800 pound grain bolter onto the back of a truck after lifting it out of the basement of a condemned mill building on Pleasant Street in Claremont, N.H., on May 6, 2015. Gerry DeMuro, who bought the century-old piece of machinery, hopes to restore it to its former glory. (Valley News - Sarah Priestap) <p><i>Copyright © Valley News. May not be reprinted or used online without permission. Send requests to permission@vnews.com.</i></p>

Claremont — Long before it was an eyesore and safety hazard, the abandoned four-story wooden structure with a cupola on top at 157 Pleasant St. was a sophisticated mechanized grain mill operation at a time when farms and railroads were dominant parts of the state’s economy.

Built in 1904 by D. Whiting and Sons, the mill is thought to be the first in the area to rely solely on electricity to process corn, wheat, oats and barley for shipment.

“In 1904, this was state of the art for agriculture and engineering,” said Gerry DeMuro, of Northern Heritage Mills, who, with the help of Pine Hill Construction, salvaged some of the equipment used in the mill when the post-and-beam structure was dismantled recently. “It is a fascinating story of engineering. This industrial economic growth could not have occurred were it not for buildings like this. I think this was the largest grain mill within 20 miles. This mill put many of the small water-powered grist mills still trying to hang on by selling and grinding feed grain instead of flour out of business.”

DeMuro said the grain from the Midwest came through the Claremont Junction and along a spur line to a siding past the current location of LaValley Building Supply. It was dumped out of the boxcars into a huge hopper in the basement and from there, small “elevators” carried it up to the cupola, DeMuro said.

The elevators were wooden square boxes with small, rectangular steel cups inside attached to a canvas or leather belt, later a chain. The cups would scoop up the grain and carry it up to the cupola, where it was dropped into long funnels and deposited into 20-foot high silos on the next floor.

“We calculated there were probably 40 boxcars of grain in the silos when they were full,” DeMuro said.

From there, the processing began through steel grinders, corn crackers and bolters (used mainly to sift flour). There was also mixing of grains.

“Primarily, this was for animal feed. That is my sense,” DeMuro said, noting also that the sifted flour was probably sold to bakers.

When finished, the grain was put into barrels or bags and shipped by rail.

During the demolition, workers discovered numerous records of the business that DeMuro said he has only begun to read through.

“Please send a barrel of flour,” reads one note. “The records probably tell an incredible story,” DeMuro said. “There is a whole list of values and quality of food they could process. They maybe did 100 barrels a day.” Records indicate some shipments went as far as Franklin, N.H.

The machines found in the building were built in the late 1800s, and at least two were made in Exeter, N.H.

One of the last pieces to be salvaged was a bolter, lifted by crane out of the basement after the flooring was removed. It has a horizontal cylinder of fine mesh that spun around to screen the flour, which next dropped into an Archimedes screw, similar to an augur, and was pushed along the base of the bolter and into barrels or bags for shipment, DeMuro believes.

It was not just the engineering aspect of the bolter that DeMuro finds fascinating, but also its cabinetry of rock maple, mahogany and pine.

“It has been sitting in the basement for years but the joints are still tight,” he noted. “There really was a lot of thought to art and design that went into these, as well as engineering.” DeMuro said the Pleasant Street location chosen by Whiting was not random. It provided direct access to two critical things that made the operation so successful: the rail line and electricity.

In his research, DeMuro said, the mill was built just 25 feet from the electric trolley line on Pleasant Street, which was serviced by the power station on Lafayette Street next to the Sugar River.

Local historian Colin Sanborn researched ownership of the mill. David Whiting established his company in 1857 for the sale of milk and dairy products to the Boston area. He later expanded into grist and feed mills and lumber as the network of railroads in New England grew.

Whiting and Sons sold the Pleasant Street operation to Alexander Szyman, who owned it from 1931 to 1936. Successive owners were Britton Grain Co., Delaware Grain Co. feed store, and finally Merrimack Farmers Exchange, which owned it from 1946 until it shut down in 1980 after an embezzlement scheme was uncovered, according to DeMuro. At some point — DeMuro is not sure when — the milling stopped and the business operated more like a warehouse. Sun Ray Pools had a store there from 1985 to 1992 and the building had been vacant since 1993.

Sanborn said a fire insurance maps between 1904 and 1925 note a steel grinder, roller mill, and corn cracker in the building.

Though the building is now gone, one other engineering marvel on the site remains: a box culvert measuring about 15 feet high and 30 feet across constructed of large rocks. It rises up to just below the road and served as one side of the building’s foundation. A small creek runs under the road, and on the stone just above where the water exits the culvert, the rock is stamped with the date: 1893.

DeMuro, of South Acworth, N.H., started Northern Heritage Mills in 2001 as a nonprofit in Claremont with the hopes of preserving historical technologies and using them for educational purposes. The machines pulled from the Whiting Mill represent how Claremont was the center of agricultural engineering and industry. DeMuro hopes to clean up at least one of the machines and make it operational again for demonstration purposes.

“This is a terrific find for Claremont,” he said, with gratitude to Mike Lemeiux, owner of Pine Hill, who recognized the building’s historical value and agreed carefully deconstruct it and save the equipment.

“It should serve as an inspiration and incentive for kids to look at things differently.”