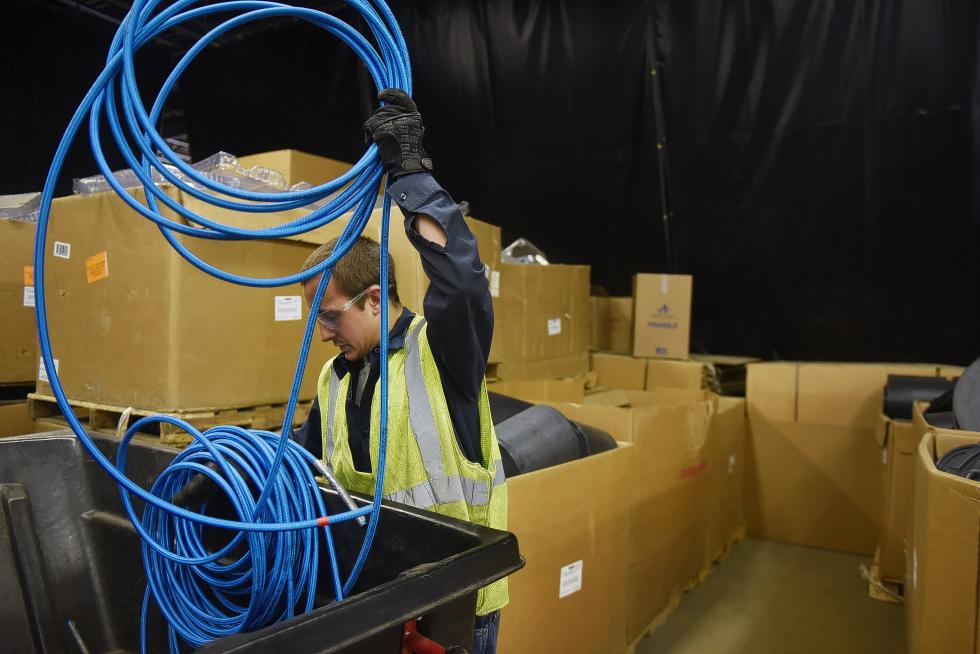 Alex Poisson, recycling driver for Casella Waste Systems, organizes a length of nylon-coated rubber hose at the sorting facility in Lebanon, N.H., on May 22, 2015. Poisson said that while products like the nylon hoses that come from Hypertherm cannot be conventionally recycled at the moment, Casella workers are storing products while they come up with creative recycling solutions. (Valley News - Sarah Priestap) <p><i>Copyright © Valley News. May not be reprinted or used online without permission. Send requests to permission@vnews.com.</i></p> 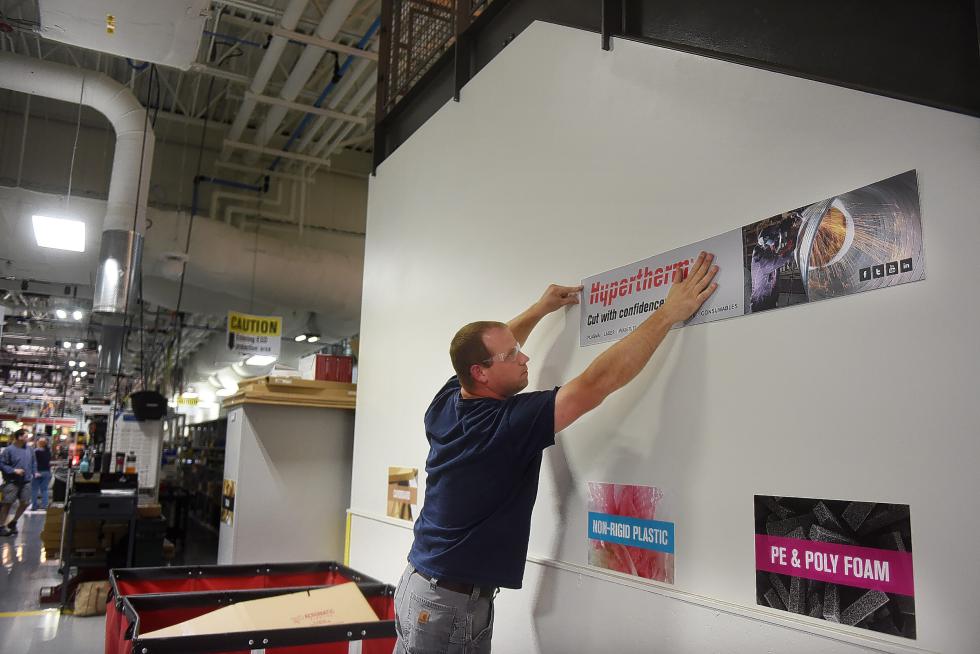 Tyson Mansfield, a material handler, organizes a new recycling area at Hypertherm's Heater Road facility in Lebanon, N.H., on May 22, 2015. (Valley News - Sarah Priestap) <p><i>Copyright © Valley News. May not be reprinted or used online without permission. Send requests to permission@vnews.com.</i></p> 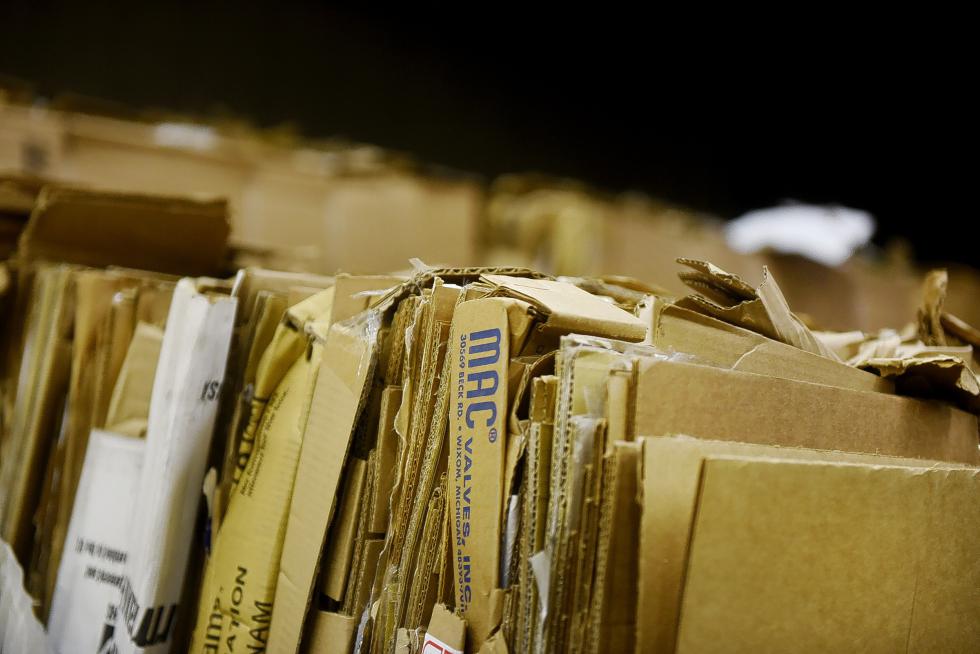 A compressed cube of cardboard waits to be transported to a recycling facility at a sorting facility managed by Casella Waste Systems in Lebanon, N.H., on May 22, 2015. (Valley News - Sarah Priestap) <p><i>Copyright © Valley News. May not be reprinted or used online without permission. Send requests to permission@vnews.com.</i></p>

Lebanon — Hypertherm wants to throw out the idea of garbage. All of it.

The Hanover-based maker of industrial cutting equipment, which has a 160,000-square-foot manufacturing facility in Lebanon, has teamed up with Rutland-based Casella Waste Systems to implement a recycling partnership. Casella is seeking to enlist other area businesses and institutions into the pilot program.

The program, which has been underway since January, is designed to reduce the amount of waste headed to landfills by finding a buyer for the jettisoned materials — typically corrugated paper from cardboard packing boxes and various grades of industrial plastic — in the recycle market.

As part of the program, Hypertherm is allowing Cassella to use one of its unused warehouses on Etna Road in Lebanon as a collection, bundling and storage facility for the recyclable materials before they are transported to paper mills or processing plants where the plastic is ground into pellets.

But the bigger goal is to persuade other businesses and institutions both within the Upper Valley and beyond to join the program so that it can “scale up” and have recyclable materials in large enough quantities to entice recycling mills and processors to bid on the product.

“We’re thinking of it like a waste cooperative,” said Jenny Levy, vice president of corporate social responsibility at Hypertherm. “If you want to participate in the recycling markets you got to have volume.”

Casella has installed an on-site team at Hypertherm from its Casella Solutions division that is responsible for collecting the pre-sorted recyclable materials in bins scattered among 11 different company buildings. The bins of recyclables — plastic reels for coiled hosing, plastic trays, plastic bubble wrap, cardboard boxes and packaging materials, plastic safety goggles — are trucked to the warehouse on Etna Road and logged into a computer system for tracking purposes. The materials are then dumped into compactors that bundle the collection into bails weighing between 650-1,300 pounds and stored at the warehouse until there is enough to fill a 40,000-pound load on a trailer. The trailer later hauls the load to either a paper mill or plastics recycling processor.

Previously, a portion of the waste collected by Casella at Hypertherm would have simply been hauled to a landfill, said Matt Albertazzi, a business development executive with Casella Solutions who oversees the pilot program and is tasked with enlisting other companies and institutions. “Hypertherm said, ‘If we give you the space, utilize our building, take our recycling stream and find others to match it, maybe we can get the volume,’ ” Albertazzi said.

Unlike traditional waste hauler arrangements with companies that involve the hauler carting away bins of refuse from “behind the back door,” Albertazzi said, Casella spent several months studying Hyperthem’s waste stream on the factory floor, identifying its sources and types, working with manufacturing teams to develop an extraction system that would allow a Casella worker to retrieve the bins from the floor and transport them to the warehouse.

Albertazzi declined to identify other companies he is in discussions with about joining the program, other than to say that some are as far away as Manchester and Northern Vermont. “We’re exploring a lot of different avenues,” he said.

Levy said the partnership with Casella is part of Hypertherm’s corporate environmental stainability goal to reach “zero waste” going to landfill by 2020. Only six months old — the program began in January — it already appears to be having a positive impact, Levy said.

Excluding metals, 26 percent of the waste that Hyperthem generated in 2014 went to the Lebanon landfill. But so far this year, 14 percent of the waste that Hypertherm generated has gone into the landfill, with the difference diverted into the recycling program, according to the company. Hypertherm has set a goal of 10 percent of its waste going to the landfill by 2016 on the way to shrinking to zero by 2020.

“That is a dramatic drop in our waste,” Levy said. “That’s where we really see the power of this.”

Metals account for most — 2,167 tons last year — of Hypertherm’s waste stream, however, and are recycled separately and not part of the deal with Casella. By comparison, Hypertherm sent 150 tons of waste, or 6 percent of its total, to the landfill.

Neither Casella or Hyperthem would discuss the financial terms of the partnership.

Typically, a company pays a waste hauler for its service. But in the pilot recycling program, the waste company is also brokering and selling the recyclable materials to a processor, which produces revenue.

Paul Ligon, senior vice president of business development and strategy at Casella Solutions, acknowledged that the “value of the commodities does not always offset the cost” — meaning generating enough revenue to net out to zero cost for Hypertherm — but “will probably be a more cost-effective way to handle these materials and (not as costly) as hauling and disposal” at a landfill.

Hypertherm’s Levy, however, said she has toured other factories and businesses, such as the Subaru automotive plant in Lafayette, Ind., that says it earns a profit from its recycling program — although Subaru’s volume of recyclable materials far exceeds what Hypertherm generates.

But whether Hypertherm can even actually achieve “zero” waste remains to be seen. Levy said it may turn out that there are some materials in Hypertherm’s waste stream that just cannot be recycled and the only destination for them will be the landfill.

“We may never be able to get to zero,” she said. “But it’s like zero accidents at work. It’s the same principal that applies here.”