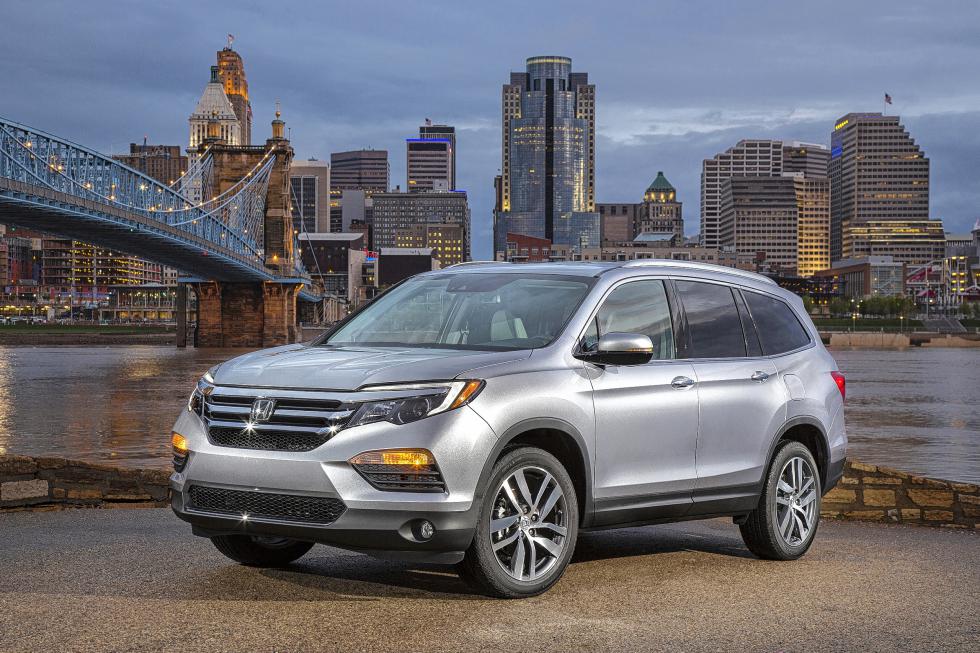 The 2016 Honda Pilot Elite has the conservative, sophisticated elegance that should endear it to longtime buyers. (Honda)

When the Japanese automaker last redesigned the Pilot in 2009, Honda designers gave the three-row crossover the look of a true SUV, with big, boxy proportions. While successful, the model lacked the conservative, sophisticated elegance that buyers had come to expect.

This has been rectified with the release of the 2016 Honda Pilot.

The Pilot is 3.5 inches longer than the previous Pilot, with 1.3 inches of that going to the cargo area. This allows owners to carry an 82-quart cooler without folding the third-row seats. And accessing that third row is easier. Access width has grown by 2.5 inches, and a one-touch second row seat that boasts a button mounted low on the second row seat side bolster, where it’s easy for children to reach.

There are five ascending trim levels, LX, EX, EX-L, Touring and Elite, with the biggest difference being the number of amenities. So most buyers will get a second-row bench seat unless opting for the Elite, in which case there will be captain’s chairs. Both first and second row seats can be heated, while front seat occupants can cool their thrones as well.

Other new interior features include Honda’s first panoramic sunroof, remote start, and a smart key with pushbutton start. There’s also Siri Eyes Free, which allows Apple iPhone users to access Siri by activating a button on the steering wheel, as well as Tire Fill Assist, which honks the horn when you’ve filled a tire to the proper pressure.

The new cabin has a noticeably better grade of materials, with a pleasing design and premium appearance. Front seat room is good and seats are comfortable. Second row passengers have a decent amount of legroom, and the seats are comfortable despite being mounted low in relation to the floor. And the cabin is remarkably quiet. One of the biggest improvements, however, can be found on the instrument panel, even if it’s not without problems.

Honda has abandoned its use of two screens on the center stack, opting to follow the industry on using one screen. In this case, it’s an eight-inch touchscreen powered by an Android operating system. Unfortunately, Honda uses the touchscreen for many audio functions, including those that are better handled by a simple knob. Also, the screen is used for Honda’s Lane Watch system, which uses a camera to show vehicles in the driver’s blind spot, but only on the right side of the vehicle, not the left. And while you might appreciate seeing an image of what’s on the right side, it obliterates anything on the screen, including navigation instructions and audio controls. Obviously, this isn’t an issue on Hondas with two screens. Buyers can avoid this annoyance by opting for the Elite model. It uses a traditional blind spot monitoring system, not Lane Watch.

All Pilots come with the same engine: a new direct-injected 3.5-liter, V6 rated at 280 horsepower and 262 pound-feet of torque. That’s an increase of 30 horsepower and 9 pound-feet over the previous model. Power is delivered through one of to new transmissions. LX, EX and EX-L models get a six-speed automatic transmission, while Touring and Elite models get a nine-speed automatic. The new engine uses cylinder deactivation to shut off three cylinders under light loads. This allows for a one-mpg increase in fuel economy for six-speed models, and a two-mpg increase on nine-speed models.

Pilot buyers can opt for all-wheel-drive, which now includes dynamic torque vectoring, which funnels the power side-to-side, as well as front to back to improve handling and traction. In addition, a new Intelligent Traction Management allows the driver to choose among Normal, Snow, Mud and Sand modes on all-wheel-drive models; or Normal and Snow modes on front-wheel-drive models.

While you’d ever mistake the Pilot for anything remotely sporting, the new model is pleasingly responsive to drive, with precise steering that makes piloting the Pilot a fuss-free endeavor. That said, its ride seemed soft at times, exhibiting subtle body motions that came as a surprise being a Honda. Given the Pilot’s demographic, buyers won’t be concerned. Just as the Accord anchors the top of Honda’s sedan line, the automaker is looking for the Pilot to anchor the top of its SUV line, which includes the smaller CR-V and new subcompact HR-V.

In many ways, this new Pilot updates the product so that it now matches the features offered by many of its competitors. The new model is so improved, and so much better, there’s little doubt that Honda will soon have a waiting list for the 2016 Pilot when it arrives in showrooms.