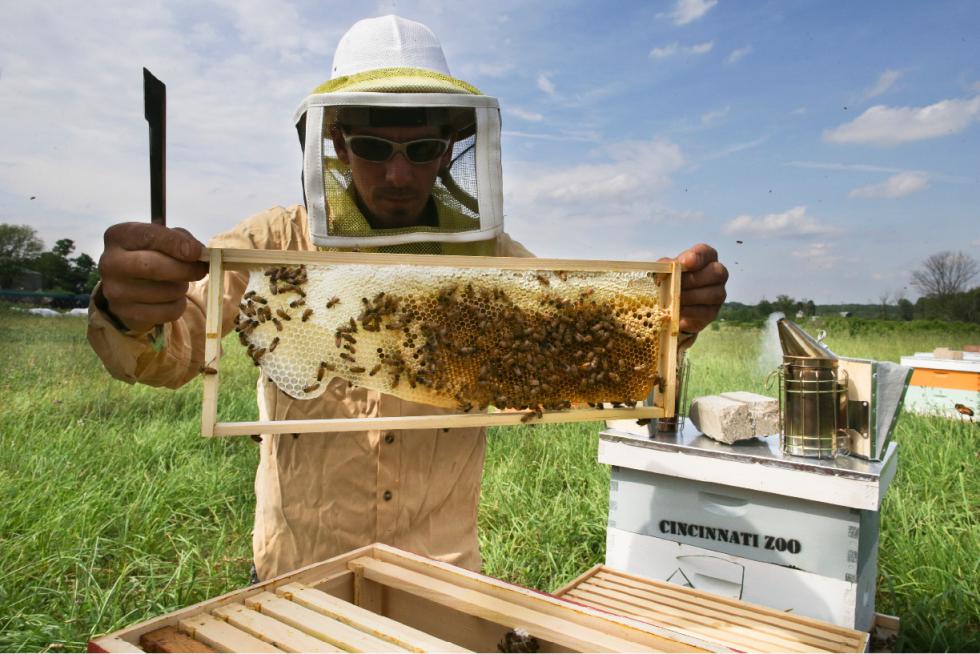 Volunteer Adam Martinez, a horticulturalist with the Cincinnati Zoo, checks honey bee hives for queen activity and performs routine maintenance as part of a collaboration between the zoo and TwoHoneys Bee Co., Wednesday, May 27, 2015, at EcOhio Farm in Mason, Ohio. A federal rule to be proposed Thursday, May 28, would create temporary pesticide-free zones when certain plants are in bloom around bees that are trucked from farm to farm by professional beekeepers, which are the majority of honeybees in the U.S. (AP Photo/John Minchillo)

Washington — If honeybees are busy pollinating large, blooming croplands, farmers who want to spray toxic pesticides will soon have to buzz off, the Environmental Protection Agency is proposing.

A federal rule proposed last week would create temporary pesticide-free zones when certain plants are in bloom around bees that are trucked from farm to farm by professional beekeepers, which are the majority of honeybees in the U.S. The pesticide halt would happen only during the time the flower is in bloom and the bees are there, and only on the property where the bees are working, not neighboring land.

The idea is “to create greater space between chemicals that are toxic to bees and the bees,” Jones told The Associated Press.

This is part of a new multi-part push by the Obama administration to try to reverse dramatic declines in bee populations. A new federal survey found beekeepers lost more than 40 percent of their colonies last year, although they later recovered by dividing surviving hives.

Scientists blame many factors for bee declines: pesticides, parasites, pathogens and poor bee nutrition because of a lack of wild plants that bees use as food. The new rule deals only with the pesticide part; two weeks ago, the federal government came up with a plan to create more and varied food for bees on federal land.

The new rule “doesn’t eliminate (pesticide) exposure to honeybees, but it should reduce it,” said University of Illinois entomologist May Berenbaum. “It may not be ideal, but it’s the best news in about 120 years. In concept, in principle, this is a big policy change.”

The EPA proposal doesn’t apply to residential pesticide use, nor home beekeeping. This is just for areas where professional beekeepers haul in their hives. These trucked-around hives now account for about 90 percent of honeybees in the U.S., according to the University of Maryland’s Dennis van Englesdorp.

This method of managed hives is the insect equivalent of handling livestock and is “a fairly intensive process,” said Pennsylvania State University professor Diana Cox-Foster. “I think it’s much more work than raising cows.”

Jones estimates that at least 2 million or 2.5 million acres of cropland will be affected by the new rule. It only applies to spraying pesticides on leaves, not seed or ground applications.

“The acreage may not be large, but the impact is,” Jones said. “It’s really a function of where the bees are.” So when bees are pollinating almonds in February and March, the temporary bans would be near almond trees. They would apply near apple trees in April and May and melons in late spring, he said.

The rule is focused on the time when scientists can document the highest risk for bees, Jones said.

The proposal needs public comment, then will be finalized. If all goes according to plan, new rules and new pesticide labels will be ready for spring 2016, Jones said.