Fuel and Fires Ahead for the U.S. Economy

Home » Upper Valley Business News » Fuel and Fires Ahead for the U.S. Economy 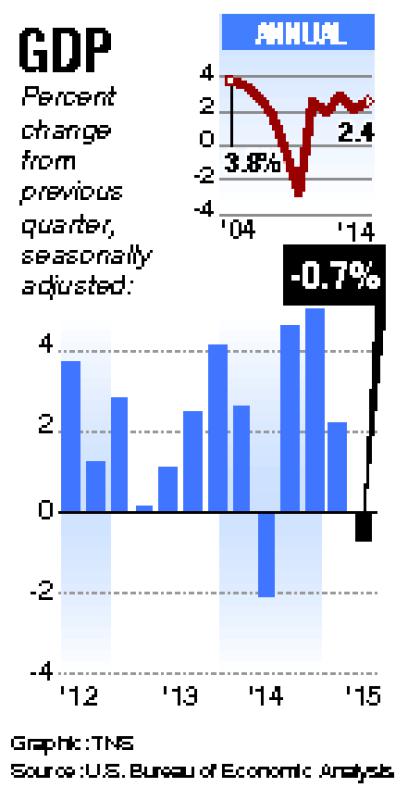 <b>EDITORS: This graphic is optimized for use full-screen vertical on an iPhone. It may, of course, be used on other digital products and in print publications.</b> Chart showing trend in U.S. GDP (gross domestic product). TNS 2015<p>

Washington — The U.S. economy shrank at the start of the year, but the road ahead looks brighter.

Just how much brighter is what’s up for debate.

Steady hiring and low gas prices should help power solid growth through the rest of 2015. The harsh winter and a labor dispute that slowed trade at West Coast ports are both over. Home sales and construction are rebounding, along with business investment.

But risks remain: A stronger dollar will likely continue to keep the trade deficit wide. And further cutbacks in oil drilling could depress spending in the energy industry.

While the overall economy went into reverse, the labor market has been steaming ahead. The U.S. added 223,000 jobs last month, and the unemployment rate dropped to 5.4 percent — the lowest level since the fall of 2008.

Theoretically, more people working means more income to spend. Economists are forecasting that the modest 1.8 percent growth in consumer spending in the first quarter will climb. And since consumer spending accounts for 70 percent of overall activity, the acceleration will lift economic growth back into positive territory.

Economists believe a lot of the bad things that happened in the first quarter are fleeting.

The Northeast has emerged from the frigid cold and record amounts of snow that hit the region in the first quarter. The winter blizzards that curtailed trips to the mall and auto dealerships could even lead to a surge in pent-up demand in coming months.

A labor dispute that disrupted shipping at many West Coast ports has been resolved, which should alleviate supply bottlenecks that depressed manufacturing activity.

Economists also believe they are seeing signs that business investment is starting to rise after falling for a number of months. Gains in housing construction and sales are also fueling hopes.

That has raised questions about whether the government is having trouble seasonally adjusting activity in the winter and is over-stating first quarter weakness. The Bureau of Economic Analysis, which prepares the GDP, has agreed to look into the issue and says it may adjust the figures later this year.

Any gains would make the start of this year look better and mean the economy had less of a hole to climb out of going forward.

A bigger-than-expected trade deficit was a key reason that the GDP was revised from a tiny 0.2 percent gain to the 0.7 percent decline.

The widening deficit is a reflection of the dollar’s increase in value against other major currencies since last year. The stronger dollar hurts U.S. exports by making American-made goods more expensive in overseas markets. It also increases the competition domestic producers face from foreign-made goods by making imports cheaper for American consumers.

It was a surge in imports that played the biggest role in widening the trade deficit in the first quarter. Economists believe the drag from the trade deficit will ease in coming months. But if they are wrong, that could mean their forecasts of a rebound will turn out to be overly optimistic.

The big drop in oil prices since last year was supposed to be a net positive for the U.S. economy. But so far, the economy has felt more pain than gain.

Energy companies have slashed their spending on drilling activity, pushing it down by 48.6 percent in the first quarter — the sharpest fall since the depths of the 2007-2009 recession. While drilling rig counts are still dropping, economists hope that the drag from these cutbacks will begin to lessen.

Analysts are also hopeful that the gains they have been forecasting in consumer spending will start to emerge. They have been puzzled that consumers so far have chosen to bank their savings from lower gas bills rather than spend the money.

While gas prices have risen recently, they are still about $1 below the levels of a year ago. Economists believe these continued savings will spur stronger consumer spending in the months ahead. If they are wrong, then the expected growth in consumer spending may be modest.

The economy has muddled through with sub-par growth averaging just 2.2 percent since the recession ended in June 2009. Economists have repeatedly forecast that the economy was on the verge of breaking out to faster growth above 3 percent, only to be disappointed.

When this year started, they were predicted 2015 would be the strongest in a decade, topping the 3.3 percent growth of 2005. However, with the surprisingly weak start to the year, they have scaled back those estimates.

There could be more unwelcome surprises. One of the biggest could be volatility in financial markets once the Federal Reserve starts raising interest rates. It has kept a key rate near zero since late 2008.

At the moment, rate hikes are expected to begin in September. While the central bank has done a lot to prepare markets, there could be a possible repeat of the 2013 “taper tantrum,” which sent markets tumbling for a time. Turbulent markets might then undermine consumer and business confidence and push growth lower.