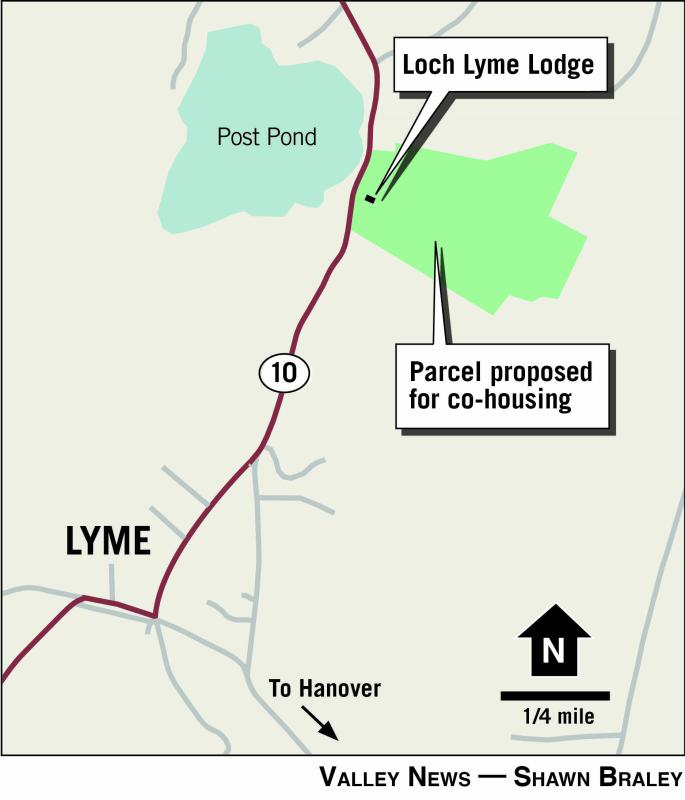 Lyme — The owners of the Loch Lyme Lodge on Orford Road are awaiting a decision from the town zoning board as to whether they may develop a 36-unit co-housing project near the resort overlooking Post Pond.

After years of planning and negotiations with the town, the Zoning Board of Adjustment may rule on Wednesday on whether to grant a variance to the developers, the Pinnacle Project, allowing them to build on roughly four of the 98 acres in their lot abutting the pond. Meanwhile, Lyme residents, particularly those living across the water, have organized in opposition, saying the waterfront development would disrupt the rural character of the area and harm property values.

Co-housing, the proposed format of the Loch Lyme project, is an arrangement that allows residents of a future development to participate in the planning process of their neighborhood, which includes common facilities that they co-own.

Developer Liz Ryan Cole, a Vermont Law School professor who lives in Thetford, said the proposal would provide a needed diversity of housing stock and would be affordable for young workers and their families.

“It’s very hard for people to buy a home there now,” she said in an interview on Sunday, “and so the benefit would be people who are teachers and other people who aren’t (earning high incomes) can afford to live there.”

In the coming year, the developers plan to build between 12 and 20 homes on the plot, adding units thereafter to reach a total of 36. The prices would likely range from $200,000 for a one-bedroom house to $500,000 for four bedrooms, and co-housing residents would also have access to a shared kitchen, dining room and library, trail network and workshop space.

Opponents of the project, many of whom list addresses on the pond, have engaged the Manchester law firm Bernstein Shur to argue their case before the zoning board.

“I think it would be bad for the Post Pond neighborhood,” said Tom Morrissey, of Post Pond Lane. “We have valid concerns about light, noise, traffic, boat traffic, increased density, decreased privacy and the effect of such a development on property values. ”

Morrissey and other opponents also questioned the precedent the town would set by allowing the developers a variance.

In doing so, said neighbor John Quimby, who is a party to the Bernstein Shur contingent, “they would open the door for many other projects of the same scale in Lyme that would not have the same concern for green energy and co-housing construction and social consciousness” and empower other developers who “may not be so ethical.”

Quimby called the Post Pond development an “essentially well-intentioned project that would have some rather unfortunate consequences for the rest of the town.”

For her part, Cole cast the town’s rules and the objections of her project’s detractors as efforts to exclude certain segments of the population.

“Can a town really say, ‘We’re closing the doors; no one can live here unless they can afford to buy expensive property?’ ” she said.

The Pinnacle Project is a 15-member corporation that owns controlling shares in Loch Lyme Lodge Inc., which owns the land and the buildings.

The development group has been working to obtain town permits since it purchased the stock in 2006. It made three attempts to change Lyme’s zoning ordinance to allow the project — in 2010, 2011 and 2013 — two of which residents voted down at Town Meeting. The other was withdrawn.

If the Zoning Board of Adjustment denies the variance application, the developers’ options would likely include subdividing the property, selling it to potential home builders and closing the lodge, according to Cole.

“If this project didn’t go through, then I think the lodge wouldn’t stay open,” Cole said. “This is not a moneymaking business. A fireplace is the only source of heat. It’s a 100-year-old cabin-based resort — no TV, no hot tubs — and we love it.”

Pinnacle member Rich Brown, of Hanover, said his group could appeal a Zoning Board of Adjustment decision, though he said the measure would go before the same board. The next venue would be the New Hampshire Superior Court system.

In one of many submissions to the board, the developers included a study from their consultant, the Arnett Development Group , contending the town’s current housing policies may be in violation of state statute relating to “workforce housing.” Under New Hampshire law, municipalities must make available a “reasonable opportunity” to build a certain amount of workforce housing, or housing stock affordable for a household earning the county’s median income .

Of 36 total units, the developers’ plans call for four units of workforce housing.

Hinting at a potential avenue for legal appeal, Pinnacle Project cited a number of court cases where other developers sued municipalities over workforce housing statute and succeeded in reversing zoning decisions.

David Robbins, the town’s planning and zoning administrator, said last week that the town was in compliance, noting that the law does not mandate that such housing units currently exist; rather, it keeps open the possibility of building them.

Morrissey argued that, as precedent, the cases were not favorable to the Loch Lyme project because they included much higher ratios of workforce housing to other types — in two of those instances, all units were workforce housing.

The Lyme Zoning Board of Adjustment is scheduled to meet Wednesday at 7:30 p.m.