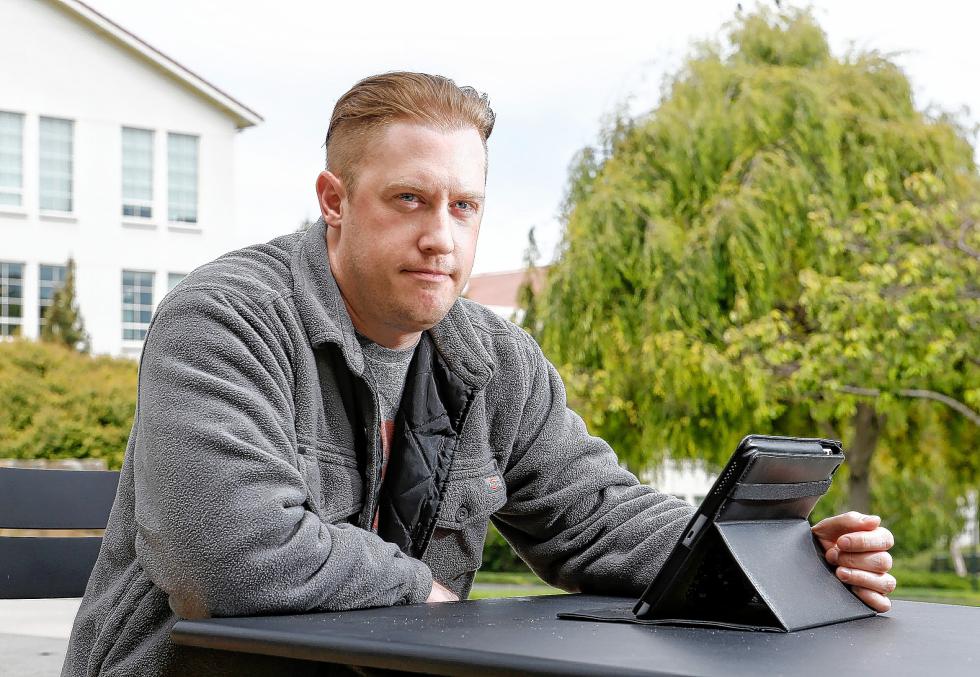 Tim Odell poses for a portrait with Pinterest postings on his tablet in San Francisco, Calif., on Tuesday, May 19, 2015. (Gary Reyes/Bay Area News Group/TNS)

He isn’t the typical user of the photo-collecting site.

Nationwide, about 71 percent of Pinterest’s 76.6 million unique visitors in April were women, data from the Internet analytics company comScore showed. But Pinterest has been beefing up efforts this year to attract more men to the site, as it starts selling ads for the first time.

“Big brands want to reach a large number of the population,” said Andrew Lipsman, comScore’s vice president of marketing and insights. “If you’re not reaching a mainstream audience across both segments of the population and both gender groups, that might limit the type of brands that are going to use your platform.”

Other popular social media companies such as Facebook and Twitter that make most of their money through selling ads have more of an even split between male and female users. Pinterest began drawing women right from its start, and early users were not only female but middle-age and from the Midwest. That may have stemmed from how the site was perceived.

“The early theory was that it was the digital version of scrapbooking,” Lipsman said. “That’s something that tends to skew female.”

Still, as more people browse through Pinterest to organize and share images so they can plan their dream wedding, remodel their homes, try a new recipe and more, the San Francisco-based startup valued at $11 billion could become an advertising powerhouse, analysts say.

The website allows users to bookmark or “pin” an image to a “board,” allowing people to save their collection of photos in different categories, search for more images and follow other people with similar interests. Clicking on an image easily directs users back to the original source. There are more than 50 billion pins — visual bookmarks — saved by people on more than 1 billion boards, according to Pinterest.

To make its website more male friendly, Pinterest this year started filtering search results on its website by gender so men could avoid seeing, for example, a stream of female footwear when they searched for shoes. On the flip side, women can also steer clear of results for men, avoiding a flood of male-oriented watches if they’re on the hunt for a timepiece.

Odell, who lives in the Bay Area, joined Pinterest last summer after he stumbled upon the website for the first time while searching for online images of medieval armor, which he wants to recreate to look as historically authentic as possible from each buckle to hinge.

“I didn’t know what it was, but I found these images I couldn’t find anywhere else that people collected,” said Odell, who works as a texture artist and 3-D modeler at the visual effects company Industrial Light & Magic in San Francisco.

The 39-year-old then turned to his wife to learn more about the site. Now from time to time, he spreads the word about Pinterest to his guy friends.

“They don’t realize there’s a lot of source material,” he said. “They see women posting in it and that’s what they talk about.”

Though comScore data showed that the percentage of U.S. men on Pinterest didn’t budge much in April compared to the same month last year, the number of men on the website increased along with the amount of time they spent there.

In April, male Pinterest visitors in the United States spent a total of 1.76 billion minutes on the website, from 359 million minutes compared with the same month last year.

Pinterest, which declined to disclose its user numbers and split by gender, said that men are its fastest growing group of users and now make up a third of all signups. The company said that it doubled the number of male users worldwide in 2014 and the number of men signing up grew 86 percent in May compared to last year.

In India, Korea and Japan, there’s an even split among men and women who use the website.

Erna Alfred Liousas, an analyst at Forrester Research who covers businesses that market to consumers, said that when Pinterest started to gain steam and people began to realize the majority of the site’s users were women, that “wasn’t exactly a calling card for men.”

“Something is not resonating with men and it’s probably more than content,” she said.

Alfred Liousas said the site might be too pretty for men.

“The aesthetics of the site, while beautiful, might not strike the same chord with the male population,” she said.

Youth pastor Beau Coffron posts photos of creative lunches shaped as Kermit the Frog, Charlie Brown and Kung Fu Panda on a blog called lunchboxdad and heard about Pinterest from friends about two years ago. It never crossed his mind when he joined to promote his blog that there would be a large number of women on the site, though he quickly realized that was true.

“I think (the perception) is starting to change,” he said. “More and more guys are taking a serious look at it.”

But Pinterest is still a long way from striking a gender balance.