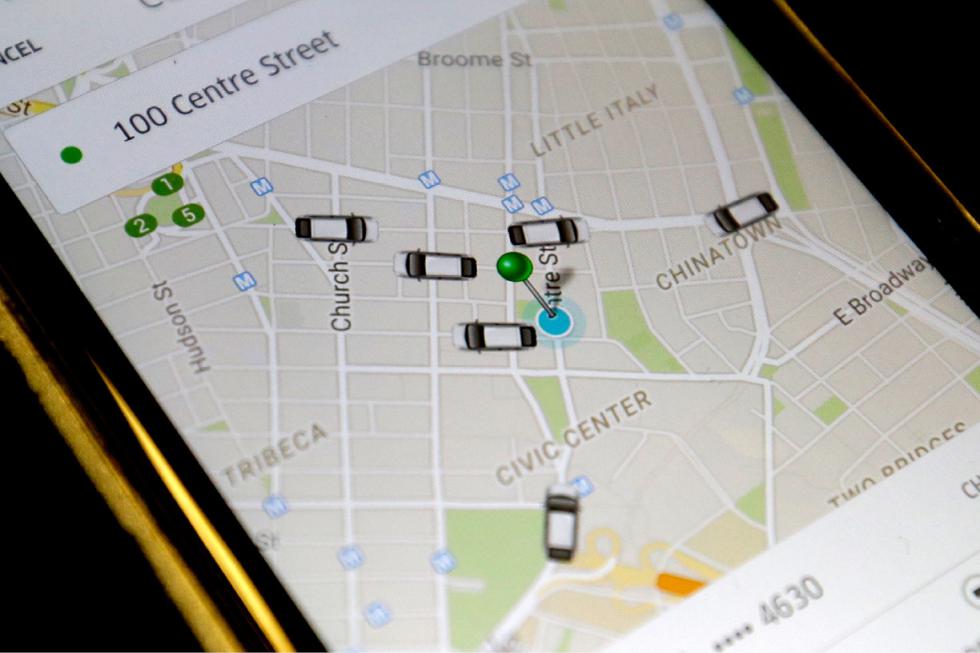 FILE - In this Wednesday, March 18, 2015, file photo, the Uber app displays cars available to make a pickup in downtown Manhattan on a smart phone, in New York. A new report by expense management system provider Certify shows that 47 percent of the ground transportation rides by its users in March were through Uber. (AP Photo/Mary Altaffer, File)

The Uber business model is pretty simple: People use the ride-hailing app to find a driver to take them where they want to go for a price.

But is that driver an Uber employee or an independent contractor?

Now, the California Labor Commissioner’s office has ruled that San Francisco Uber driver Barbara Ann Berwick was an employee — and entitled to receive more than $4,000 in mileage and toll expenses because her services were “integral” to the company’s business model.

Without drivers, Uber’s business “would not exist,” the order concluded.

The decision — handed down earlier this month and appealed on Tuesday by Uber — could disrupt the Silicon Valley startups that have redefined the relationship between companies and workers. The case could spawn other legal challenges from workers and regulations from cities and states.

If the case winds up before the California Supreme Court, it could lead to a broader, precedent-setting ruling.

Uber connects drivers and passengers through a smartphone app, much in the same way that Airbnb digitally connects property owners and short-term renters. Both companies, and others like them, have faced a series of political battles in states and cities struggling to regulate such fast-growing enterprises, which are upending business models — and often drawing protests.

Uber has grown more than sixfold over the last five years — it now operates in more than 150 U.S. cities and 57 countries around the world. The company has raised more than $5.9 billion from investors, putting Uber at a $41 billion valuation, above General Motors and Ford, and the highest-valued startup in the U.S.

Those high valuations, however, could be threatened by a rising tide of legal and regulatory challenges across the globe. Taxi companies have argued that such “ride-sharing” services should face much stricter regulations, and Uber’s labor practices have come under increasing scrutiny.

In March, a federal judge gave the go-ahead to a class-action lawsuit in federal court in San Francisco involving drivers who argue that they are employees entitled to benefits such as unemployment insurance, workers’ compensation and healthcare.

“This could potentially be a big blow to the company, in terms of how it envisions its business model,” Koslowski said.

But he said Uber could potentially find a compromise that would allow drivers who work a certain number of hours, for example, to be classified as employees, but leave others working as part-time contractors.

“Uber will continue to explore options to reduce the cost factors of a human driver,” Koslowski said, adding that the company has already expressed interest in driverless cars.

Uber has contended that it offers its drivers the freedom to choose how often and when to work, meaning the traditional employer-employee relationship does not apply.

“It’s important to remember that the No. 1 reason drivers choose to use Uber is because they have complete flexibility and control,” the company said in a statement Wednesday responding to the Labor Commissioner’s ruling. The company also said the decision contradicted a 2012 ruling in which the office concluded that a driver had performed services as a contractor and “not as a bona-fide employee.”

The most recent order found that Uber was involved in “every aspect of the operation,” including vetting drivers, requiring them to provide personal banking, Social Security and address information, conducting DMV and background checks, and only allowing drivers to use registered cars that are less than 10 years old.

Uber requires drivers to pay expenses. Unlike many taxi or limousine services, Uber doesn’t directly employ drivers, nor does it own or maintain the vehicles used by the drivers.

Classifying drivers as employees would be costly for Uber. In California, for example, the company would have to reimburse employees for gas, tolls and insurance and would also be on the hook for unemployment insurance, workers’ compensation, Social Security and other benefits.

Berwick said she worked for Uber from July to September last year. She represented herself during the proceedings, she said, but was considering hiring an attorney for the appeal.

“I think for them to appeal is silly,” she said, declining further comment.

The classification of “independent contractor” versus “employee” has been a long-standing source of conflict in U.S. labor law, ranging from port truck drivers to janitors to delivery drivers.

But in recent years, the debate has shifted into the high-tech startup realm, where companies have worked to develop applications connecting workers who supply services and customers who demand them.

Workers’ advocates argue that technological innovation shouldn’t change the basic contract between an employer and its workers.

“It’s just a new manifestation of an old problem,” said Caroline Fredrickson, president of the American Constitution Society, a progressive legal policy group in Washington. “People tend to see it as an app or a software application, but in fact there are people who are doing jobs behind it.”