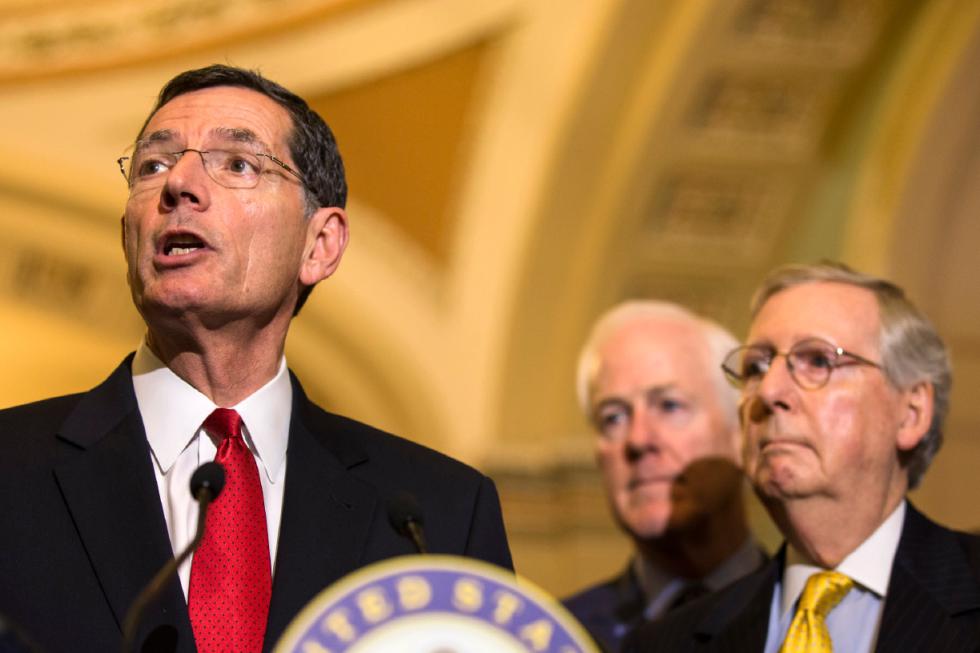 FILE - In this May 5, 2015 file photo, Sen. John Barrasso, R-Wyo., left, accompanied by Senate Majority Whip John Cornyn of Texas, center, and Senate Majority Leader Mitch McConnell of Ky. speaks during a news conference on Capitol Hill in Washington. Senate Republicans discussed a proposal Wednesday to temporarily help millions of people who could lose federal health care subsidies should the Supreme Court annul the aid, which has been a pillar of President Barack Obamas health care law. (AP Photo/Brett Carlsen)

Washington — The House defied a White House veto threat and voted Thursday to abolish a tax on medical device makers as a group of Democrats uncharacteristically joined Republicans in moving to kill part of President Obama’s health care law.

Thursday’s 280-140 House vote was exactly the two-thirds margin that supporters would need to override a presidential veto. The real suspense will come in the Senate, which voted overwhelmingly to repeal the levy in 2013, but in a nonbinding roll call lacking the political pressures of a veto showdown.

The Republican-led House has voted more than 50 times since 2011 to void all or part of Obama’s health care overhaul, usually along party lines. On Thursday, Republicans were joined by 46 Democrats from states where medical devices are made to erase the 2.3 percent tax.

The vote came as lawmakers prepare for a Supreme Court decision as soon as next week that could remove a more vital piece of the 2010 health care law — federal subsidies that help millions of Americans buy coverage. Eliminating that aid would have a far greater impact on the health law than ending the medical device tax.

The tax on medical devices took effect two years ago and was designed to help pay for the health care overhaul, which has expanded coverage for millions of people. It is imposed on equipment like artificial hearts and X-ray machines, but not items used by individuals like eyeglasses, wheelchairs or blood glucose monitors.

Opponents of the repeal effort say taxes the law imposed on many branches of the health care industry were outweighed by millions of added customers the law has created. They also object that opponents would pay the $24 billion, 10-year cost of repeal with bigger federal deficits.

In its letter threatening a veto, the White House said repeal would “provide a large tax break to profitable corporations” and cut money for “financial assistance that is working to improve coverage and affordability” of health care.

The group, AdvaMed, says the tax eliminated 4,500 jobs last year and a projected 20,500 more jobs over the next five years. It also says the levy is forcing companies to cut research and investments.

“With an aging population and growing incidences of chronic disease, now is the time for more — not less — resources to advance cures and treatments,” Stephen J. Ubl, AdvaMed’s president, said after the vote.

In January, the nonpartisan Congressional Research Service issued an economic analysis saying the levy’s impact on companies “will likely be minimal because the tax is expected to be passed on in price and the decrease in demand would be negligible.”

The service, which studies issues for Congress, projected that the tax would likely cause job losses ranging from nearly zero to 1,200 jobs.

A day after top House Republicans briefed GOP lawmakers on tentative plans should the Supreme Court void many of the health law’s subsidies, House Speaker John Boehner defended the proposal.

“Our goal is to provide peace of mind to families who have coverage disrupted through no fault of their own,” said Boehner, R-Ohio. He said Republicans “will focus on protecting the American people — offering new choices for quality, affordable health care — not protecting this failed law.”