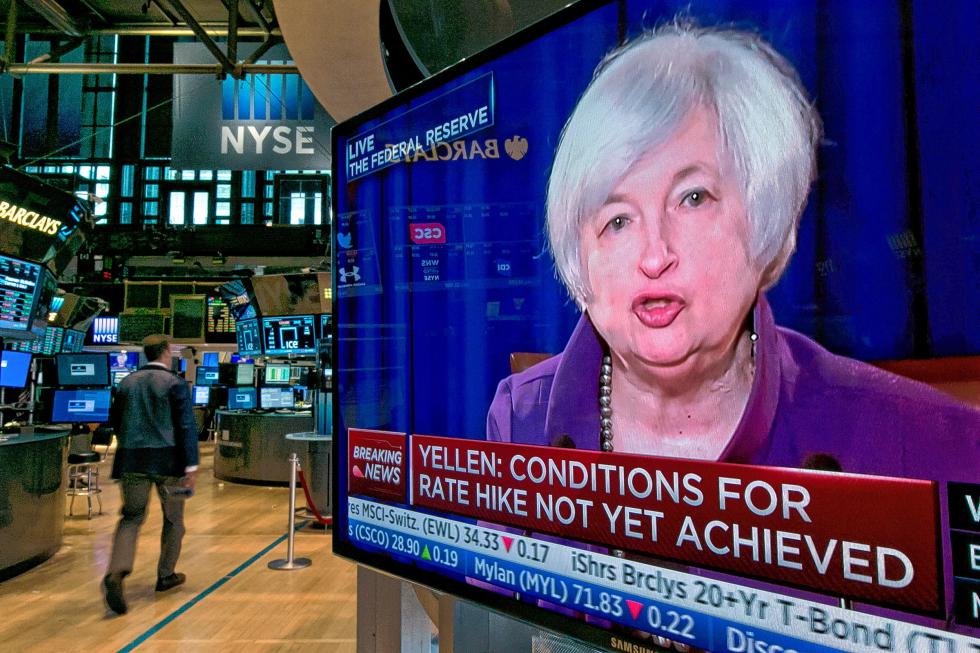 The press conference of Federal Reserve Chairperson Janet Yellen appears on a television screen on the floor of the New York Stock Exchange, Wednesday, June 17, 2015. The U.S. economy has strengthened since a slump early this year, the Federal Reserve said Wednesday, but it wants to see further gains in the job market and higher inflation before raising interest rates from record lows. (AP Photo/Richard Drew)

Washington — For Federal Reserve officials, the U.S. economy is a glass house where aggressive moves could break something.

While the median forecast of policymakers still calls for two interest-rate increases by year-end, more officials say just one would be enough in 2015. Still more advocate a go-slow approach to further tightening in 2016.

Projections from the Federal Open Market Committee published Wednesday showed that five officials foresee one increase in the federal funds rate this year, up from just a single policy maker who said so in March. And while policy makers said the economy has picked up after a first-quarter slump, Fed Chair Janet Yellen said she still wants to see more “decisive” evidence of a lasting turnaround.

“There is concern about the fragility of the expansion,” said Jonathan Wright, a professor at Johns Hopkins University in Baltimore and a former economist at the Fed’s Division of Monetary Affairs. “Growth in the first half of the year seems to have been very weak.”

Growth slumped at a 0.7 percent annual rate in the first quarter amid severe weather, port disruptions and a stronger dollar that sapped exports. Consumers still have a high propensity to save much of their incomes rather than spend. Manufacturing has slowed, and global risks, including the possibility Greece will default on its debt, have increased.

Fed officials “just don’t have confidence yet,” said Michael Feroli, chief U.S. economist at JPMorgan Chase in New York and a former Fed researcher. “Global factors definitely hit forcefully in the first quarter and it doesn’t look like the global economy is picking up steam.”

“Although progress clearly has been achieved, room for further improvement remains,” Yellen said. “Economic conditions are currently anticipated to evolve in a manner that will warrant only gradual increases in the target federal funds rate.”

In the first five months of 2015, non-farm payrolls have expanded by just over a million workers. Residential construction has also shown signs of life as housing starts in April and May registered the best back-to-back readings since 2007.

Still, Fed policymakers reiterated in their statement that, before raising interest rates, they must be “reasonably confident” that inflation will move back to their 2 percent target over the medium term.

Yellen stressed that the date of the first interest-rate increase is less important than the trajectory of subsequent ones.

The shallower interest-rate outlook shows that this tightening cycle will be very unlike previous ones and may not be a cycle at all. In previous periods, Fed officials were intent on getting ahead of inflationary pressure that usually emerges in recoveries.

By contrast, inflation has been below the Fed’s 2 percent goal for three years, and there are few signs of a resurgence. Consequently, Fed officials are talking about data dependence, or an interest-rate cycle that will be responsive to what current indicators are saying about the near-term outlook.

Yellen stressed the Fed doesn’t intend “to follow any type of mechanical approach to raising the federal funds rate.”

“We will evaluate incoming conditions and move in the manner that we regard as appropriate.”

The immediate source of risk that may be causing some officials to lower their pace of rate increases for this year is the linkage between interest rates and the dollar. Because rates are low around the world, a fairly steep cycle of increases in the U.S. would attract capital into U.S. assets and push the dollar higher. That makes American goods less competitive abroad and imports more attractive, undercutting growth.

Yellen called the currency’s gain “a significant appreciation,” and said the drag on the economy “is going to continue for some time to come.”

The dollar has risen more than 15 percent against major currencies over the past 12 months.

“The quicker and sooner they start hiking rates, the more likely they are going to have to moderate so as not to cause a rise in the dollar,” said Robert Tipp, chief investment strategist for fixed income assets at Prudential Investment Management in Newark.