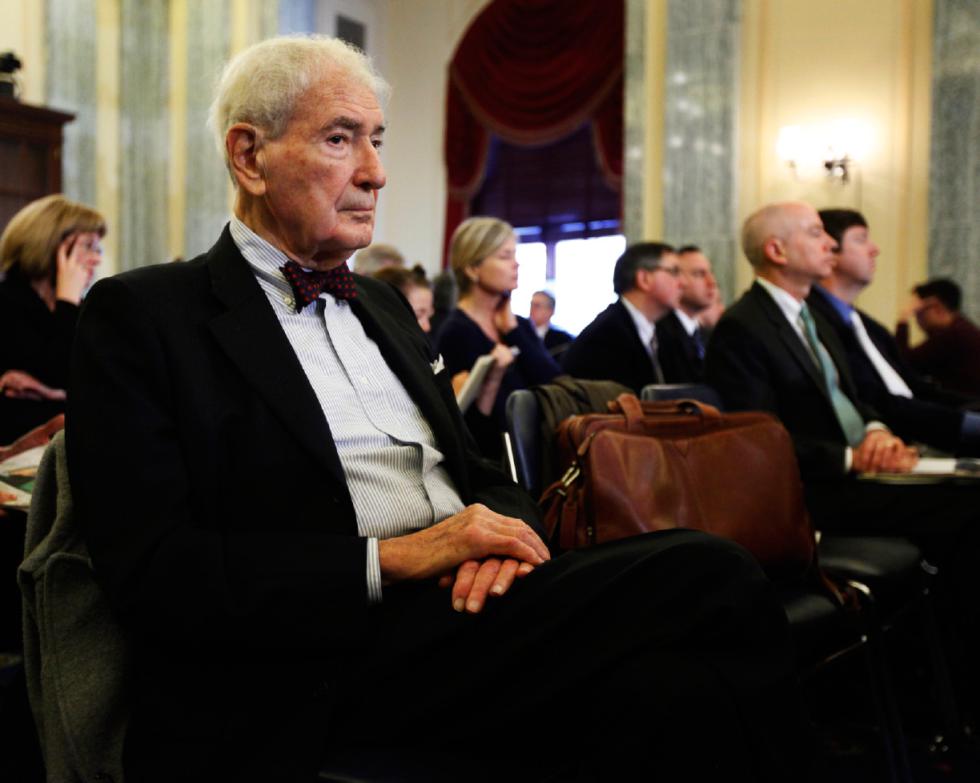 FILE- In this March 11, 2010, file photo, Comcast Corporation founder Ralph Roberts, attends a Senate Commerce Committee hearing on consumers, competition, and the proposed Comcast-NBC merger, on Capitol Hill in Washington. Roberts, a businessman with a gentle demeanor who built Comcast from a small cable TV system in Mississippi into one of the nation's largest entertainment companies, has died. He was 95. Comcast said in a statement that Roberts died Thursday, June 18, 2015, in Philadelphia of natural causes. (AP Photo/Manuel Balce Ceneta, File)

New York — Ralph Roberts, a cable pioneer who built Comcast from a small cable TV system in Mississippi into an entertainment and communications behemoth, has died. He was 95.

Comcast said in a statement that Roberts died Thursday night in Philadelphia of natural causes.

He was in his 40s when he began his career in the fledgling cable industry, with a $500,000 purchase of American Cable Systems, a company with 1,200 subscribers in Tupelo, Miss. A string of acquisitions followed. Roberts changed the name of the company to Comcast and ran it until he was in his 80s.

He handed control of the company to one of his sons, Brian, who is now Comcast’s chairman and CEO, while keeping the title of chairman emeritus.

Roberts, who was known for wearing a bowtie to work every day, had grand ambitions. “Ralph was always about what comes next, what’s the next deal,” said Steve Burke, CEO of NBCUniversal, who has worked at Comcast for 17 years. “He gave his DNA to his son Brian, who has always been a real ambitious person for the company.”

Now Comcast is the nation’s largest provider of cable TV and home Internet service as well as the owner of NBCUniversal, home of the NBC network, a slew of cable channels, film studio Universal Pictures and theme parks.

“He remade the cable industry. When he started, it was a bunch of mom and pop businesses. He’s shown that you can take that idea and transition it to a worldwide media business,” said Terry Bienstock, a former general counsel at Comcast who met Ralph Roberts in the early 1980s. “The NBC thing will be his legacy.”

Ralph Joel Roberts was born in New York City on March 13, 1920, into an affluent family. They owned a drugstore chain in Westchester County, N.Y. But things took a dire turn during the Depression.

“My father died, and we lost all our money. People who never had a financial problem in their lives can never understand what terror there is in that,” he told The New York Times in 1997.

That experience gave Roberts the determination to seek financial security.

His family moved to Philadelphia and Roberts put himself through the University of Pennsylvania. One of his first jobs was with Aitken Kynett Advertising Agency, where he worked his way up from researcher to account executive. A client at Aitken Kynett was the local franchise of Muzak Corp., the company behind elevator music. He joined Muzak and rose to vice president.

But he didn’t like the pressures of the job and sought to leave. A recruiter brought him to Pioneer Suspender Co., a maker of men’s accessories such as belts, suspenders and ties, and two years later he would buy the company.

In 1961, he noticed that beltless pants were coming into style and he became concerned that he wouldn’t sell as many belts, his company’s top product. Men also weren’t wearing ties, shirts and cufflinks as often. So he sold the company. Using money from the sale, Roberts set up an investment company. A street encounter with an acquaintance led to his purchase of American Cable Systems.

In 1969, the company was renamed Comcast — a combination of “communications” and “broadcast” — and incorporated in Pennsylvania. Roberts began acquiring smaller cable systems and built the company into the nation’s fifth-largest by 1988. Two years later, his son would become president of Comcast and continued the expansion Roberts began.

The company became the country’s largest cable TV operator, with 22 million customers, when it bought AT&T Broadband, the telephone company’s cable systems, in 2002.

Roberts often served as a diplomat for the entire cable industry, trying to bring regulators and cable executives together, said Reed Hundt, former chairman of the Federal Communications Commission. In particular, Hundt remembers the approach Roberts took in criticizing the FCC’s policies at a dinner in 1994.

Roberts stayed CEO of Comcast until 2002, when he was 82, before ceding the title of chief executive to his son. That year he also left the chairman’s post. A graduate of the Wharton School of the University of Pennsylvania, Roberts also served in the U.S. Navy. He was a well-known philanthropist in Philadelphia, supporting such efforts as Project H.O.M.E., an outreach program for the homeless.

Roberts is survived by his wife of 72 years, Suzanne, four of his five children and eight grandchildren. Brian is the only one of his children who went into the family business. “He will always be remembered for his generosity, integrity, honesty, kindness and respect for everyone around him,” the Roberts family said in a statement Friday.