‘The Internet of Things’ Has Untapped Potential

By Dominic Basulto Special To The Washington Post - Jun 28, 2015 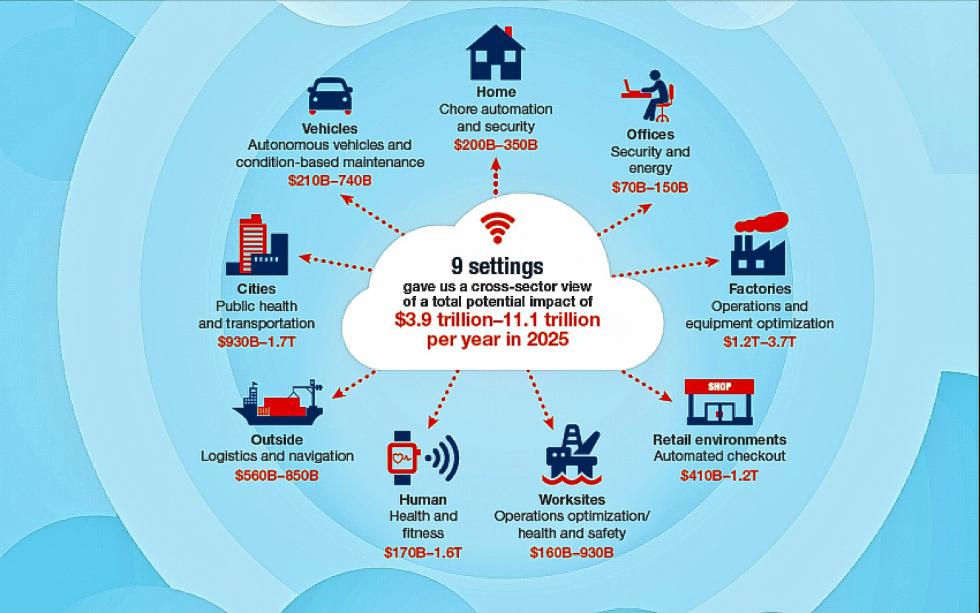 By 2025, says McKinsey, the potential economic impact of having “sensors and actuators connected by networks to computing systems” could be more than $11 trillion annually.

According to McKinsey, there are six reasons we may be underhyping the Internet of Things.

Only Using 1 Percent of All Data

What McKinsey found in its analysis of more than 150 Internet of Things use cases was that we’re simply not taking advantage of all the data that sensors and RFID tags are cranking out 24/7. In some cases, says McKinsey, we may be using only 1 percent of all the data out there. And even then, we’re only using the data for simple things such as anomaly detection and control systems — we’re not taking advantage of the other 99 percent of the data for tasks such as optimization and prediction. A typical offshore oil rig, for example, may have 30,000 sensors hooked up to it, but oil companies are only using a small fraction of this data for future decision-making.

Rather than focusing on verticals and industries (the typical way that potential economic value is computed), McKinsey takes a deeper look at the sweeping changes taking place in nine different physical “settings” where the Internet of Things will actually be deployed — home, retail, office, factories, work sites (mining, oil and gas, construction), vehicles, human (health and wellness), outside (logistics and navigation), and cities. Of that $11 trillion in economic value, four of the nine settings top out at over $1 trillion in projected economic value — factories ($3.7 trillion), cities ($1.7 trillion), health and fitness ($1.6 trillion) and retail ($1.2 trillion).

Thus, instead of focusing on, say, the automotive industry, McKinsey spreads the benefits of the Internet of Things for automobiles over two different physical settings —“vehicles” and “cities.”

In the case of vehicles, sensors are a natural fit for maintenance (e.g. sensors that tell you when something’s not working on your car). In the case of cities, these sensors can help with bigger issues such as traffic congestion.

Forgetting About The B2B Opportunity

Think of an oil work site, for example. You have machinery (e.g. oil rigs), mobile equipment (trucks), consumables (barrels of oil), employees, processing plants and transportation networks for taking this oil out of the work site.

If all those elements are talking to each via the Internet, you can optimize the work site. Oil rigs can let employees know if something’s broken, trucks can arrive on time to pick up the barrels of oil, and then all that oil can be processed and shipped off to wherever it’s needed on time and on schedule.

According to McKinsey, approximately 40 percent of the total economic value of the Internet of Things is driven by the ability of all the physical devices to talk to each other via computers — what McKinsey refers to as “interoperability.” You can think of “interoperability” as a new form of synergy — a way to increase the whole without increasing the sum of the parts.

If machines can’t talk to each other, says McKinsey, the Internet of Things might only be a $3.9 trillion opportunity. One example of interoperability is the ability of your brand-new fitness wearable to talk with your hospital or healthcare provider.

What good is your fitness device if it can’t communicate with the people who can actually use all that data?

With interoperability in health, the Internet of Things may be able to cut the cost of treating chronic disease by 50 percent.

Underestimating the Impact On Developing Economies

In terms of pure economic impact, there will be approximately a 60:40 split between economic gains for developed economies and developing economies.

As McKinsey points out, some of the greatest gains will be in developing nations, especially in areas such as retail. In some cases, developing nations will be able to leapfrog the achievements in developed nations because they don’t have to worry about retrofitting equipment or infrastructure with sensors and actuators.

Forgetting About the New Business Models That Will Be Created

It’s not just that the Internet of Things will lead to efficiencies and cost savings —but also that it will lead to entirely new ways of doing business.

As McKinsey points out, we will likely see the rise of new business models that correspond with the way we are monitoring and evaluating data in real-time. The line will blur between technology companies and non-technology companies.

For example, take the makers of industrial equipment. Instead of selling expensive capital goods, they will sell products-as-services. Instead of charging one lump sum upfront, they will charge by usage. In addition, there will be new companies that emerge that bill themselves as end-to-end Internet of Things system providers. Obviously, it’s exciting news that the world is about to get an $11 trillion economic shot in the arm from hooking up every possible object to the Internet with sensors and actuators.

At the very least, some companies are going to get awfully rich by selling sensors and RFID tags to everyone trying to cash in on the Internet of Things gold rush.

At the same time, though, isn’t there something very bleak about a future in which sensors are hooked up to every object, every setting is predictable and optimized, and pure data guides every decision rather than the human heart? Imagine a giant planned economy, overseen by a bunch of managers schooled in Frederick Winslow Taylor’s principles of scientific management, figuring out new ways to crunch the data of our daily lives. When it comes to the Internet of Things, be careful what you wish for.