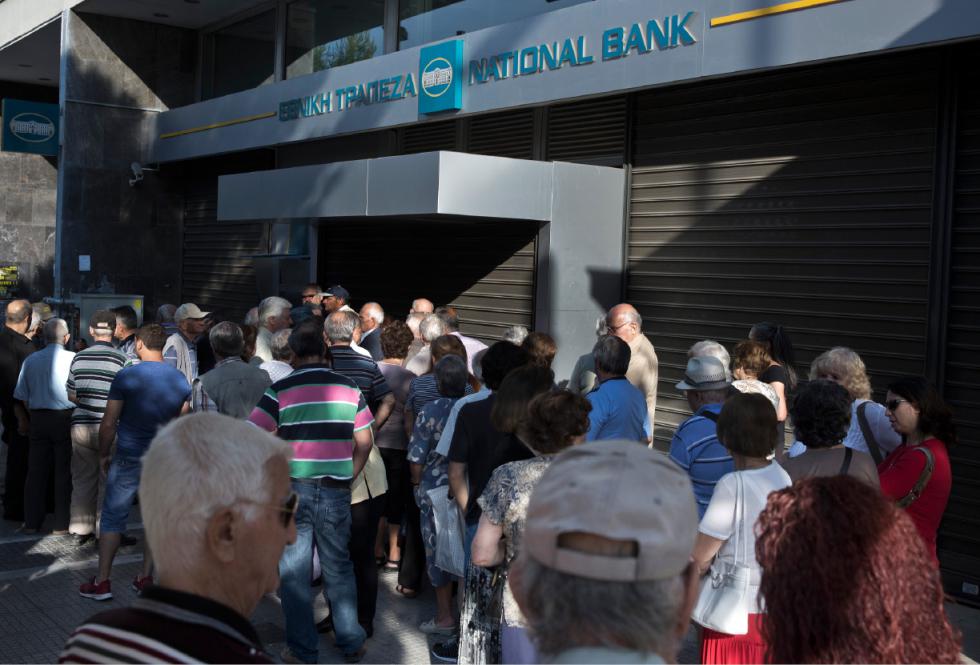 Elderly people, who usually get their pensions at the end of the month, wait outside a closed bank in Athens, Monday, June 29, 2015. Greece's five-year financial crisis took its most dramatic turn yet, with the cabinet deciding that Greek banks would remain shut for six business days and restrictions would be imposed on cash withdrawals. (AP Photo/Petros Giannakouris)

Athens, Greece — Anxious pensioners swarmed closed bank branches Monday and long lines snaked outside ATMs as Greeks endured the first day of serious controls on their daily economic lives ahead of a referendum that could determine whether the country has to ditch the euro currency and return to the drachma.

“We ask you to reject it with all the might of your soul, with the greatest margin possible,” he said on state television. “The greater the participation and the rejection of this deal, the greater the possibility will be to restart the negotiations to set a course of logic and sustainability.”

Greece’s bailout program ends today, when the country is unlikely to make a $1.8 billion repayment to the International Monetary Fund. But Athens and creditors from the IMF and the eurozone failed to agree on the terms of an extension.

Tsipras called the referendum over the weekend, arguing that demands for tougher austerity measures could not be accepted after six years of recession.

That has stoked fears of a crippling bank run, a messy Greek debt default and an exit from the euro.

As the clock ran out on a Greece deal, Greeks were handed a daily $67 cash withdrawal limit, sending crowds of elderly depositors who do not have ATM cards rushing to closed bank branches.

“I came here at 4 a.m. because I have to get my pension,” said 74-year-old Anastasios Gevelidis, one of about 100 retirees waiting outside the main branch of the National Bank of Greece in the country’s second-largest city of Thessaloniki.

“I don’t have a card. I don’t know what’s going on. We don’t even have enough money to buy bread,” he said.

The sight of an economy on the precipice hit global markets hard Monday, driving stocks down in the United States and across Europe.

In Europe, the Stoxx 50 index of leading shares ended 2.5 percent lower, while Germany’s DAX slid 3.6 percent. There also were some early warning signs that Greece’s problems may prove contagious — the borrowing rates of other highly indebted eurozone countries such as Italy and Portugal inched up slightly.

Investors are worried that should Greece leave the euro and say it can’t pay its debts, which stand at more than 300 billion euros, it will be forced into a chaotic return to the drachma — developments that could derail a fragile global economic recovery, as well as raise questions over the long-term viability of the euro currency itself.

“The major market concern is that if Greece were to default and/or exit, then it might encourage others to do the same,” said Gary Jenkins, chief credit strategist at LNG Capital. “Thus it puts the entire eurozone project at risk of collapse.”

That message was hammered home by European leaders.

“It must be crystal clear what is being decided: It is essentially the question, yes or no, to remaining in the eurozone,” German Vice Chancellor Sigmar Gabriel said.

In Brussels, European Commission President Jean-Claude Juncker said he had felt betrayed by Tsipras’ left wing government and called on Greek voters to oppose him.

“I’d like to ask the Greek people to vote ‘Yes.’ … I very much like the Greeks, and I’d say to them, ‘You should not commit suicide because you are afraid of death,’ ” he said in an emotional speech against a backdrop of giant Greek and EU flags.

Throughout Greece, massive queues formed at gas stations, with worried motorists seeking to fill up their tanks and pay with credit cards while they were still being accepted.

Electronic transfers and bill payments are allowed, but only within Greece. The government also stressed the controls would not affect foreign tourists, who would have no limits on cash withdrawals with foreign bank cards.

For emergency needs, such as importing medicine or sending remittances abroad, the Greek Treasury was creating a Banking Transactions Approval Committee to examine requests on a case-by-case basis.

Meanwhile, Greeks were dividing into two camps — with most of the opposition backing a “Yes” vote in the referendum.

Rallies were planned during the week by the “Yes” and “No” camps, with a pro-government protest drawing 13,000 people outside parliament late Monday.

Chanting “Take the bailout and go!” thousands protesters gathered in Athens’ main Syntagma Square to back a “No” vote.

“The government tried too hard to get this agreement. But the creditors kept asking for more,” said pensioner Stavroula Noutsou.