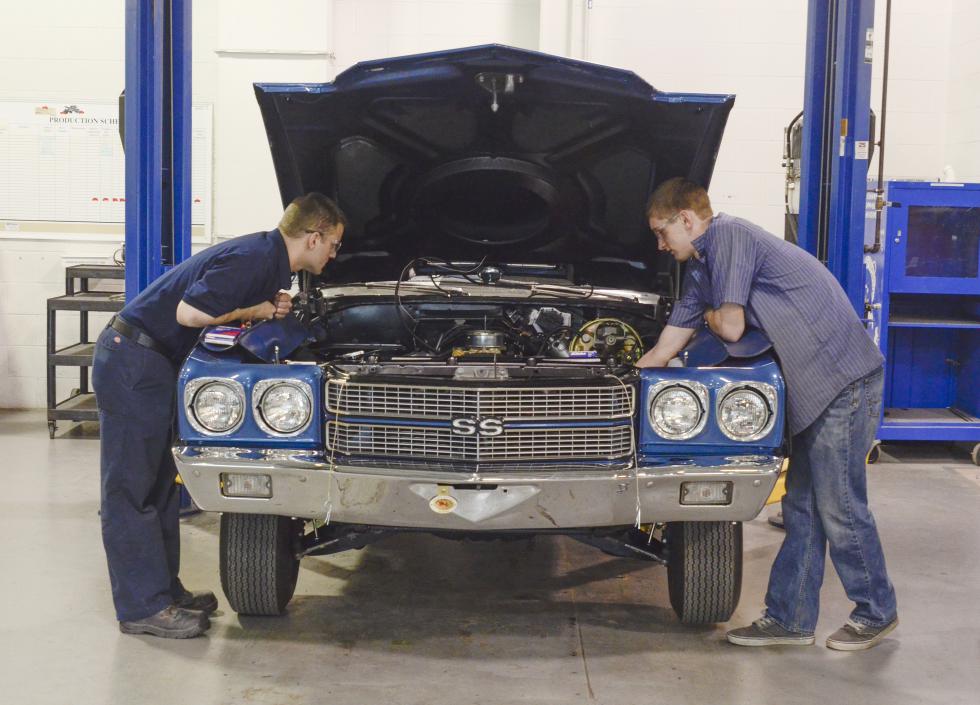 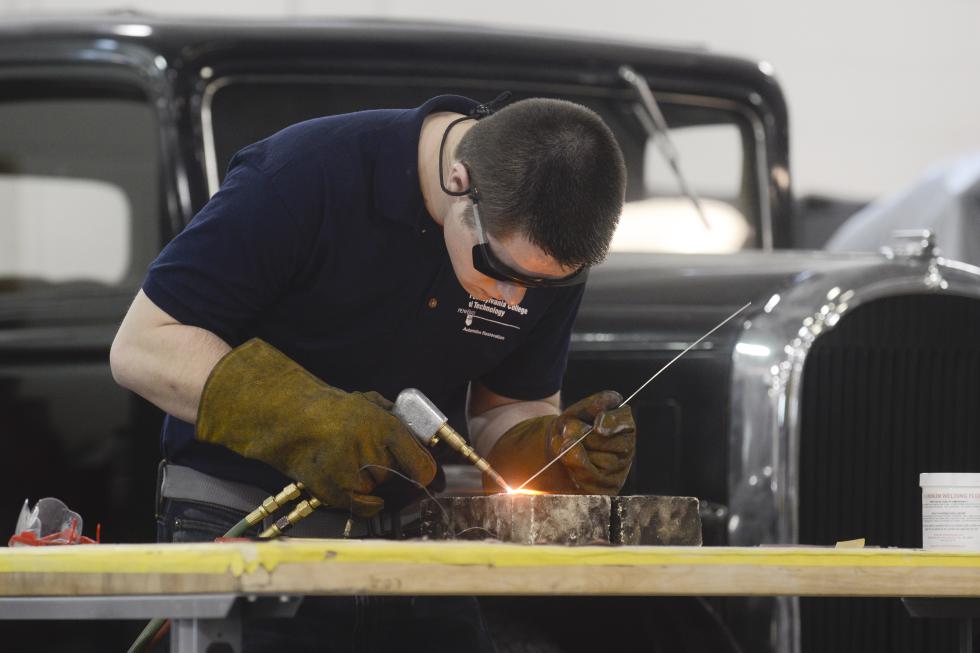 In this March 26, 2015, photo, Sean Hunter tests gas welds on aluminum while working on a 1935 Rolls Royce at Pennsylvania College of Technology in Williamsport, Pa. When Penn College of Technology revved up its vintage vehicle restoration major in 2012, it became one of just a handful of degree programs around the country teaching teens and 20-somethings how to help refurbish and maintain North Americas fleet of more than 10 million classic cars. (AP Photo/Ralph Wilson)

Hershey, Pa. — Eugene Toner stomped on the foot-operated ignition. The engine sputtered and coughed, but wouldn’t catch. Uh oh. Here at The Elegance, one of the nation’s most prestigious gatherings of antique automobiles, the exquisitely restored town cars, coupes and convertibles don’t just sit pretty. They’re expected to run.

Toner’s instructor lifted the hood to adjust the choke linkage. A few tense moments later, the 1916 Scripps-Booth Model D roared to life, allowing Toner, a 24-year-old auto restoration student from the Philadelphia suburb of Quakertown, to pull out of his spot and begin a triumphant circuit around the show grounds.

You have to expect some car trouble when your ride is a one-of-a-kind classic like the Scripps, which, after all, hadn’t been driven since 1959 — until students at Pennsylvania College of Technology in Williamsport took it out of mothballs this spring and got it back on the road.

Passion is what the hobby desperately needs from young people right now.

When Penn College revved up its vintage vehicle restoration major in 2012, it became one of just a handful of degree programs around the country teaching young people how to help refurbish and maintain North America’s fleet of more than 10 million classic cars.

“We have a huge void,” said Earl Mowrey, who heads youth development at the Antique Automobile Club of America. “There’s been a generation or a generation and a half of missed opportunity.”

Mowrey and others worry that vital skills like metal shaping and upholstering might be lost unless young people with a penchant for old cars are enticed into the field. The multibillion-dollar industry recognizes the problem of its aging workforce and has been throwing money at training programs and scholarships.

The efforts are beginning to pay off. The first graduating class at Penn College had eight students; 23 are on track to complete the program next year. McPherson College in Kansas, whose much larger program has been around for nearly 40 years and is the only school that offers a bachelor’s degree in restoration, also reports increased student interest.

With demand high, graduates usually have a job or paid internship waiting for them at a shop, museum or private collection.

“There are jobs everywhere, because people are retiring,” said Diane Fitzgerald, national director of the Hagerty Education Program at America’s Car Museum in Tacoma, Wash., which has provided $2.7 million in training and scholarship money since 2005.

As a high school student in South Williamsport, in north-central Pennsylvania, Jay Rhoads wanted to work on classic cars for a living. But his guidance counselor told him to consider auto restoration as a hobby, not a career.

Rhoads took her advice. He joined the National Guard and served in Afghanistan, then got a bachelor’s degree in criminal justice. But he realized he didn’t want a career in law enforcement.

The cars were calling.

So Rhoads enrolled at Penn College, where, this spring, he found himself under the hood of a 1970 Chevrolet Chevelle SS 454 with a growling, 450-horsepower engine. A classic muscle car.

“Just sitting behind the wheel and starting it up is enough to make your heart race,” said Rhoads, 27. The prospect of a good job also quickens his pulse: “It’s a hot, growing industry right now.”

Across the shop sat the century-old Scripps-Booth. The black town car was built to spec for Eleanora Sears, a tennis star and descendant of Thomas Jefferson, for the princely sum of $17,500 — 40 times the cost of a Ford Model T and more than $380,000 in today’s dollars.

The Scripps’ unusual pedigree posed a challenge. Coming from a museum, it was already preserved. But “there was no manual, no book, no resource that we could lean on to make this car run,” said instructor Shaun Hack.

So the budding technicians stuck to the basics: fuel, air, compression, spark. They replaced worn wiring, tinkered with the carburetor, made new gaskets. Finally, on the last day of class, they got the engine to fire for the first time in more than 50 years. Jay Leno, a noted classic car collector, came calling and took it for a spin.

Weeks later, the newly road-worthy Scripps took its place at The Elegance, where 74 of the world’s finest automobiles — from the 1964 Aston Martin driven by James Bond in Goldfinger to a mammoth 1949 Daimler DE36 drophead coupe that won Best in Show — went on display and drew throngs of auto enthusiasts.

Donned in period garb, students chatted with show-goers who stopped to admire the Scripps, take pictures and ask questions.

When it came time for the awards ceremony (the Scripps got a participation award), the show’s announcer name-checked Penn College as he talked up the students’ work.

“It’s nice to see somebody under 100 that likes (vintage) cars,” he quipped.