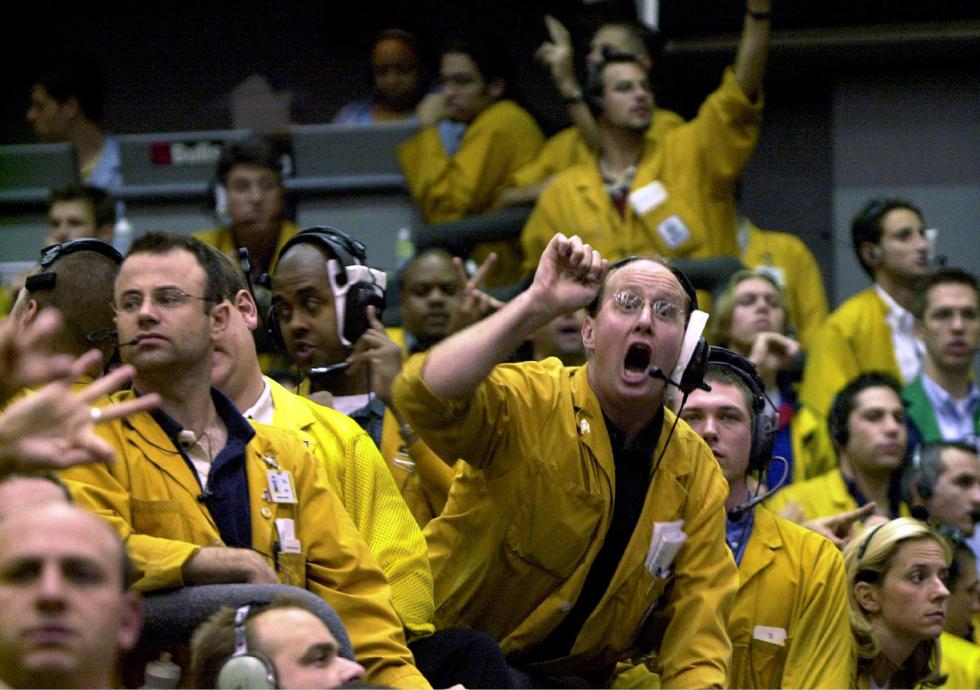 FILE - In this Sept. 16, 2003 file photo, clerks shout in the Euro Dollar Futures pit at the Chicago Mercantile Exchange. Most pits in Chicago and New York where traders bet on future prices of palladium and gold, cattle and corn and dozens of other commodities are expected to close for good on Monday, July 6, 2015. (AP Photo/Anne Ryan, File)

New York — Pete Meegan had every intention of going back to college, but then he got a summer job in the Chicago trading pits and fell in love with the “roar” of the floor, the excitement of “4,000 people yelling, ‘Buy! Buy! Buy!’ ” and decided no more classroom for him.

That roar will soon go silent. Today, most futures pits in Chicago and New York, where frenzied buying and selling once helped set prices on cattle and corn, palladium and gold, and dozens of other commodities, are expected to close for good. Traders yelled and shoved and flashed hand signals, just as they did in the movie Trading Places. But now the computer — faster, cheaper and not nearly as noisy — has taken over.

It will be a sad day for Meegan, still in the pits 34 years after dropping out of college, donning a trading jacket and mustering the courage to tell his dad.

“I thought he was gonna kill me, but he was like, ‘I don’t care if you pick up garbage or you’re a dog groomer. If you are happy doing what you are doing, you’re ahead of 99 percent of the people in the world,’” recalls Meegan, now 54.

The few dozen jobs that will be lost when the pits shut down is just part of it, veterans say. What’s also disappearing is a rich culture of brazen bets, flashy trading jackets and kids just out of high school getting a shot at making it big. The pits were a ruthless place, but they were also a proving ground where education and connections counted for nothing next to drive and, occasionally, muscle.

“If people came to your spot, you shoved them out of it. ‘This is my two-foot space … so get out of it,’ ” says Dan Sullivan, a broker who’s been working in the pits since 1981. The competition, he adds, also bred camaraderie. “These guys knew me better than my wife.”

Dan Grant, 53, traces his love affair with the pits to a $150-a-week job as a “runner” ferrying messages between clerks taking phone orders from customers and brokers executing them. Six years into his career, on Oct. 19, 1987, stocks were plunging around the world and he was a clerk taking orders from the head traders at Chemical Bank and Drexel Burnham Lambert desperate to buy anything to protect themselves. Grant still marvels that, just 24 years old and with no college degree, he wielded such power in the crash, later known as Black Monday.

“They were buying Treasurys and currencies, and watching their stock portfolios go to zero,” he recalls. “It was a lot of fun.”

The pits that are closing deal in futures, or contracts to buy or sell something at a later date at a set price. They’re used by farmers to lock in prices for their crops before harvest, for instance, and investors as a way to bet that prices will go up or down.

Not all futures pits are going away. In its February announcement about the closings, the owner of the exchanges said the pits where Standard and Poor’s 500 stock futures and options on futures are traded will remain open. Floor trading of stocks on the New York Stock Exchange, which is owned by a different company, won’t end, either.

But the few remaining pits are a small, perhaps fleeting, victory for the dwindling number of traders who still use hand signals to buy and sell. Where once futures on everything from pork bellies and wheat to Treasurys and Eurodollars were only traded in this “open outcry” system, now just 1 percent are. Where once thousands of futures traders stood shoulder to shoulder, now just a few dozen show up on a typical day.

“There were five (people) in the wheat pit today,” laments broker Virginia McGathey after the closing bell in Chicago last Wednesday. “Back in the day, there were 400.”

Scott Shellady, a broker standing nearby, worries that fewer humans could mean more violent swings in food prices. He fears turbulence could be triggered by an unusually large offer from a stranger in India or another far off place to buy or sell a futures contract.

“That pit, with 500 guys, you can’t have a flash crash because … there are 499 people that know he doesn’t normally trade that big,” says Shellady, who wears a black-and-white cow print jacket, a reminder of a time when brokers needed to stand out on the floor.

Since at least 1870, when the first octagonal pits were installed in Chicago, traders have been reading the “tone” of the crowd to sense where prices might be heading and feeling the “rush” when placing a big bet.

After more than 40 years of trading, George Gero knows all about the feel and thrill of the pits. But he is also familiar with wrenching change, and learning to adapt to it.

After fleeing from the Nazis in wartime Hungary, he came to New York, and found a home in the commodities pits downtown. And at 79, he’s still at it, marveling at how the computer allows him to find prices for gold and currencies around the world, no matter the time of day.

But Gero, a strategist at RBC Capital Markets, is not a complete fan of the new way. “It’s very cold … strictly numbers,” he says.

Grant, the runner turned clerk who now oversees his own trading firm, says he has embraced change, too. But he mourns the loss of the kind of entry-level positions that gave kids without much education a chance to prove themselves, just as he did.

“The customer doesn’t have to call anyone to execute a trade,” he says.

Sullivan, the broker, puts it bleakly.

“It’s kind of a slow death for people,” he says. “Maybe I am holding on to something that needs to go.”