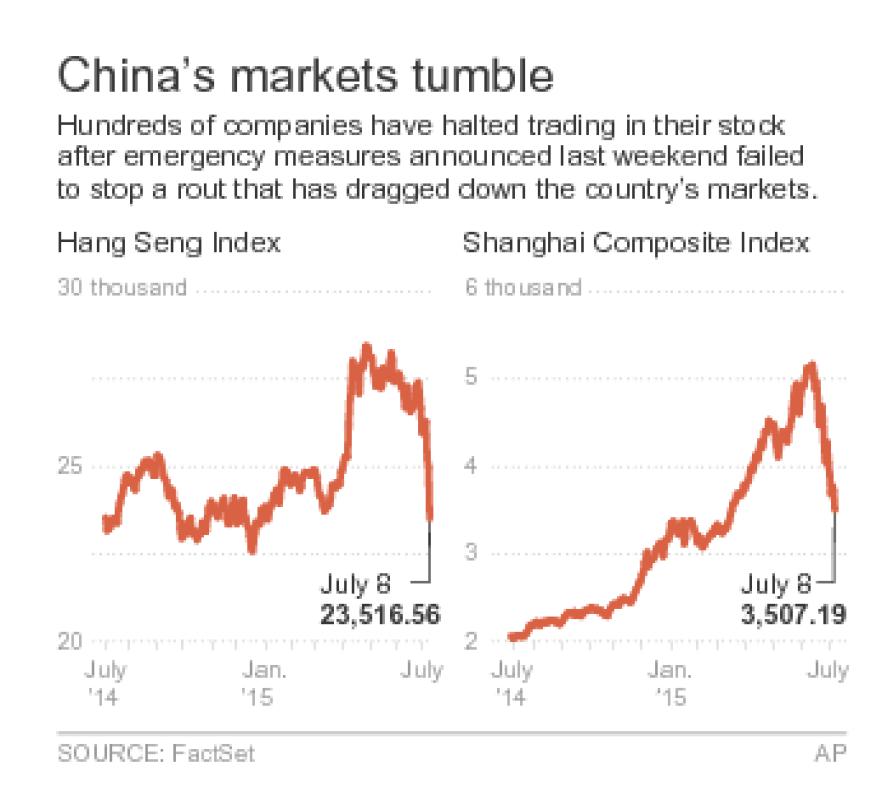 When the Chinese advertising firm Shanghai Longyun — whose name means dragon rhyme — went public on March 24, the stock market was on fire.

The company was a family affair. The chairman, Duan Peizhang, and his wife, Fang Xiaoqin, who studied Chinese medicine and worked at a provincial food and drug bureau, held more than half the shares. Other direct and indirect investors included Duan’s brother, nephew, sister-in-law and some other relatives.

Virtually overnight, they struck it rich. Between its opening trade and May 28, the stock of Shanghai Longyun jumped sixfold. The little company, which told regulators it had about 250 employees, was valued at just under $2 billion.

Then the bubble popped.

Since May 28 the stock price of Shanghai Longyun, now headed by Duan’s nephew, has plunged 69 percent, one of the steepest drops on the Shanghai stock exchange.

Is the trauma over? Not necessarily. China’s stock market is still substantially higher than it was a year ago with the Shanghai index up 86 percent and Shenzhen up 76 percent.

Shanghai Longyun is a good example of what might be froth left in the market. With trading in the stock frozen by regulators, the ad agency is still valued at $620 million, a steep price for a small firm whose revenues have grown a measly 1.8 percent over the past year and which is still selling at 36 times earnings, two to three times historic ratios.

A look at a few of the companies that have rocked China from small investors to the walled leadership compound in Beijing gives a sense of where the stock market stands — and how far it might have to go. As deep as the plunge has been, and despite efforts by the Chinese government to arrest the decline, the stock market in China might still end up falling further before it finds a stable spot.

The companies are also a mixture of new ventures and legacy state-owned enterprises, technology firms and heavy industry. Some companies embody both, revealing some of the awkwardness of an economy in a long transition from planning to free enterprise.

China Television Media is one example. The company produces television programs and operates theme parks at its production sites. But with about 1,400 employees, it is essentially a spin-off from the state-run Chinese Central Television, which owns more than half the shares. The new company offered a way for the old one to cash in.

China Television Media’s stock price soared along with the rest of the market over the past few months. The company reorganized last year and its revenues were down sharply, but it still jumped threefold from July 2014 through June 3 this year.

Then it collapsed. Now it’s down 64 percent from the June 3 peak. But the slide could continue. The company is still worth about $1 billion and is selling for 120 times its earnings.

One of the catalysts for the broad sell off was Hanergy Thin Film Power Group, a maker of solar cells whose shares on the Hong Kong stock exchange went into free fall on May 20, tumbling 50 percent in about an hour. The value of the top executive Li Hejun’s stake in the company sank $14 billion.

The reasons for the fall remain mysterious. Li is a member of the Chinese People’s Political Consultative Conference, an advisory body that meets annually along with the National People’s Congress and he has used that perch to advocate wider use of renewable energy. But Hanergy’s technology is a bit of a niche market; its flexible cells can be put on walls or even clothing. They are not as efficient as other cells in converting sunlight to electricity.

The parent company said nothing unusual had happened at the company.

“Our group (is) currently operating normally, all the business operations are running well and the capital situation is fine,” Hanergy Holding said.

Amid the stock market wreckage, however, some investors are hunting for value. Sahm Adrangi, head of New York-based Kerrisdale Capital Management, made much of his early fortune years ago by betting against Chinese companies whose claims seemed out of step with his own research on the firms.

But Adrangi said he has recently been looking for solid companies whose prices have been driven down too far. On Wednesday he purchased shares of Huabao, a supplier of flavors and fragrances for food and household products whose stock had been hammered over the past month. But unlike many firms, Huabao pays a healthy dividend and has a rapid growth rate. Its price-to-earnings ratio was around 5. Its biggest shareholders include major American investment banks.

To be sure, many Chinese companies are competing internationally. Alibaba, listed on U.S exchanges, has a market value roughly the same as its U.S. competitor Amazon.

But so far it’s been challenging. Regulators have clamped down on new initial public offerings that can prove volatile. The China Securities Finance Corp., the only onshore financial institution that provides refinancing services, said it would quadruple the size of its capital base to stabilize the market. The State Council approved the establishment of a China Insurance Investment Fund to buy shares with nearly $50 billion.

Many of the extraordinary measures have bolstered banks and insurance companies by loosening up restrictions on reserves and borrowing to buy shares, though those steps will undo financial reform efforts of recent years and will likely create new layers of bad debt.

The government has also organized securities brokerages to create an investment fund to soak up shares and have them commit to not sell shares while the Shanghai Composite Index remains below 4,500 points; ordered fund management firms to buy stocks and the country’s Social Security Fund to not sell any shares whatsoever. (The Social Security Fund sold 2 million of its 3.44 million shares of China Television Media earlier this year.)

“The only thing they could have done more drastic would have been to suspend trading altogether,” Scott Kennedy, director of the project on Chinese business and political economy at the Center for Strategic and International Studies, wrote for the center’s website.

Kennedy said that could keep the market inflated longer than might otherwise be the case. “Breaking the vicious cycle of moral hazard necessary to have a financial system operate efficiently on a commercial basis is now that much harder, as the stock market rescue may reinforce the older lessons Beijing was trying to unteach,” he wrote.