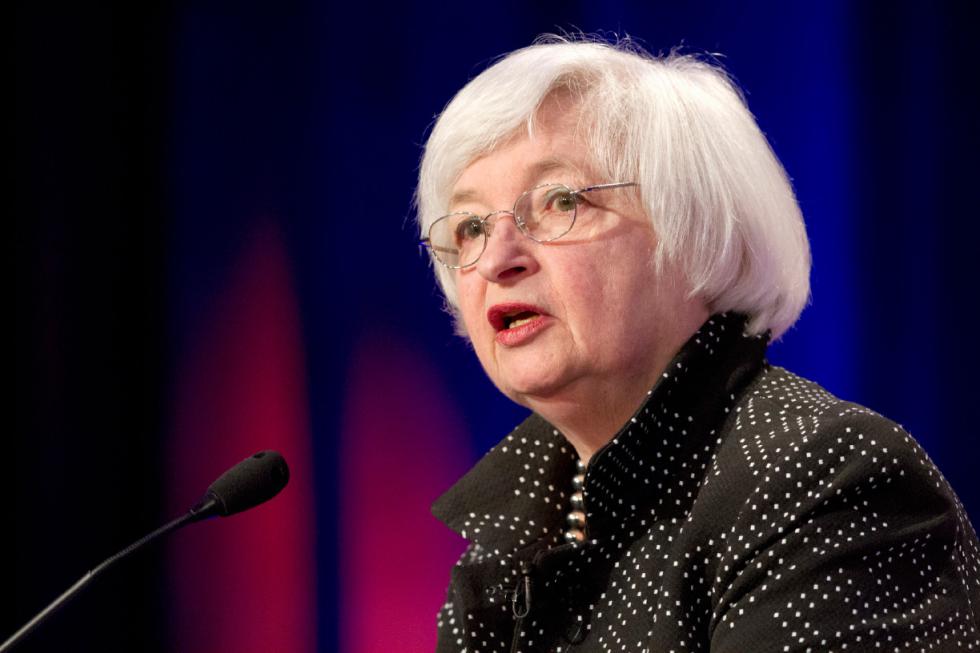 Federal Reserve Chair Janet Yellen speaks at the Institute for New Economic Thinking Conference on Finance and Society, Wednesday, May 6, 2015, at the International Monetary Fund (IMF) in Washington. Yellen said Wednesday that the Fed and other banking regulators have made significant progress in correcting flaws in the financial system that triggered the worst banking crisis in seven decades. (AP Photo/Jacquelyn Martin)

Washington — Federal Reserve Chair Janet Yellen said the Fed is on track to start raising interest rates later this year but expressed multiple concerns over headwinds that are still holding back the U.S. economy.

She described the outlook for the economy and inflation as “highly uncertain,” amid lingering weakness in the labor market and new potential threats overseas.

Yellen, speaking on the economy for the first time since the Fed’s June meeting, saw reasons for encouragement. Consumer spending appears to be picking up, and employment is likely to keep expanding, she said.

“Based on my outlook, I expect that it will be appropriate at some point later this year to take the first step to raise the federal funds rate,” Yellen said, referring to the Fed’s key short-term interest rate, which has been at a record low near zero since December 2008.

But she also outlined a host of concerns, from weak wage growth to a low labor participation rate to “disappointing” productivity. She reiterated that inflation is still well below the Fed’s 2 percent target. Yellen also noted that cautious business owners “have not substantially increased their capital expenditures.”

Yellen, whose comments came in a speech in Cleveland, said even when the Fed does start raising rates, the increases will be gradual.

New potential risks have emerged since the Fed’s June 16-17 meeting, including the on-going Greek debt crisis and a sharp plunge in China’s stock market over the past month.

Yellen noted in her speech that the “situation in Greece remains unresolved.” But she also said that the economic recovery in the 18-nation Eurozone “appears to have gained a firmer footing.” She did not mention developments in China at all, nor was she asked about Greece or China during a question-and-answer period following the speech.

The recent developments have prompted many economists to push back their projections for the Fed’s first rate hike from September to December. The Fed’s next meeting takes place on July 28-29, but there is no expectation the Fed will make a move then.

“We want to see further improvements in the labor market and with inflation running as low as it is, we want to feel reasonably confident that inflation will move up” in the next two to three years, Yellen said in outlining the landscape that will determine the timing of the first rate increase.

But she added that it would be wrong to “over-emphasize” the Fed’s initial move.

What will matter more to the economy is not when the first rate hike happens but how quickly the Fed moves rates higher afterward, she said. Because rates are likely to climb gradually, interest rates will stay at low levels for some time.

Asked what she saw as the biggest threats facing the U.S. economy, Yellen said her major focus was to learn from the mistakes made in the lead-up to the 2008 financial crisis.

“This was a devastating event that took an enormous toll on our economy,” she said. She said the Federal Reserve needs to be “much more vigilant and much better prepared” in an effort to make sure that the financial system does not see a repeat of the 2008 crisis. Yellen is scheduled to deliver the Fed’s mid-year economic report to Congress this week.