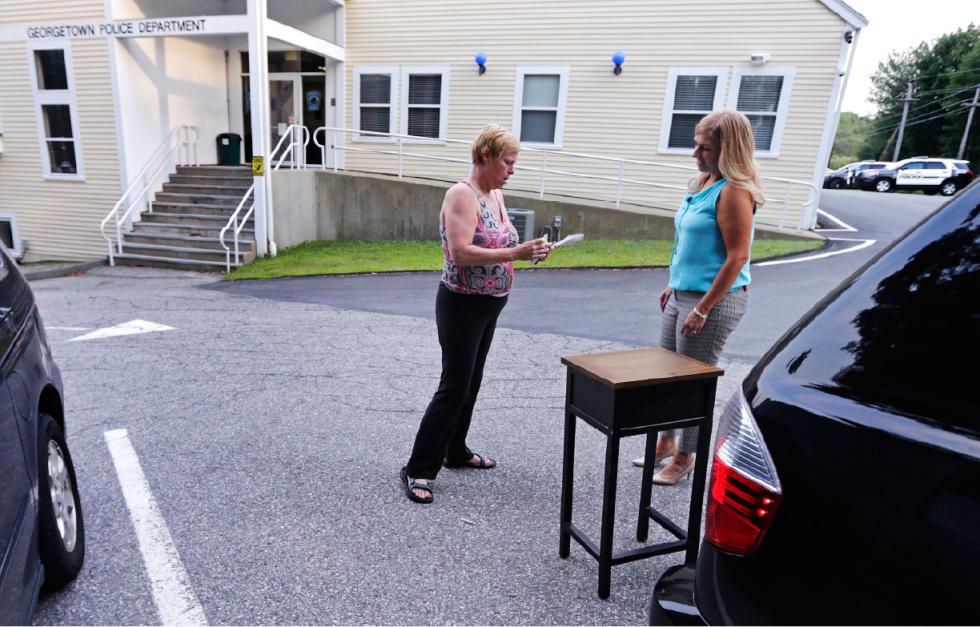 Susan Locke, left, counts out her cash as she purchases a table from Michele Velleman in the "online safe zone" outside the police station in Georgetown, Mass., Monday, July 13, 2015. Around the nation, in police department parking lots festooned with surveillance cameras, authorities are setting up an "online safe zones" where people meeting via Craigslist or buying goods via eBay can encounter each other without fear of assault or abduction. (AP Photo/Charles Krupa)

Boston — Michele Velleman needed to sell a Zumba dance fitness kit, a cellphone and a table through Facebook. So she found buyers on Facebook and made the trades at — where else? — the police station.

“It is always a little nerve-racking when you go to someone’s house. It’s in the back of your mind: ‘I hope this person is OK and everything turns out all right,’ ”said Velleman, 44, a pharmaceutical executive assistant for a pharmaceutical company who lives north of Boston in Georgetown.

“I think my mother is happier I’m doing it this way.”

“Online safe zones” like the one Velleman uses are popping up at police stations nationwide as authorities try to clamp down on crime associated with online trade between strangers. More than 100 police departments now provide space in their lobbies or parking lots where people can make their deals and know that police are only feet away.

“They have to meet them somewhere, but they don’t know who they’re meeting and they don’t really have any background on these people,” said Georgetown police Lt. Scott Hatch. “They can come here and at least they’ll feel that the person is legitimate and won’t take their money.”

A few departments began offering safe zones two or three years ago, but their popularity exploded this year after several high-profile killings as deals made on Craigslist were carried out.

∎ In January, a couple who said they wanted to buy a 1966 Mustang were shot in McRae, Ga., allegedly by a man who answered their ad.

∎ A month later, a 21-year-old college student was robbed and fatally shot in Marietta, Ga., after he responded to an ad to buy an iPhone.

∎ In March, a pregnant woman responding to an ad to buy baby clothes in Longmont, Colo., was stabbed and her fetus pulled from her womb, allegedly by the woman who placed the ad. The woman survived, but the fetus died.

∎ In May, a 19-year-old Illinois college student trying to sell his sports car was killed. Authorities charged a man they say responded to the student’s ad.

Police in Chelmsford, Mass., set up a safe zone in May after reading about the killings.

“I always tell people to do it at a neutral place, a populated place,” said Chief James Spinney. “If anybody had a diabolical plan in mind, they are certainly not going to agree to meet at a police station.”

Craigslist did not respond to requests for comment for this article. But the classified service says on its website that most of its users are trustworthy and well-intentioned. But it urges common-sense precautions including meeting in a public place, not inviting strangers into your home, having a friend accompany you, and “making high-value exchanges at your local police station.”

“The old maxim — make your trades in a public place — is not good enough,” said Peter Zollman, founding principal. “Avoiding problems is very simple. If somebody is intent on ripping you off, the odds are almost zero that they will be willing to meet you at a police station.”

Some police departments report a booming business for their safe zones.

“The citizens have eaten it up,” said police Capt. Mike McCoy in Fulshear, Texas, west of Houston.

Most police departments do not get involved in the transactions themselves, preferring to merely offer a secure location to complete online sales. But in Fulshear, police will check databases of stolen goods for anyone who requests it.

Mimi Fisher, a real estate agent, has sold snow tires, a motorcycle helmet and framed prints at the police station.

“I’ve had people come to my house, and it’s always been a scary thought for me because you just don’t know,” Fisher said. “I feel comfortable because I just know the police are right there if I need them.”