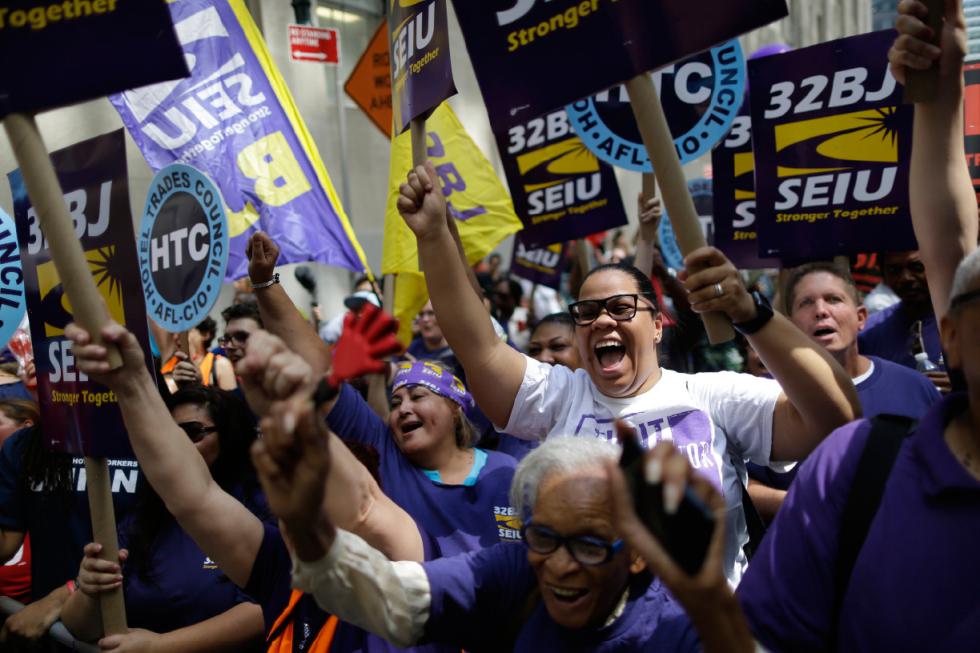 Activists cheer during a rally after the New York Wage Board endorsed a proposal to set a $15 minimum wage for workers at fast-food restaurants with 30 or more locations, Wednesday, July 22, 2015 in New York. The increase would be phased in over three years in New York City and over six years elsewhere. (AP Photo/Mary Altaffer)

New York — Gov. Andrew Cuomo wants to have it his way with New York’s fast-food industry — and restaurant owners aren’t loving it.

Franchise owners say they’re considering a lawsuit against Cuomo’s plan to raise the minimum wage in their eateries to $15 an hour, arguing that it is not fair or legal to be saddled with such a significant increase in labor costs that won’t apply to retail, landscaping, child care or other traditionally low-wage industries.

“Singling out fast food restaurants while ignoring other industries that hire workers who are paid under $15 is unfair and discriminatory, harms New York workers, and puts some New York businesses — including mine and my fellow New York McDonald’s franchisees — at a competitive disadvantage,” said Jack Bert, who owns seven locations in Queens. Labor activists say the Democratic governor’s plan to gradually increase the wage will improve the lives of some 200,000 New Yorkers. The state’s minimum wage for all other workers will remain $8.75 an hour.

The increase awaits formal approval by Cuomo’s labor commissioner, but it was endorsed by a Wage Board that Cuomo convened after attempts to raise the minimum wage across the board fell flat in the Legislature.

Lawyers representing fast-food restaurants say their lawsuit could focus on whether the increase was arbitrarily and unfairly applied to a single group.

Attorney Randy Mastro said he will review the measure before deciding whether to pursue a legal claim.

“This proposal is an irrational and discriminatory race to judgment to achieve a predetermined outcome,” he said.

The increase would be phased in over three years in New York City and over six years in the rest of the state. It would apply to any fast-food company with 30 or more locations in the state.

Cuomo and other supporters say it makes sense to target the fast-food industry because it employs more low-wage workers than any other sector. And unlike landscaping firms or child-care operators, fast-food is dominated by multinational companies with billion-dollar profits.

“You have McDonald’s, which has had unprecedented profits,” Cuomo said on public radio’s The Capital Pressroom on Thursday. “They’re paying a wage that keeps people below poverty.”

Franchisees note that most fast-food restaurants are owned by a local business person and not the national chain. And Melissa Fleischut, president and CEO of the New York State Restaurant Association, questioned the justification for treating low-wage workers differently.

“What about a Starbucks in a Target? Are the employees working the Starbucks going to make $15 while the people in electronics make $9?” she said. “We’ve never seen a single industry targeted in this respect.”

Critics are also unhappy with Cuomo for letting an unelected Wage Board issue the recommendation instead of letting the Legislature debate the idea.

Dennis Kessler owned 21 Burger Kings in western New York and now teaches at the University of Rochester’s business school. He said he believes fast-food workers deserve a raise — but that the way it was done was wrong.

“I think it was strategic,” he said. “There would have been a lot of pushback from the industry in the Legislature. He circumvented that process … I think it’s underhanded, slimy and typical of Albany.”

Workers whose jobs don’t fit the fast-food category had issues with fairness.

Abdoulaye Ahmat, a security guard at a midtown Manhattan beauty supply shop, said the same minimum wage should apply to everyone.

“If McDonald’s workers make that much, why not other people?” said Ahmat, who said he earns the minimum wage. “All of us work long hours. A job is a job, work is work.”

Tiffany Fagan, a Staples copy center employee in Manhattan, said retail workers should be included too.

“I feel like that’s not right,” she said. “We work very hard. Fast food workers work very hard under some pressured conditions, with the hot food and everything. But I feel like this should not be just for them, but for all of us.”

Lawmakers approved a series of minimum wage increases in 2013, the last of which will take the wage to $9 at year’s end. Efforts to raise it further have been blunted by the state Senate’s Republican majority.

Cuomo vowed to continue to push for a broader minimum wage increase but makes no apologies for going around the Legislature when necessary.

“I am the executive,” Cuomo said Thursday. “Therefore I use executive power.”