The Business of Agriculture: Upper Valley Farmers Fight the Battle of Bedstraw 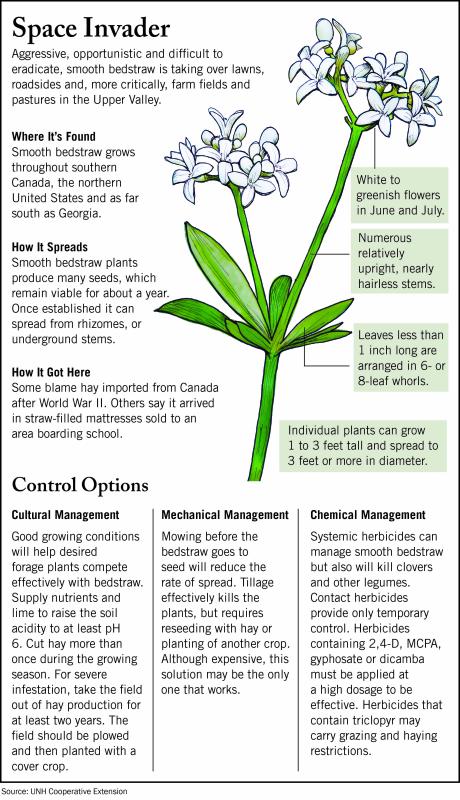 What kudzu is to south Georgia — ubiquitous, fast-growing, invasive — smooth bedstraw has become to the fields, meadows, pastures and other open lands of the Upper Valley region. And the summer of 2015 is proving to be the worst year yet with the aggressive weed, as farmers, property managers and agronomists try to figure out ways to beat the pest back, usually with only marginal success.

Smooth bedstraw especially loves roadsides, and this year the medians and flanks of interstates 89 and 91 have become vast beds of its green leaves and sickly white blossoms, and just about every highway corridor in Vermont and New Hampshire this summer has robust infestations.

Bedstraw is an opportunistic plant, and it now is showing up regularly around building foundations, parking lots and even lawns.

For many years bedstraw was considered a “poverty grass,” existing primarily in agricultural soils high in acidity and low in fertility. Land where farming activity had been abandoned supported bedstraw populations mixed in with goldenrod, milkweed and other common native field plants, while fields managed for hay crops through tillage, liming and applications of manure and commercial fertilizers seemed to keep the weed at bay.

But that began to change in the 1970s as bedstraw started to creep into well-tended hay fields and compete with desirable grasses and legumes such as timothy and clover.

In the ensuing years it became an ever-growing concern for farmers who were seeing bedstraw infestations crowding out the good plants and taking over patches of ground and then entire fields. And at midsummer this year, bedstraw’s advance has been Topic A whenever farmers get together.

The problem with bedstraw is that it’s of little value for feeding livestock. While it is high in protein in late spring, by midsummer it has become bitter and unpalatable.

When it is in its early season growth surge it has substantial mass, but as plants mature it loses its leaves and shrivels down to woody stems.

Bedstraw has a two-pronged means for expanding its grip on the land. It sheds huge quantities of seed — what plant scientists call a “seed rain” — that readily travel via wind, rain, animals and human activities and need only minimal soil contact to germinate.

And then the plant also spreads rhizomes, or tap roots, within the soil to widen its grip.

Its competitive nature can soon reduce the yields of desirable plant species, and once it gains dominance its tangle of stems forms virtual mats of vegetation that choke out all other plant growth.

Grazing animals shun bedstraw as it matures, allowing its rapid spread to continue.

As bedstraw has become an ever-larger issue for farmers, considerable research effort has been focused on finding ways to control the weed and reduce its economic impact on agriculture in northern New England.

A key figure in these efforts has been a University of Maine scientist named Rick Kersbergen, whose findings essentially lay out four different control strategies, each with its own costs and limitations.

Before trying any one of the four, however, Kersbergen found that in order to achieve any success it’s necessary to prevent the seed rain from happening by mowing down the plants before they release their seed.

That means cutting in mid-June and again in early August, as bedstraw blossoms and sheds seed twice in a season. Otherwise seed will be scattered all over the soil surface and will generate new plants the following year no matter what control efforts are attempted.

Most effective is to rotate the fields between perennial crops such as grass and an annual like silage corn. Periodic tilling of the soil destroys the bedstraw rhizomes and reduces the reservoir of seeds present in the soil.

This approach can work if the land can be plowed and tilled, but it’s a non-starter if it’s a piece of rocky, steep pasture land.

A second approach is to greatly increase application of nitrogen fertilizer in hopes it will stimulate desirable grasses to grow rapidly and outcompete the bedstraw. Trouble is, the bedstraw likes nitrogen, too, and may well keep right up with the good plants.

Then there are two other possible strategies, both of which won’t pass muster with organic farmers. One is to apply glyphosate, an old standby herbicide better known as Roundup, which will kill all vegetation on the site, and then reseeding with a specialized “no till” machine. The other is to try one of the powerful new herbicide products that manufacturers promise will be more effective against bedstraw.

Most farmers who have been waging war on bedstraw through chemical means will say results are uneven and invariably the effort is expensive.

And Kersbergen’s studies show conclusively that if the prior year’s seed rain isn’t prevented, the money and hassle most likely will be for naught.

Smooth bedstraw today is found from southern Canada to as far south as Georgia. Where it began its relentless march across this vast area is in some dispute, but its advance has clearly been facilitated by modern-day transportation. Indeed, farmers around the Upper Valley for many years have blamed the importation of hay from Canada after World War II for establishing the weed hereabouts.

There is even the far-fetched story that it arrived in straw-filled mattresses sold to a boarding school in the area.

No matter the source, smooth bedstraw is here to stay in the Upper Valley. Farmers will keep battling to stop it from taking over their fields, but it has free rein to flourish just about everywhere else it can receive direct sunlight.

On the lengthening list of disruptive invasive species in this region, bedstraw has moved close to the top.