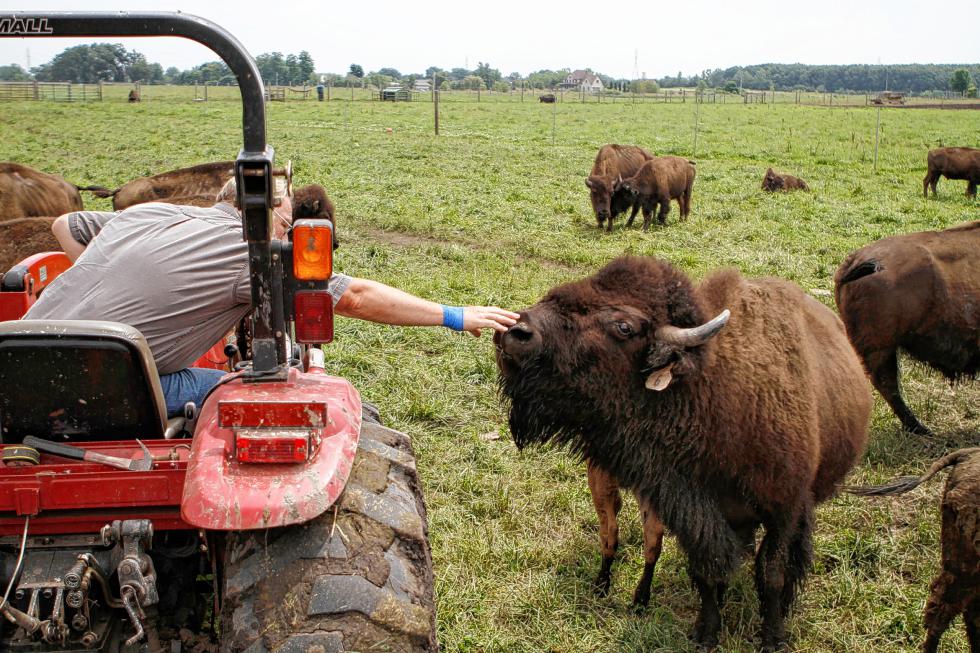 Bud Koeppen reaches out to pet a bison on July 11, 2015 at the Broken Wagon Bison farm in Hobart, Ind. The farm offers tours every Saturday. (Suzanne Tennant/Chicago Tribune/TNS)

Nestled on a back road of Hobart, Ind., the Broken Wagon Bison farm isn’t exactly what you would expect to find in Hobart. Hobart is home to Southlake Mall, and what can be considered the commercial center of northwest Indiana.

But despite that, the Koeppen brothers decided it would be the perfect place to raise a herd of buffalo.

The idea came to them in 2003, when they visited Bud Koeppen’s wedding photographer’s farm in Rockville, Ind.

“I was married in 1979,” Bud said. “And the guy who took pictures at my wedding was a computer guy. And he retired about 20 years ago and bought 120 acres, built a log cabin and started raising buffalo. And the only time we ever heard from him was a Christmas newsletter, and we’re thinking ‘how the heck could he do that?’ ”

So Bud and Wally set off to visit the farm, and the idea stuck.

That’s when the Koeppens started building the 6-foot fences that now surround the herd.

Shortly after Thanksgiving 2003, the family purchased their first bison. They bought seven females that had already been bred, two calves and one bull to run the herd.

“But then 10 didn’t look like enough,” Bud said. “Like my friend says, you can never have too many buffalo.”

Today, the Koeppens own 102 bison, including three bulls.

Now retired, the brothers are kept busy by the herd year ’round, especially during the summer. During the summer months is when all of the hay for the winter needs to be made and stored.

“Making hay is the hardest part of the job,” Wally said. “Especially the little cube bales.”

This summer’s high rain totals have provided a challenge to the Koeppens. Because of all the wet weather in northwest Indiana, there haven’t been enough days in a row to bale the acres of hay.

“We’re five weeks behind,” Wally said. “There are 86 acres of hay and less than 20 acres are done. It’s not looking good.”

But the summer rain has also been beneficial to the herd. They enjoy the cooler temperatures and it’s better for the grass they graze on.

“The grass in the pastures is growing faster,” Bud said.

The herd is rotated through a series of pastures during the summer, so that no space is grazed all the way down at one time.

Rotating the bison between fields is one of the more exciting jobs the Koeppens do.

“You open the gate and get out of the way,” Bud said. “Mud and dirt rain down on you, and you’re inches away as they run past you.”

The brothers may be able to get close to the bison, but that doesn’t mean that they aren’t wary of what the animals can do.

“I respect them an awful lot,” Bud said. “With Big John, the first-breed bull, he would put his tail up and bang his horn on the steel fence. And we’d just tell him that he couldn’t get through to us.”

But then a friend told Bud and Wally to try something new: to back up from the fence as a show of respect to the bull.

“And after that, everything changes,” Bud said. “He doesn’t show aggression. He knows that we respect him and he respects us.”

Big John has even been able to provide safety to the brothers, when one of the female bison charged the fence.

“He saw her heading for the fence and blocked her,” Bud said. “And when she looped around and tried again, he blocked her again, so it wasn’t a fluke.”

“We sell to Suzie’s Cafe in Valpo and Tate’s Place in Portage, and some local restaurants on part-time,” Bud said. “And then we sell some here.”

The farm has a store attached to one of the barns, where they sell the meat, hides, skulls and other bison-themed trinkets.

But just because the brothers are able to get up close and personal with the animals in the fields, doesn’t mean that they consider themselves modern-day cowboys.