By Danielle Paquette and Peyton Craighill The Washington Post - Aug 9, 2015 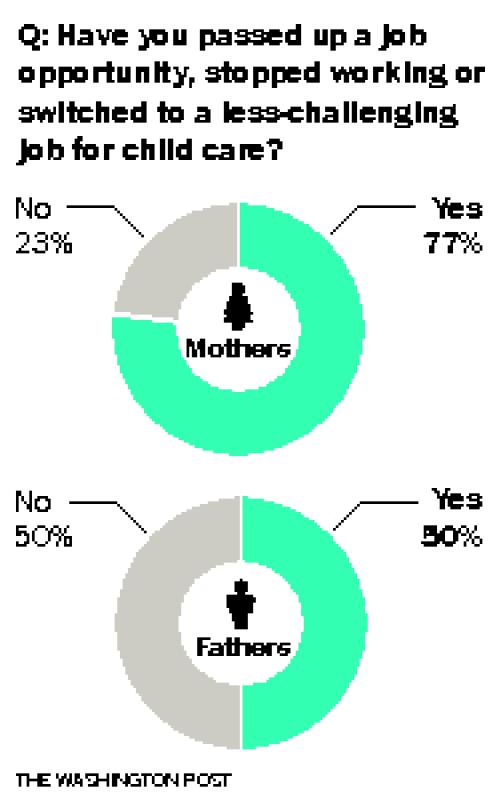 Washington — More than three-quarters of mothers and half of fathers in the United States say they’ve passed up work opportunities, switched jobs or quit to tend to their kids, according to a new Washington Post poll.

While it has long been clear that finding affordable, dependable child care is a daily challenge for parents of young children, the new poll provides rare data on the breadth of the problem and how it’s shaping careers for millions of American parents.

The poll also signals that the issue will figure in the 2016 presidential campaign, with about twice as many Americans saying Democrats would more reliably ensure access to child care than Republicans.

For many parents, scaling back at the office has become a necessity when the cost of child care strains even a middle-class salary. Roughly three-quarters of parents with children younger than 18 say care is expensive in their area, The Post’s poll shows, and a little more than half say it’s hard to find.

“Ask any parent: It’s not working for them,” said Helen Blank, director of Child Care and Early Learning at the National Women’s Law Center. “It’s a stretch for all of them. Because we as a country haven’t yet come to grips with how important affordable, quality child care is to our economy.”

Over the past 30 years, average weekly child-care expenses for families with working mothers who paid for the service surged more than 70 percent — from $87 to $148, based on data from the Census Bureau. And some areas are significantly more expensive than others. The annual cost for infant care, for instance, is about $5,600 in Louisiana, compared with about $22,000 in the District of Columbia, according to Child Care Aware of America, a national organization focused on the quality of child care.

Politicians are beginning to seize on the politics of child care, with Democratic presidential candidate Hillary Rodham Clinton staking out the issue as central to middle-class stagnation. Advocates on the left want more public funding for high-quality care. Those on the right, weary of more government spending, would rather see tax breaks for businesses that cater to parental needs.

When asked which party they trust to handle the matter, 43 percent pick Democrats, while 22 percent of Americans chose Republicans, according to the poll. Nearly one-fifth of the public, however, said they lack faith that either party could reduce the stresses of working parents. A 51 percent majority endorse federal requirements to give employees more flexibility in their work schedule to care for children, while 42 percent think businesses should be allowed to decide how much flexibility to offer.

More than 6 in 10 Democrats and 54 percent of independents support requirements for greater flexibility, but 32 percent of Republicans say the same.

Without any rules governing how much flexibility workplaces should offer, some parents are picking jobs based largely on whether they provide family-friendly benefits.

Brandon Schiwal’s wife was eight months pregnant when he took a significant pay cut. He had no paternity leave and said his boss refused to approve vacation days after the baby was born.

“It was almost Christmas, the slowest part of our year,” recalls Schiwal, 31, an accountant in Bismarck, N.D. “He made it clear that, once Milo came, I’d have just one day at the hospital.”

So Schiwal switched to a job that offered more flexibility but slashed his potential earnings by a quarter, although the couple faced $85,000 in student debt. His wife, an environmental scientist, also received no paid leave. She returned to work three weeks later, toting Milo to her desk. They now spend about $1,000 monthly on day care, an amount that nearly matches their monthly mortgage.

“Child care is also workforce support,” said Michelle McCready, deputy chief of policy at Child Care Aware of America. “It’s critical for parents and families to have a reliable option so they can work and so they can have a peace of mind while they’re at work.”

Infant care in particular is pricey. The average annual cost of infant-center-based care is virtually the same as the average cost of tuition and fees at a four-year public college, according to the Committee for Economic Development. “No state provides adequate child-care supports to a majority of children under 5,” a recent analysis from the Institute for Women’s Policy Research found.

One month after her daughter was born, Julie Waltz-Stalker decided to return to work. She yearned to teach art to elementary school students and fought boredom at home in Corning, New York.

But by her calculations, the wages wouldn’t cover the day care bill. The payments on their house already devoured most of her husband’s manufacturing salary. Nearly three years later, she’s still home with her toddler, Fiona.

“I feel like I’m losing my autonomy,” said Waltz-Stalker, 31. “I want to work. I can’t afford it. And as time passes, I feel more behind and less qualified to go back.”

In Sandy Springs, Ga., Shakyna Baynes, 30, could not afford school clothes for her three small children. Her boyfriend’s warehouse job covered little after the rent.

So Baynes applied for a sales associate job at Enterprise Rent-A-Car. Bubbly and talkative, she was thrilled to receive an offer. Next came sticker shock, she said: The cost of day care prevented her from ever starting.

Most parents say they are fine with the flexibility offered by their employers to schedule time for their children.

Among those who worked after having their first child, two-thirds say they were satisfied with the flexibility in their work schedule to care for their child.

But working mothers report less satisfaction with their employer-set schedules than working fathers; 59 percent said they were pleased, compared with 76 percent of dads. More than 6 in 10 mothers said they have had to quit a job or switch to a less-challenging one to allow more time for their children, compared with less than 4 in 10 fathers.

As men and women ascend the professional ladder, pay disparities widen between the genders, said Valerie Wilson, director of the Economic Policy Institute’s Program on Race, Ethnicity and the Economy.

That’s partly because women generally take more time off to care for kids, particularly if they are single and even if they earn more than their partners.

Valerie Shore, a student at the Rutgers School of Law and mother of a 2-year-old, said she already knows she won’t want a job that’s too demanding after she graduates.

She spends $1,200 monthly, roughly the same cost of her rent, on full-time day care in Princeton, N.J., while she works as a summer associate at a law firm.

“At the end of the month, when the bank account is getting low, we’ll just start having spaghetti for every meal,” said Shore, 26.

The poll was conducted June 24 to July 5 among a random national sample of 1,636 adults reached on conventional and cellular phones. Results from the full survey have a margin of sampling error of plus or minus three percentage points; the error margin is six points among the sample of 391 parents with children younger than 18.