Colo. Mine Spill Worse Than Thought 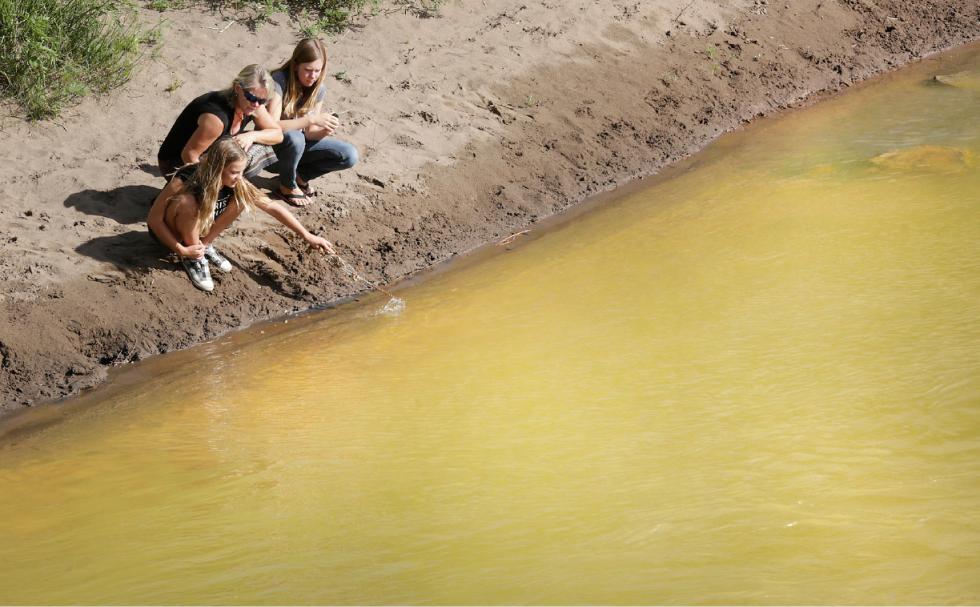 Kim Cofman and her daughters Acacia, 12, left, and Cayenne, 14, try to stir up sludge from the Gold King Mine that covers the bottom the Animas River on Saturday, Aug. 8, 2015, in Durango, Colo., near the 32nd Street Bridge but find the only way to disturb it is to dig into the yellow muck. Toxic waste is still flowing from the Gold King Mine. (Jerry McBride/The Durango Herald via AP)

Albuquerque, n.m. — Farmers, towns and tribes slammed water-intake gates shut as a sludge-laden plume from a Colorado mine spill rolled down principal rivers in the desert Southwest on Monday, prompting local officials and families to demand answers about possible long-term threats from heavy metals borne along by the spill.

Colorado and New Mexico declared stretches of the Animas and San Juan rivers to be disaster areas as the orange-colored waste stream estimated to be 100 miles long churned downstream toward Lake Powell in Utah after the spill Wednesday at the abandoned Gold King mine.

The Navajo Nation, which covers parts of New Mexico, Utah and Arizona, also declared an emergency as it shut down water intake systems and stopped diverting water from the San Juan River.

Members of the tribal council were frustrated during a meeting Monday and echoed the sentiment of New Mexico officials that the federal government needs to be held accountable.

New Mexico Gov. Susana Martinez, who toured the region over the weekend, said she was heartbroken and called the spill a catastrophe.

The 3 million gallons of mine waste included high concentrations of arsenic, lead and other heavy metals. Workers with the U.S. Environmental Protection Agency accidentally unleashed the spill as federal and contract workers inspected the abandoned mine site near Silverton, Colo.

The EPA has said the contaminants were rolling too fast to be an immediate health threat. Experts and federal environmental officials say they expect the river system to dilute the heavy metals before they pose a longer-term threat.

The EPA said stretches of the rivers would be closed for drinking water, recreation and other uses at least through Aug. 17.

Dissolved iron in the waste turned the long plume an alarming orange-yellow — a look familiar to old-time miners who call it “yellow boy” — so “the water appears worse aesthetically than it actually is, in terms of health,” said Ron Cohen, a civil and environmental engineering professor at the Colorado School of Mines.

Tests show some of the metals have settled to the bottom and would dissolve only if conditions became acidic, which isn’t likely, Cohen said.

The best course for the EPA would be to leave the metals where they settle, he said, noting that next spring’s mountain snowmelt would help dilute the contaminants further and flush them downstream.

No die-off of wildlife along the river has yet been detected. Federal officials say all but one of a test batch of fingerling trout deliberately exposed to the water survived over the weekend.

As a precaution, state and federal officials along the river system have ordered public water systems to turn off intake valves as the plume passes. Boaters and fishing groups have been told to avoid affected stretches of the Animas and San Juan rivers, which are crowded with rafters and anglers in a normal summer.

Congress members, state officials and residents contend the EPA is not providing quick answers about long-term impacts from the spill.

“There are more people who want to know, ‘OK, what’s going to happen now? Are you going to fix this?’ ” said Michele Truby-Tillen, a spokeswoman for the San Juan County Office of Emergency Management in New Mexico. “How are we going to protect our families? How long am I not going to be able to shower at my house?”

Navajo Council members and New Mexico Environment Secretary Ryan Flynn said the EPA needs to compensate those who have been affected.

The state also has demanded that the federal government develop a plan for helping farmers who have been left without irrigation water.

In Cedar Hill, N.M., a family farm that serves as many as 3,000 customers in the Four Corners region has been forced to stop irrigating dozens of acres of crops.

“By the weekend, without any rain, we’ll be in trouble,” she said. “There’s nothing we can do but wait and see what happens.”

Members of New Mexico’s congressional delegation sent a letter to EPA Administrator Gina McCarthy, expressing concern over the failure of the agency to notify New Mexico sooner about the problem.

They also asked that the federal agency develop a plan for dealing with the lack of water for communities in San Juan County and the Navajo Nation.

The EPA released a statement saying it was sharing information as quickly as possible with the public as its experts evaluate any effects of the spill. It also provided information about its claims process.

Recreational businesses along the rivers said they were losing thousands of dollars.

“We don’t really know what the future holds yet,” said Beezley, who estimates that he’s lost about $10,000 worth of business since the spill last week. “We don’t know if the rest of this season is just scrapped.”

The EPA has considered adding a section of the Animas River in Colorado as a Superfund cleanup site at least since the 1990s because heavy metals from Gold King and other defunct mines were killing fish and other species.

The designation would have brought federal clean-up funds, but some in Colorado opposed the move in part because of the stigma attached. The EPA agreed to allow local officials to lead clean-up efforts instead.