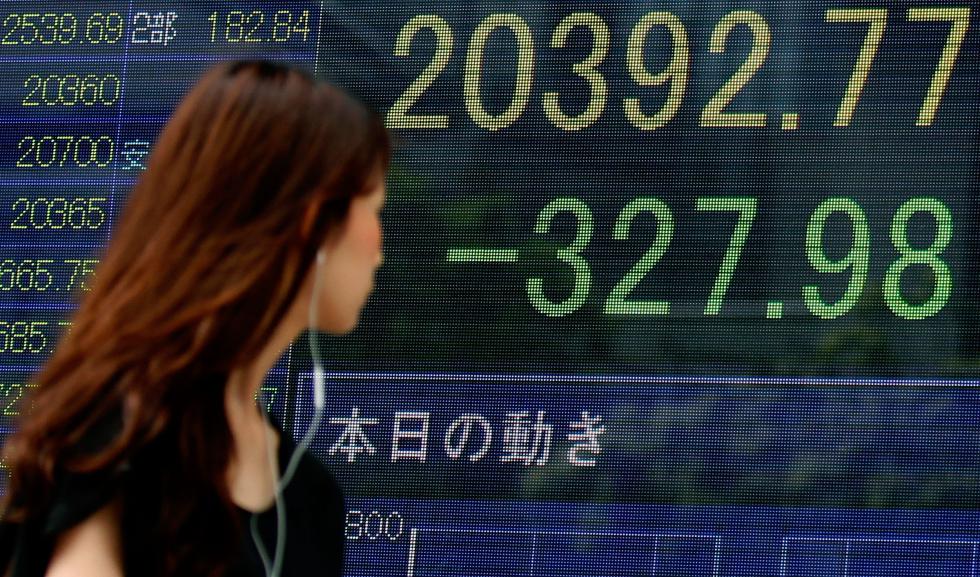 A woman walks past an electronic stock indicator of a securities firm in Tokyo, displaying Tokyoâs Nikkei 225 that lost 327.98 points or 1.58 percent to 20,392.77, Wednesday, Aug. 12, 2015. Asian stocks sank as China let its currency fall for a second day following a surprise devaluation that rattled global financial markets. (AP Photo/Ken Aragaki)

Washington — China’s surprise move this week to readjust the peg at which its yuan trades against the U.S. dollar and other currencies prompted cries of manipulation and sent stocks skidding globally. But some economists think China just undertook a huge step that developed nations have long demanded — letting markets determine the value of its currency.

China caught everyone off guard Tuesday when it announced a revision in the way it fixes the central exchange rate, effectively devaluing the yuan against the U.S. dollar by 2 percent. It followed Wednesday by lowering its “official midpoint” for the currency’s value by 1.6 percent.

The value of the yuan can rise or fall 2 percent a day from that midpoint, meaning that further devaluation of the yuan is likely despite assurances by Chinese authorities of a “one-off” devaluation.

“More likely is that this is the latest desperate measure by Chinese officials to revive economic growth,” Ed Yardeni, a veteran financial analyst, wrote in a private research note to investors.

Overall, the Chinese economy is struggling to grow at 7 percent, off its expected pace. Its stock market suffered a massive selloff last month, prompting the government to suspend trading of more than half of listed Chinese companies.

This week’s devaluation could help Chinese economic growth, but at the expense of the United States. The action makes U.S. exports of grains and meats to China more expensive, and imports of shoes and electronics from China into the United States cheaper when sold at Wal-Mart, Target and elsewhere.

Much is at stake for U.S. companies that derive their profits from China, such as automaker General Motors, which earned more than $1 billion from Chinese sales in the second quarter of this year.

Still, even GM believes its exposure to the Chinese devaluation is “limited and manageable.”

The devaluation won’t “have a material impact on the company’s financial performance,” GM said in a statement, noting that it builds cars in China so its costs will remain largely unchanged by the devaluation.

“General Motors’ primary approach to managing foreign exchange risk has been to employ a natural hedge by building vehicles for sale in each of our major markets,” the statement said.

The devaluation will mean that GM’s China profits will amount to less in dollar terms. But if China’s economy rebounds in response, a rising tide will lift all boats.

For consumer giant Apple, the parts it uses in the assembly of iPhones and iPads just got cheaper.

“It will effectively reduce what they are paying for those components,” said Gus Faucher, a senior economist for PNC Financial Services Group in Pittsburgh. “That’s a positive for Apple.”

U.S. lawmakers have long alleged that China unfairly pegs its yuan low to gain competitive advantage. The move could now encourage other emerging markets to lower their currencies, perhaps an opening volley to global currency wars.

Time will tell. One sign to watch, said Faucher, is the pace at which China allows its currency to further depreciate.

“Is it trying to do a rapid devaluation in week or two … or is it allowing its currency to gradually be where it would be if it was freely floating, which is a market-based?” he asked.

This week’s action clearly was taken in part as an effort to stimulate a sagging Chinese economy. That’s not unlike steps taken by the U.S. Federal Reserve to boost the U.S. economy coming out of the Great Recession, which effectively made the dollar cheaper.

The subsequent U.S. recovery and crises in Europe and Japan have left the dollar very strong, and by default China’s yuan also, since it is pegged to the dollar. China’s central bank actually had been intervening to maintain the stronger yuan against market forces that would normally signal a weakening.

“The action taken by China, far from being a step to manipulate its currency, is actually an effort to let the (yuan) fluctuate according to the dynamics of the exchange markets,” said Nicholas Lardy, a recognized expert on the Chinese economy at the Peterson Institute of International Economics.

China, he said in a blog Tuesday, “may well be concerned about an economic slowdown accompanied by a slump in exports, but its motivation for this move is almost certainly tied to another objective.”

That objective is China’s stated goal of having the yuan join the U.S. dollar, the euro, the British pound sterling, and Japan’s yen as one of the world’s reserve currencies. To do so, the yuan’s value must be much less managed by the government than it is today.

If the International Monetary Fund in November agrees to include the yuan as one its international reserve currencies, it would mean China’s currency could be held in central-bank vaults across the globe and used to pay off obligations for international debt.

It could then challenge the supremacy of the world’s four major currencies.