New Ways of Feeding the Needy 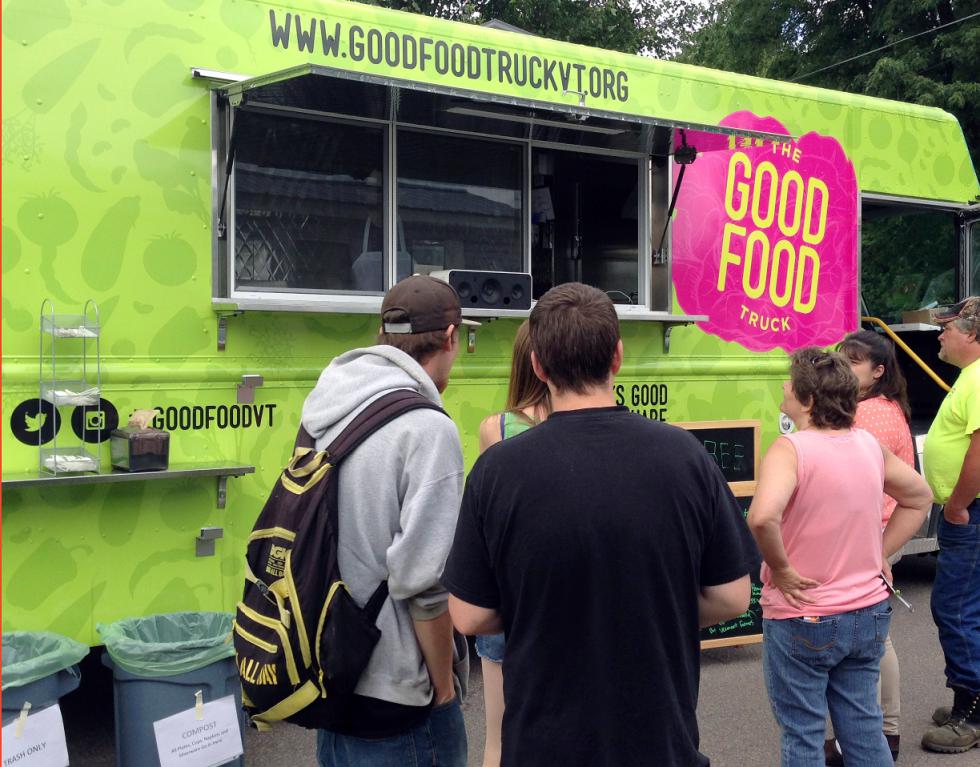 In this Aug. 5, 2015 photo, people wait for meals at the Chittenden Emergency Food Shelfs truck, during a stop at a mobile home park in Milton, Vt. The truck delivers meals made from produce donated by local farms to two outlying communities each week. (AP Photo/Lisa Rathke)

Charles Scott is shopping for groceries at a Philadelphia food pantry, busily clicking away at a computer to select his choices of onions, tomatoes and frozen corn.

Scott’s budget is tight since he was disabled from a work-related injury, so he turns to the Mitzvah Food Project at the Kleinlife center. The pantry is among the vanguard of hunger-relief operations that have installed a digital ordering system.

“I think it’s wonderful,” Scott said. “It makes you feel like you’re in control.”

At a food truck in Milton, Vt., Cindy Lefebvre picks up free dinners of donated food from local farms when her family finances run low. The truck has made its weekly stop in her mobile home park. This night, she, her husband and two sons will sit down to a meal of meatballs, kale cooked in cider, corn bread and salad.

One out of 6 people in the United States struggles with hunger, says Chicago-based Feeding America, the national office for 200 food banks that supply 60,000 pantries and soup kitchens. Now with help from technology, local farms and food trucks, the community outlets are finding new ways to bridge the hunger gap.

“It’s very helpful, especially in the middle of the week,” Lefebvre said. “Things are tight and it’s nice to not always have to cook … so it’s a break for me and everybody gets a healthy meal.”

The digital ordering system in Philadelphia provides choice and nutrition in what organizers say is a more dignified approach. Customers choose items using a mouse or touchscreen; a printout of the order appears in a storage area where volunteers gather the food and help bag it.

Over the coming weeks, organizers will pilot a program that allows disabled seniors to order pantry items from home and have them delivered.

“We’re really on the cutting edge of bringing the nonprofit sector into the 21st century here,” said Brian Gralnick, director of social responsibility for the Jewish Federation of Greater Philadelphia, which operates the Mitzvah pantry.

On shoestring budgets and with limited staffing, often volunteers, food pantries have struggled to modernize. They typically shelved staples like rice, beans and canned produce, and collected and distributed food as they could.

But in the last 10 years, there’s been a greater focus on providing healthy nutritious foods and more fresh food coming in; more produce “rescued” from farms, orchards and food processors; and more food collected from grocery stores after the sell dates, said Ross Fraser, a spokesman for Feeding America.

The organization is moving significantly more perishable products than it used to, he says. Many food banks now have mobile food pantries: trucks with rollup sides that pull up on parking lots in targeted neighborhoods and deliver refrigerated and dry foods, Fraser said.

Before going digital, Mitzvah operated like many pantries — using a Depression-era model of a prepacked box that didn’t honor a client’s choice or dietary or cultural preferences. Gralnick said research showed some food wound up in the trash.

“That is not what we wanted to see in terms of honoring our donors’ dollars,” he said.

Food trucks are helping with the persistent problem for people without cars or access to public transportation and some providers, like the Vermont Foodbank, are working to get fresh food and perishable products directly to people in schools and low-income and senior housing facilities.

“It’s healthy food, it’s in communities where people are underserved. It’s creating better access. That’s really what our job is as food providers for people in need,” said Judy Stermer, a Foodbank spokeswoman. “If we can create better access to healthy foods and to food that’s affordable, free to people, we’re going to do a better job making sure that people have the food that they need.”

Direct distribution also eliminates the discomfort some people feel, due to social stigma, in going to a food pantry.

The Chittenden Emergency Food Shelf in Vermont discovered that about 19,000 to 20,000 people in the county were eligible for its services, but the Food Shelf was serving only a little more than half of them.

With a food truck, the organization could meet people where they live in a familiar comfortable environment while also overcoming transportation barriers, said Emmet Moseley, who manages the Good Food Truck.

“Food trucks, like what’s happening at Chittenden Emergency Food Shelf, these are popping up all over the place. It’s incredible,” Stermer said. “People are really getting creative about how to get good food where it needs to go.”