EPA Knew of ‘Blowout’ Risk At Gold Mine 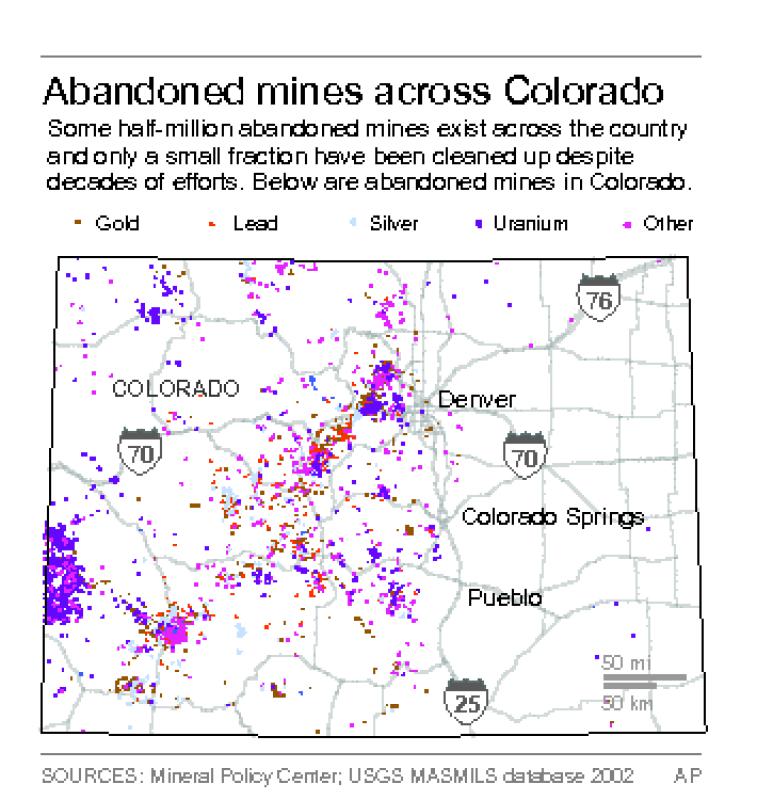 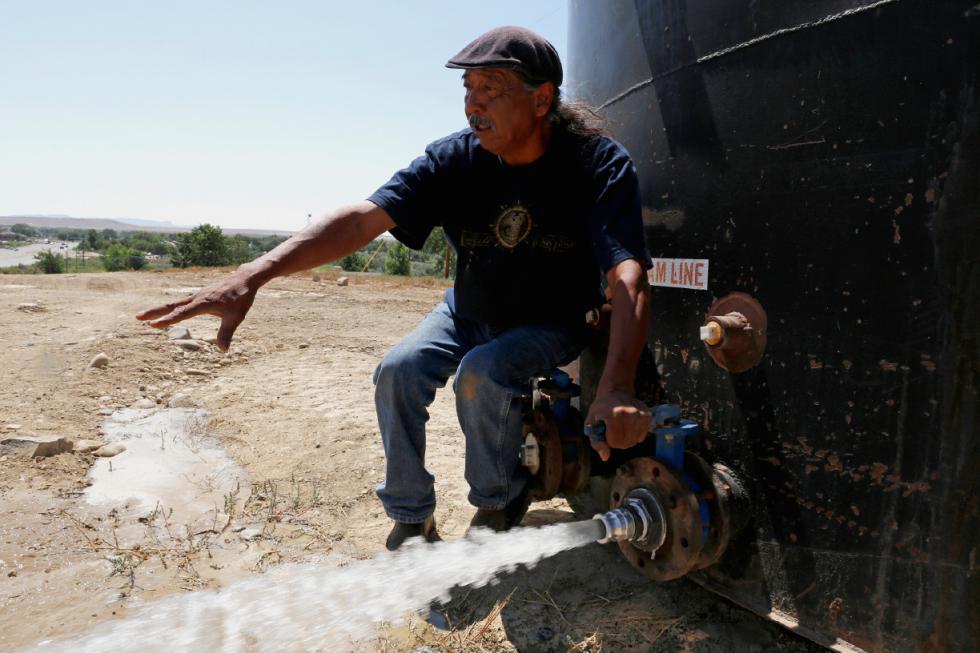 In this Aug. 18, 2015 photo, Joe Ben Jr., Shiprock Chapter House Farm Board representative, tests the water from tanks at the Chief Hill location in Shiprock, N.M. The quality of San Juan River water on the Navajo Nation has returned to what it was before a spill at a Colorado gold mine sent toxic sludge into the waterway, federal officials said Thursday. (Alexa Rogals/The Daily Times via AP) MANDATORY CREDIT 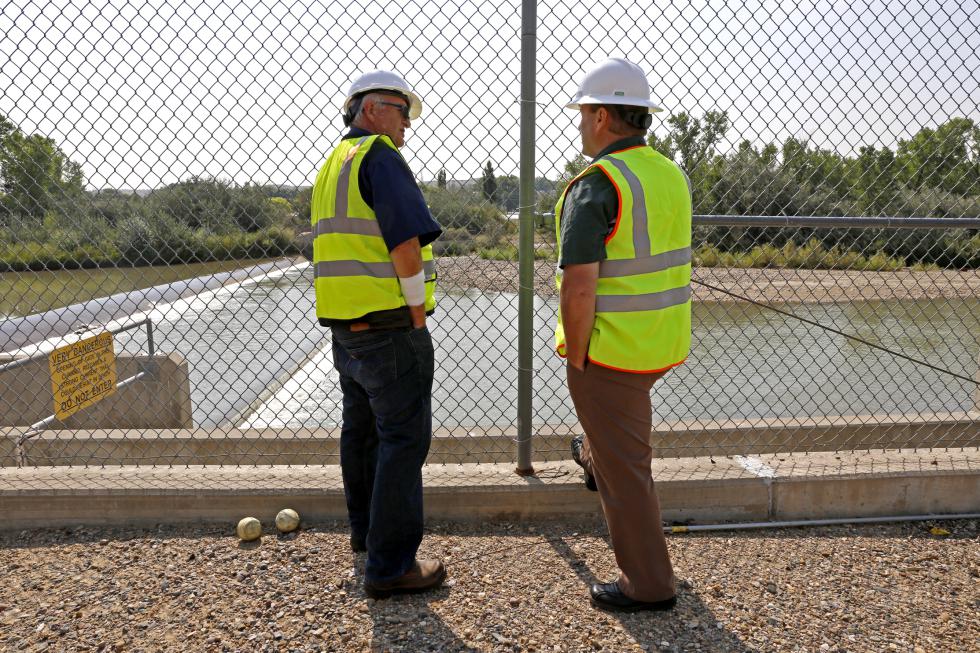 Bob Fredriksen, left, CH2M water operations manager, and David Sypher, public works director, look at the water pumping, Thursday, Aug. 20, 2015, at the Animas Pump Station No. 2 in Flora Vista, N.M. The quality of San Juan River water on the Navajo Nation has returned to what it was before a spill at a Colorado gold mine sent toxic sludge into the waterway, federal officials said Thursday. (Alexa Rogals/The Daily Times via AP) MANDATORY CREDIT

Washington — U.S. officials knew of the potential for a catastrophic “blowout” of toxic wastewater from an inactive gold mine, yet appeared to have only a cursory plan to deal with such an event when government contractors triggered a 3 million gallon spill, according to internal documents released by the Environmental Protection Agency.

The EPA released the documents late Friday following weeks of prodding from The Associated Press and other media organizations.

The Aug. 5 spill came as workers excavated the entrance to the idled Gold King Mine near Silverton, Colo., accidentally unleashing a torrent of pent-up, toxic water that fouled rivers in three states.

Among the documents is a June 2014 work order for a planned cleanup that noted the old mine had not been accessible since 1995, when the entrance partially collapsed.

“This condition has likely caused impounding of water behind the collapse,” the report says. “Conditions may exist that could result in a blowout of the blockages and cause a release of large volumes of contaminated mine waters and sediment from inside the mine, which contain concentrated heavy metals.”

A May 2015 action plan for the mine also noted the potential for a blowout. The plan was produced by Environmental Restoration LLC, a private contractor working for the EPA.

It was not clear what, if any, additional precautions were taken to prepare for such a release. EPA spokeswoman Melissa Harrison said Saturday she could not immediately answer questions about the matter.

A 71-page safety plan for the site included only a few lines describing steps to be taken in the event of a spill: Locate the source and stop the flow if it could be done safely, begin containment and recovery of the spilled materials, and alert downstream sanitary districts and drinking water systems as needed.

There are at least three ongoing investigations into exactly how EPA workers triggered the disaster, which tainted rivers in Colorado, New Mexico and Utah with lead, arsenic, thallium and other heavy metals that can cause health problems and harm aquatic life. The toxic plume travelled roughly 300 miles to Lake Powell on the Arizona-Utah border.

The EPA says its water testing has shown contamination levels returning to pre-spill levels, though experts warn the heavy metals have likely sunk and mixed with bottom sediments that could someday be stirred back up.

The documents, which the agency released at about 10:30 p.m., do not include any account of what happened immediately before or after the spill. The wastewater flowed into a tributary of the Animas and San Juan rivers, turning them a sickly yellow-orange color.

Much of the text in the documents released Friday was redacted. Among the items blacked out was the line in the 2013 safety plan specifying whether workers were required to have phones that could work at the remote site, on a mountainside at 11,000 feet in elevation.

Elected officials in affected states and elsewhere have been highly critical of the EPA’s response to the spill. Among the unanswered questions is why it took the agency nearly a day to inform local officials in downstream communities that rely on the rivers for drinking water.

Colorado Attorney General Cynthia Coffman on Saturday berated the EPA for what she called a “late Friday night document dump” and said the redaction of key facts would heighten public suspicions.

U.S. Rep. Lamar Smith, a Texas Republican who chairs the House Science, Space and Technology Committee, said the agency “has an obligation to be more forthcoming” and called for McCarthy to appear before his committee next month.

Harrison said Saturday that the EPA has been inundated with media inquiries and worked diligently to respond to them. All information must go through a legal review, she added, and confidential information must be removed.

“I do not want people to think we put something out late at night to hide something,” she said.

Environmental Restoration posted a brief statement on its website last week confirming its employees were present at the mine when the spill occurred. The company declined to provide more detail, saying that to do so would violate “contractual confidentiality obligations.”

A company dispatcher said no one was available for comment Saturday.

The St. Louis, Missouri, company bills itself as the largest provider of emergency services for the EPA and is the agency’s prime contractor across most of the U.S.

The EPA has not yet provided a copy of its contract with the company. On a March 2015 cost estimate for the work at Gold King released Friday, the agency blacked out all the dollar figures.

The emergency response to the spill has cost the EPA $3.7 million through Thursday, according to the agency.

Toxic water continues to flow out of the mine, although the EPA built a series of ponds so contaminated sediments can settle out before the water enters a nearby creek that feeds into the Animas River.

The agency said more needs to be done to make sure there are no additional reserves of tainted water that could lead to another surge of contamination. That work is ongoing and no timeline has been provided for its completion.