On the Move With Bellhops

Home » Upper Valley Business News » On the Move With Bellhops 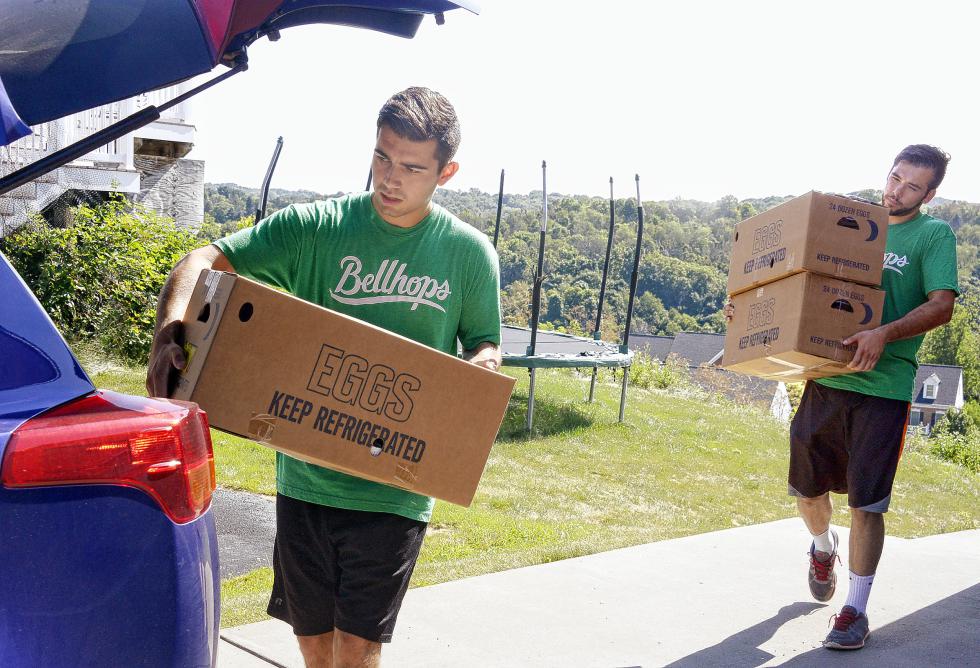 Rob Torres, left, a student at the University of Pittsburgh, and Dimitrije Slavkovic, a Carnegie Mellon University student - both Bellhops employees - carry boxes to help move the Bayer family to their new home on July 30, 2015 in McMurray, Pa. (Darrell Sapp/Pittsburgh Post-Gazette/TNS)

Pittsburgh — When Derek Bayer was getting ready to move, the moving company he hired gave him a quote that included two trucks, which was going to end up costing a lot more than he wanted to pay.

So when he saw a Groupon deal for Bellhops, a service that pairs college students looking to make extra money with people who need a little extra muscle to help them move, he decided to give it a try.

“The guys were very energetic and I’d definitely recommend the service,” Bayer said the day after his move. He used one large truck from the moving company, but relied on Bellhops to supplement the job. “We had two guys, and it went great, made things a lot easier and smoother.”

Moving companies are at their busiest during the summer months, and right now is peak move time with families getting settled in ahead of the school year. Bellhops — yet another entry to the app-based, on-demand economy — is no exception. Which works out well, since its labor force of college students is predisposed to have greater availability during the summer months.

“We started the company to fit the needs of the DIY movers,” Doody said. “For the majority of Americans, hiring a moving company is overkill. No one really likes going through the process of getting a quote, because it can be a big hassle. So you end up relying on family or friends to help.”

Unlike many of its peers in the on-demand economy, Bellhops is not based in Silicon Valley. The company was founded and maintains its headquarters in Chattanooga, Tenn. And its expansion strategy didn’t focus on big cities, but rather on college towns, since that’s where it draws its workforce.

But Doody is perfectly OK with describing the company as “Uber for moving.” Founded in 2012, the company is venture-backed, and Doody said they’ve seen 500 to 600 percent growth year-over-year. They’ve raised $7.8 million in venture capital so far, according to CrunchBase.

They guarantee next-day bookings and fulfill 90 percent of same-day bookings, he added. Much like Uber, movers and customers rate each other. If one of Bellhops’ movers drops below a certain star rating, he could be deactivated.

In order to qualify to be a Bellhop, candidates must be college students with a valid .edu email address. The company performs a background check on every applicant before approving them for service, Doody said.

The pay scale varies by city, he said, but the movers themselves make between $13 and $15 an hour. Moves are a flat rate of $40 per hour.

Since the company is not supplying trucks, it’s not subject to the same regulatory requirements as traditional movers.

Dimitrije Slavkovic, a chemistry and business double major at Carnegie Mellon University, in Pittsburgh was one of the helpers on Bayer’s move. He has a demanding class schedule, even over the summer, when he took three classes and did an unpaid internship. So fitting in a part-time job presented a challenge.

“That’s what I like most about it, is the freedom over your schedule,” said Slavkovic. A friend of a friend recruited him, and he’s been with the company since the beginning of the summer. “It’s always nice when there’s an elevator,” he said with a chuckle, “but even when there isn’t, most people are really nice. They’re always happy to see us.”

If one of Bellhops’ movers damages or breaks something during a move, the company’s insurance can cover the loss for most items. It isn’t insured for larger items like pianos, or high-value specialty items or antiques, according to its website.

Doody acknowledged the service isn’t as gender-diverse as he’d like, with a roster of almost entirely male students. “We are trying to find ways to provide jobs for any college student who qualifies,” he said, “not just student athletes.” Most of the movers now on its roster are athletes, who tend to recruit one another, he said.

Moving is a $25 billion industry, according to the American Moving & Storage Association. Scott Michael, the organization’s president and CEO, cautioned that consumers should vet their options carefully.

“Some consumers are looking for alternatives to a full-service move, but those options may involve working with companies that are not licensed by the government,” Michael said in a statement. “They also may not provide the same consumer protections that are offered to customers of licensed movers.”

Consumers should educate themselves, he said. “It is also a good idea to get some estimates from full-service movers to compare the options and make an informed decision.”

But Doody says the time spent getting a quote is one of the things that Bellhops customers are trying to avoid, and that its ease of service makes it a fit for the on-demand marketplace.

“They can schedule their move online a day before, and we can take care of it for them,” he said. “We take away all of the hassle.”