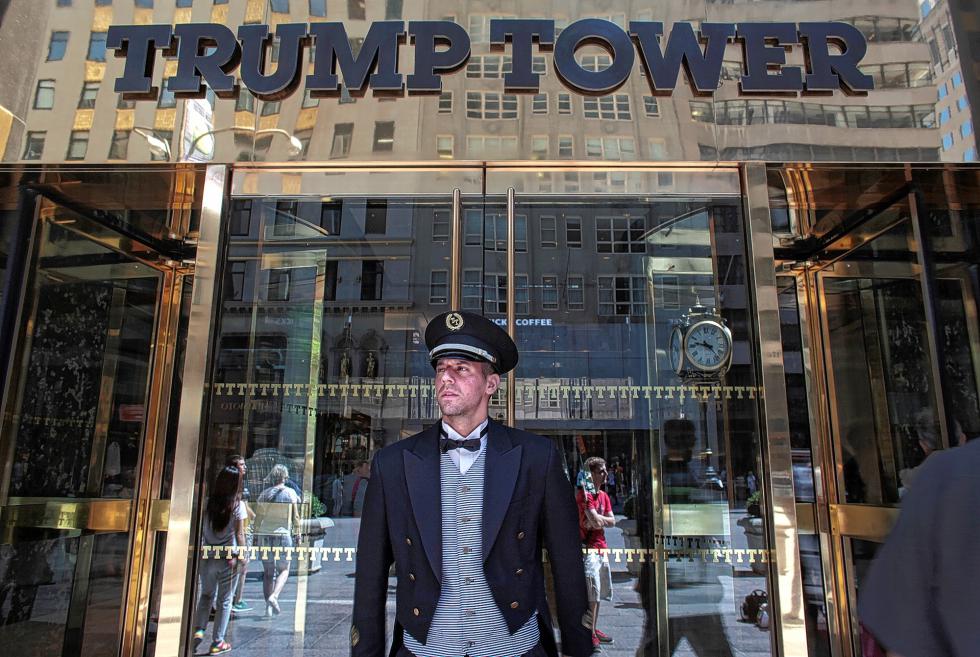 In contrast to his father, Donald Trump has made his name synonymous with luxury properties such as Trump Tower in Manhattan, his first namesake project, finished in 1983. Illustrates TRUMP-DAD (category a), by Emily Badger, (c) 2015, The Washington Post. Moved Monday, August 10, 2015. (MUST CREDIT: Photo by Yana Paskova for The Washington Post.) 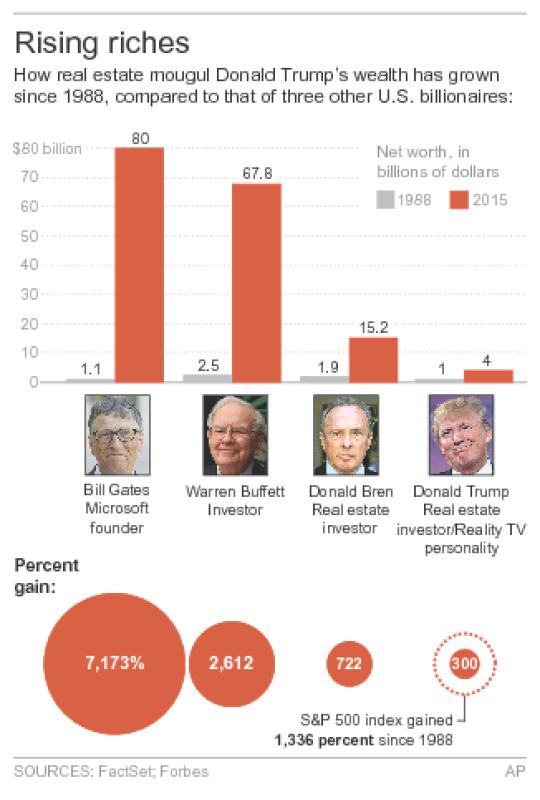 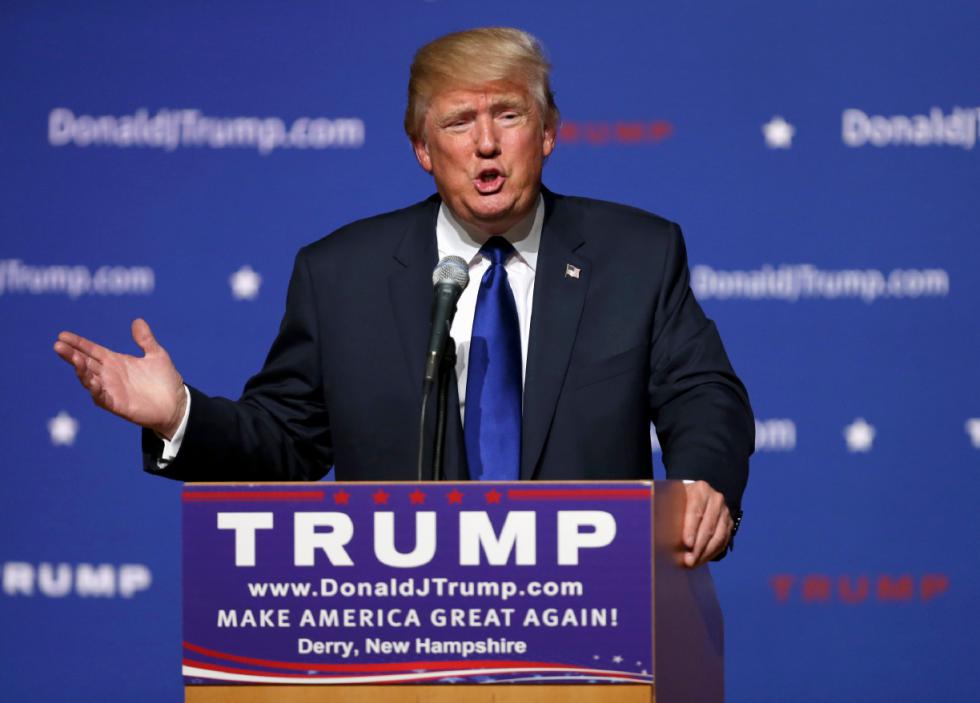 FILE - In this Aug. 19, 2015 file photo, Republican presidential candidate businessman Donald Trump speaks in Derry, N.H. Trump sells himself as a bold empire builder, the kind of businessman who could force through big changes in Washington as president. Yet for all his bravado: Ive done an amazing job, the Republican White House hopeful boasted during his announcement speech _ a review of the billionaires financial filings and recent deals suggests hes no swashbuckler. (AP Photo/Mary Schwalm, File)

New York — Donald Trump sells himself as a bold empire builder, the kind of businessman who could force through big changes in Washington as president.

Yet for all his bravado — “I’ve done an amazing job,” the Republican White House hopeful boasted during his announcement speech — a review of the billionaire’s financial filings and recent deals suggests he’s no swashbuckler.

Trump is reluctant to take on debt after it nearly ruined him in the 1990s. He holds few stocks for someone of his wealth and has grown increasingly dependent on making money by lending out his name to others rather than developing real estate himself.

“People think of him as big. They see the Trump name around the world. But that’s not his money,” says Don Peebles, a real estate developer who oversees a $5 billion real estate portfolio. “He’s not taking big risks.”

That’s not a knock.

Peebles calls Trump a “pioneer,” praising his move into a nearly risk-free business. In the past decade, Trump has struck deals to put his name on at least a dozen properties built and owned by others, including a glass tower reflecting the ocean in Uruguay, a golden-hued skyscraper in Mumbai and a hotel facing the beach in Rio de Janeiro.

In an industry prone to booms and bust, say branding experts and rival developers, it’s a shrewd shift that only someone with Trump’s name recognition could pull off. In essence, Trump gets a stream of fees without risking any of his own money.

Trump is a “genius,” says fellow real estate billionaire Richard LeFrak, adding, “not all of us have the luxury” of getting into such a licensing business.

But it’s not the image that Trump is projecting as a candidate for president, given that his White House campaign is built around his prowess in the boardroom. The candidate’s company, the Trump Organization, rejects any suggestion he’s playing it safe.

“We have been major buyers of properties,” says the candidate’s son, Eric Trump, who oversees real estate development and acquisitions at the Trump Organization. He rattles off several projects, old and new, including a conversion of the Old Post Office in Washington into a hotel and the purchase of several golf resorts. “We believe in owning dirt.”

A few hoteliers had created buzz by putting their names on buildings — think Conrad Hilton of Hilton Hotels — when Donald Trump was getting his start in the 1970s, but the idea hadn’t really caught on in luxury residential real estate. Trump made it work, thanks to unabashed love of glitz and glamour — and some good timing.

He broke ground on New York’s Trump Tower in 1980, just before New York City’s resurgence from near bankruptcy and the start of the longest bull stock market in history. He bought and built more and diversified into airlines and casinos — all with his name leading the way.

Then boom turned bust in the late ’80s, and Trump lost nearly everything. Unable to pay back billions of dollars of debt, he threatened to tie up lenders in court, threw two of his casinos into bankruptcy, cut a series of deals that erased most of his personal liability, then began buying and building once again.

In 2001, he completed the 90-story Trump World Tower, a residential building across from the United Nations in New York.

Three years later, he launched his runaway TV hit The Apprentice and his brand began to take off as a business in and of itself. Today you can buy a myriad of Trump-labeled products, including cologne and cufflinks, men’s suits and furniture and fragrances.

It’s not just an American brand, either. Opening this year is a Trump-branded hotel and residential tower in the shape of a ship’s sail in Baku, Azerbaijan, overlooking the Caspian Sea. Eric Trump says his father strikes deals with local firms overseas because he needs help with the languages, culture and laws, not out of any reluctance to deploy his own cash.

Not all the branding deals have gone smoothly. Condo buyers in failed Trump-named properties in Fort Lauderdale, Florida, and Baja, Mexico, have claimed in lawsuits that the billionaire misled them into believing he was more involved in the projects than just lending his name. Donald Trump won the Fort Lauderdale case and settled the one in Baja.

It’s difficult to know how much risk Donald Trump is taking with his money today, because it’s not clear how much he’s got.

In a recently released list of assets, he estimated his worth at $8.7 billion — more than double the figure calculated by Forbes magazine, which has been tracking his wealth for three decades.

Trump pegged the biggest line item as “real estate licensing deals, brand and branded developments” worth $3.3 billion — or nearly 40 percent of his net worth.

One area where Trump is digging into his own pocket is golf resorts. Last year, he bought Ireland’s Doonbeg club on the Atlantic coast and Scotland’s Turnberry Resort, the site of several British Opens and the 17th course in his collection.

Eric Trump says the golf ventures are doing “fantastically” well. Others aren’t so sure, noting that club membership and play in general have dropped since the financial crisis. “It’s is not a booming business and yet he wants us to believe that his is,” says Ron Whitten, a senior editor at Golf Digest. If Donald Trump is making money on his golf clubs, Whitten says, “he is the only one doing that.”

Trump’s licensing business has taken some hits during his presidential campaign, including disparaging remarks about women and immigrants.

After he said Mexican immigrants bring drugs and crime to the U.S., and some are rapists, several companies including Macy’s, NASCAR, Univision and NBC cut ties with Trump.

But Eric Trump says his father’s run for the White House has helped business more than hurt it. He adds, “Our campaign can’t keep bumper stickers in stock.”

Alan Brew, head of consultancy BrandingBusiness, isn’t sure Trump’s brazen say-what-you-will campaign will prove a winner in politics but suspects it will help his business. “He’s getting free exposure,” he says.