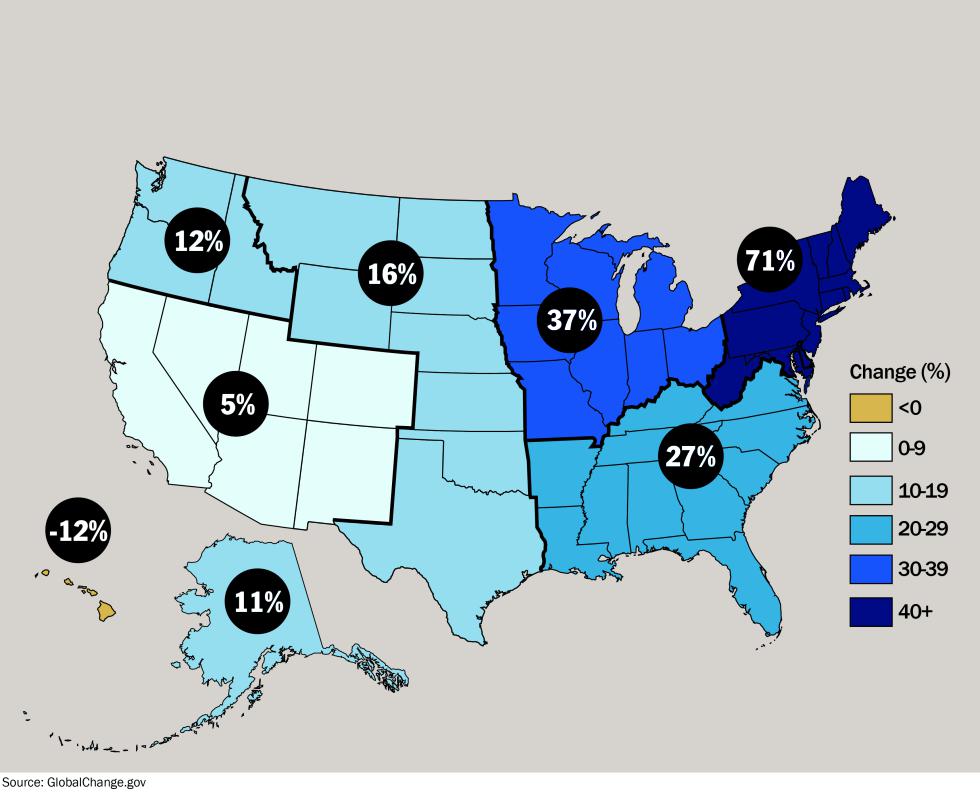 I was standing in my greenhouse two summers ago, planting seeds for fall broccoli, when the water started rising around my feet. First it was just puddles on the greenhouse floor. Soon water covered the whole floor, and within a few minutes, it was ankle deep. By the time it reached mid-shin, I went outside to see what was going on.

I might have gone earlier, but it had been pelting rain all afternoon and I was otherwise dry for the first time in what felt like days. I resigned myself to a soggy raincoat and found that a storm drain up on our driveway had clogged with debris and that the runoff was being diverted across the yard and through the door of our greenhouse. A few minutes with a shovel and order was restored.

Out in our fields, though, we weren’t so lucky: The water flooded several plantings of carrots and fall crops, which never recovered from the mud and silt.

Of all the dangers that our changing climate poses to local agriculture, none is greater than flooding. Whether it’s a named storm like Irene or an isolated cloudburst that wipes out fields and roads in one part of town while leaving adjacent areas unscathed, farmers are adjusting to this new normal. The atmosphere holds 4 percent more moisture now than it did a generation ago, which probably wouldn’t be noticeable if rain fell gently and evenly throughout the months.

But it doesn’t — it often falls in bursts, and those bursts are becoming noticeably stronger.

The 2014 National Climate Assessment Summary notes that, while extreme precipitation events are increasing across the United States, they are increasing here in the Northeast far faster than anywhere else in the country. The heaviest rainfalls now deliver 71 percent more water to us than they did a half-century ago, compared with, say, only a 5 percent increase experienced in the Southwest. The majority of the nation’s storm tracks converge here in the Northeast, bringing together the extreme events from across the country.

What can farmers in the Upper Valley do about this? On the lowest ground, such as that flooded by Irene, move expensive infrastructure (barns, greenhouses) onto higher sites, knowing that the bottom lands are going to be flooded with increased regularity. On the steepest slopes, even hillsides that might have been cultivated for corn or other crops for centuries, plant pasture or hay land so the sod can hold the soil in place during torrential rains.

The micro-details matter, too.

During Irene, our hillside farm was spared major flooding except for a burbling brook that seemingly appeared out of nowhere, where none had ever been before, crossed a pasture and then emptied into our four hoop houses, flooding them to the top of the raised beds.

I’ve since hired an excavator to create a ditch and berm that will divert this brook, whenever it next appears, into an adjacent wetland before it reaches the buildings. I now find myself watching water whenever it rains to see where else I might place a key ditch or berm.

Of course, I’d take an increased flood risk over a crippling California-style drought.

The other great change in our local climate is that it’s getting warmer, especially at night in the winter. In many ways, this is a boon to local farmers: We can plant a wider variety of food crops, especially perennials like peaches and other fruits that are limited by the minimum temperature they can withstand. Our frost-free season also has increased by about 10 days per year over the past half-century, extending the season for vegetables of all kinds. If nothing else, warmer winter nights means less money spent on heating greenhouses and feeding supplemental hay and grain to livestock.

But warmer winter nights also are opening the door to new pests and pathogens whose access used to be blocked by old-fashioned New England winters. Deer ticks come immediately to mind, along with late blight, the fungal scourge of potato and tomato plants that used to arrive in the Upper Valley “late” enough in the growing season to do only minor damage.

Now the fungus overwinters closer to us, in the mid-Atlantic states, and this year arrived in Vermont in July — not late by any standards.

As with rainfall, though, temperature variability is as big a problem as warmer temperatures are. Many of our woody perennials, from apple trees to sugar maples to blueberry bushes, prefer a winter that stays cold once it gets cold and then warms evenly in the spring. An extended winter thaw followed by an arctic blast can crack bark and kill sensitive twigs. It may not kill a tree outright, but it will lead to reduced vigor, and harvest, over time.

What a changing climate means economically for Upper Valley farmers is hard to predict.

Ultimately, though, the economic impact of local climate change will depend, as it so often does, on what happens to the huge farms elsewhere that feed most of the country. If drought in California continues to reduce the supply of fresh produce being grown there and the milk that’s produced both there and in the desert Southwest, the shortage will drive up prices across the country and benefit us smaller producers here at home.

This might not be good news for local consumers, but it will be great for local producers.

If the federal government responds by building vast new irrigation schemes to combat the drought — schemes similar to the ones that made farming in the West viable in the first place — then consumers will benefit from the taxpayers’ assistance while small, local farmers in the Upper Valley will return to the economic margin.

Then again, if the federal government responds to climate change by taxing carbon or limiting its emissions, local agriculture will flourish, since we can compete in local markets without incurring extra transportation costs.

All told, as a local farmer, I’ll take my chances that climate change is going to be a net positive for the Upper Valley farming economy. But that’s the only silver lining I can see on what otherwise is a very dark cloud hanging over the hills and valleys we love so much.