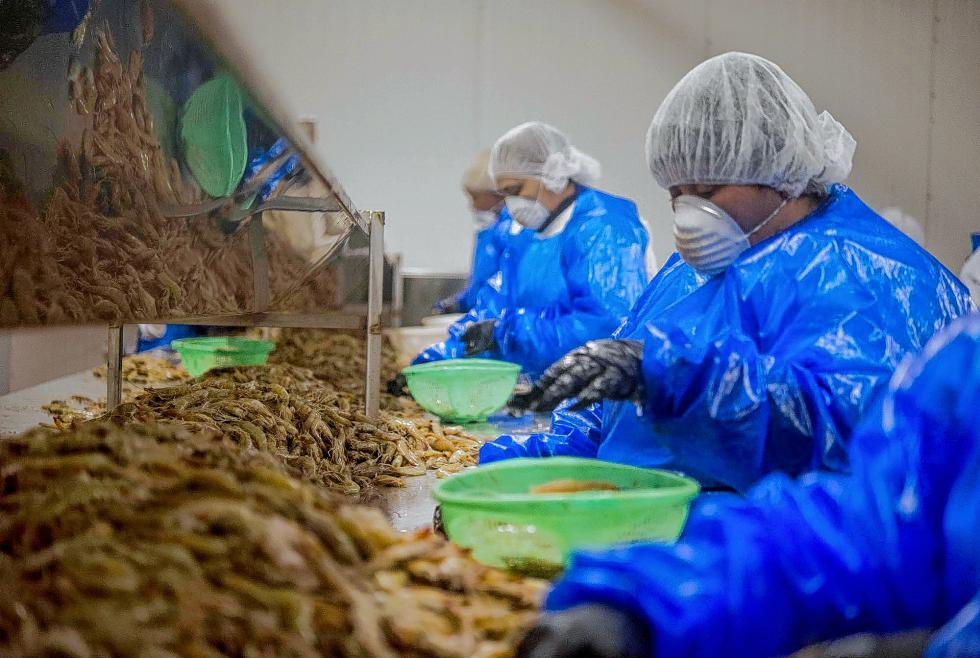 Chicago — The most popular seafood in the U.S. isn’t very American anymore, but it sure is getting cheaper.

A surge of imported shrimp from Indonesia, Ecuador and India has sent prices plunging by more than a third in the past year. While that’s good news for consumers, who eat more of the crustaceans than any aquatic creature, including salmon and tuna, record supplies from foreign shrimp farms is compounding the strain on U.S. fishermen, who have seen their share of the domestic market shrink to about 10 percent.

At Wood’s Fisheries, a Florida processor that sells about 8 million pounds of wild American shrimp a year to grocers including Whole Foods and Wegmans, some frozen stockpiles of brown shrimp from the Gulf of Mexico now fetch $3.50 a pound, or less than half of their cost last year at $7.20. Wood’s is stuck with 1.5 million pounds of that variety, which accounts for a third of its business, said Reese Antley, vice president of operations.

It wasn’t always so bleak for American producers. As recently as two decades ago, shrimp supplies were limited enough to be considered a gourmet food, competing with steak at restaurants. The market changed as aqua-farming technologies improved. U.S. researchers in the 1990s began breeding a pathogen-free white shrimp, a technique adopted in Asia and Latin America that eventually led to an explosion of commercial production.

By the early 2000s, a wave of imports began arriving in the U.S. that turned shrimp into more of a commodity, said David Veal, executive director of the American Shrimp Processors Association in Biloxi, Miss. All-you-can-eat promotions became more common, like Endless Shrimp at Red Lobster restaurants. Global production of farmed white shrimp in 2013 reached 3.3 million metric tons, compared with 92,000 tons in 1990, according to the United Nations Food & Agriculture Organization.

The shift away from fishing boats isn’t unique to shrimp. The world now consumes more fish farmed in lakes and coastal waters — an activity also known as aquaculture — than those caught at sea. While shrimp imports have been growing for years, supplies tightened two years ago when disease wiped out 47 percent of the harvest in Thailand, the world’s biggest exporter. Prices reached all-time highs, encouraging even more production in Indonesia, Ecuador and India.

That increased supply has begun arriving in the U.S. Imports this year through July totaled 316,118 metric tons, an all-time high for that period and 6.1 percent higher than a year earlier, U.S. Department of Agriculture data showed Sept. 3.

“This year, we’ve had so much shrimp,” said Angel Rubio, chief market analyst at research company Urner Barry, which has been tracking food costs since 1858. With global output continuing to rise, “there’s just no way prices are not going to go down,” he said.

Cheaper overseas imports have displaced domestic supplies, which the USDA valued at about $600 million last year. Harvests in the Gulf of Mexico, which account for most of U.S.-sourced shrimp, slumped to 18,316 tons this year through July, down 35 percent from five years ago, according to the National Marine Fisheries Service. U.S. shrimp boats fish mainly between May and December. Fresh shrimp on dinner plates is rare because the flesh turns black within days, even when chilled on ice. They’re mostly frozen after being caught, and can be kept for years if stored in five-pound blocks of ice.

Prices have dropped so much that many domestic fisherman aren’t able to maintain their boats or sustain themselves in the off-season months, according to Clint Guidry, president of the Louisiana Shrimp Association.

“If something doesn’t change and prices don’t rise, fishermen cannot continue to work for these prices,” Guidry said.

Many already have given up, contributing to the slide in domestic output. The number of permits for shrimping boats is down 24 percent since 2007 to 1,470, according to National Marine Fisheries Service data.