Picaboo, I See a New … Yearbook 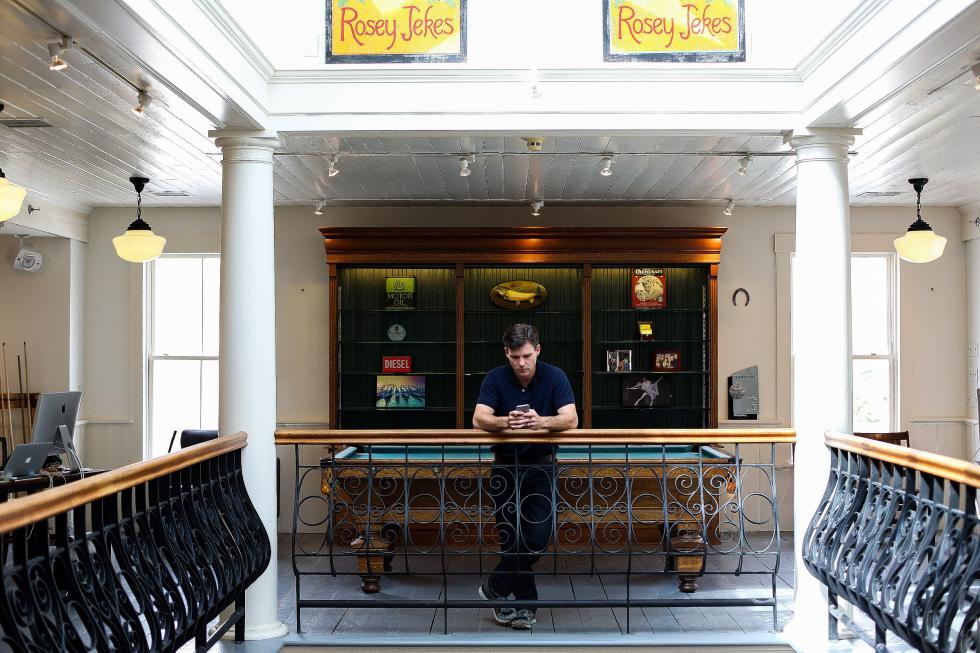 Kevin McCurdy, CEO of Picaboo, co-founded the company in 2002 with Howard Field. The company, headquartered in Redwood City, Calif., recently moved some of their operations to Hanover, N.H., in offices located inside of the Rosey Jekes building. (Valley News - Kristen Zeis) <p><i>Copyright Â© Valley News. May not be reprinted or used online without permission. Send requests to permission@vnews.com.</i></p> 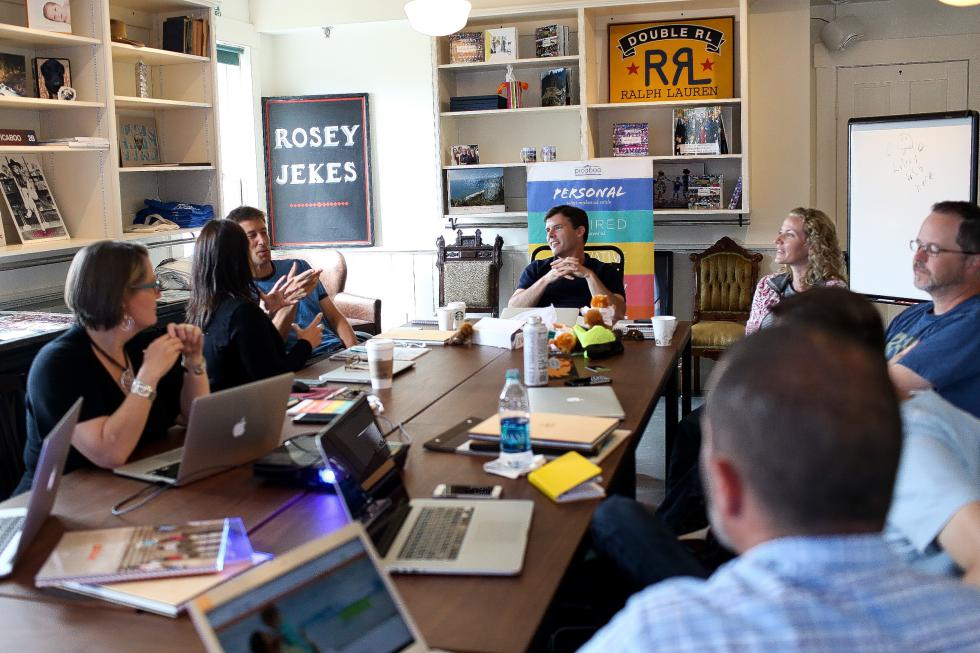 Picaboo employees have a meeting at their Hanover, N.H., office located inside of the Rosey Jekes building with CEO, Kevin McCurdy, on Wednesday, August 26, 2015. (Valley News - Kristen Zeis) <p><i>Copyright Â© Valley News. May not be reprinted or used online without permission. Send requests to permission@vnews.com.</i></p> 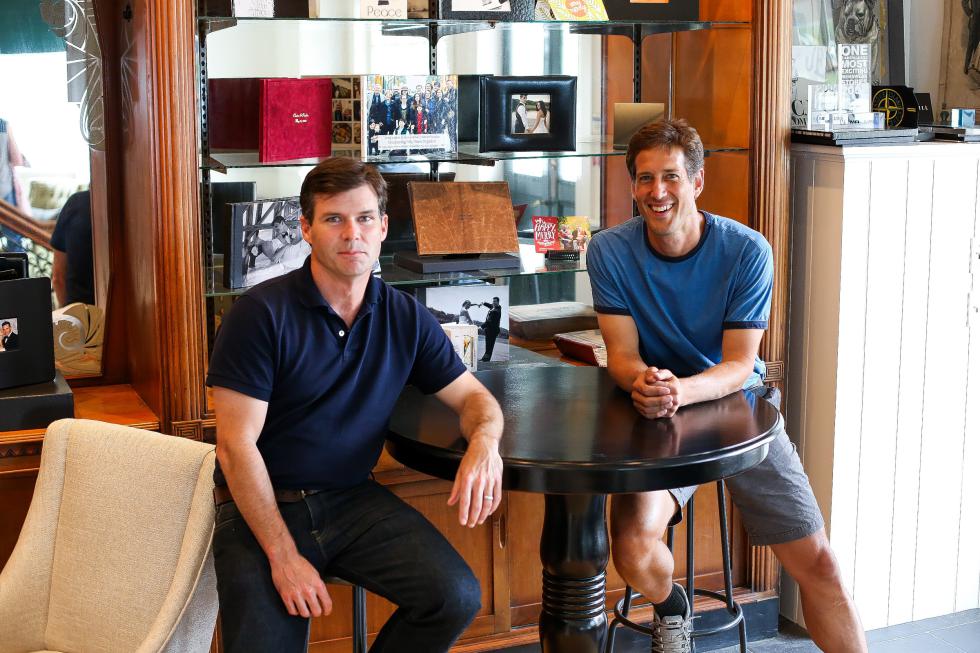 Kevin McCurdy, Picaboo CEO, and Bill Miles, Picaboo COO, in Hanover, N.H., on Wednesday, August 26, 2015. Picaboo is an online publishing service that allows users to upload their images and create items such as albums, cards and calendars. Recently, the company moved some of their operations to Hanover, N.H., inside of the Rosey Jekes building. (Valley News - Kristen Zeis) <p><i>Copyright Â© Valley News. May not be reprinted or used online without permission. Send requests to permission@vnews.com.</i></p>

The quaint exterior belies the tech-savvy activity occurring inside to upend a hidebound industry.

A Silicon Valley firm has relocated to Hanover and moved into the 128-year old Rosey Jekes building — no sign advertises the new tenant — that was formerly occupied by the retail boutique of the same name. The firm, Picaboo, launched in 2002 with an online application that enables users to design custom paper-bound photo books from digital pictures. Picaboo survived the subsequent shakeout among online photo book makers and went on to sell more than 2 million books to 1 million customers.

Despite the shift to smartphones and digital photography, which drove the photographic industry giant Kodak into bankruptcy, the preservation and organization of images, especially ones that mark life passages, on paper remains a strong desire among consumers, said Kevin McCurdy, chief executive and co-founder of Picaboo.

“Facebook, Flickr, Instagram, iPad — all these technologies came along that people thought would be a substitute for photographs and memorabilia,” McCurdy said. “But people value simplicity and accessibility. Paper is simple and accessible for preserving memories, and gets your attention. I’ve never thought of digital photo sharing as a substitute for that.”

Now the 50-employee company — 10 of whom work in the Rosey Jekes building — is adapting its online photo book application to the high school and college yearbook market, an old-school industry that continues to operate much the way it did half a century ago. Picaboo believes its new high-tech approach to making yearbooks will reverse the 2 percent to 3 percent annual decline in sales the industry has been experiencing. At the same time, Picaboo hopes to grab a chunk of the $1.5 billion market long controlled by a handful of companies.

“We figured out how to use cloud-based software that makes it easier for consumers to be creative,” McCurdy said. “We are leveraging that expertise for the yearbook industry, which operates in the 19th century in more ways than one.”

In other words, an industry ripe for “disruption,” as tech vanguards like to say.

Most yearbooks are still produced by a labor-intensive offset printing process involving film, plates and rollers, a technology that dates back to the late 1800s and early 1900s.

Yearbook publishers typically require schools to submit their yearbook prototype 90 days before publication, which means photos of such year-end events as spring sports, senior prom and graduation can’t be included in time for May and June yearbook distribution. Post-deadline fixes are costly, and most publishers require set pre-orders up to 12 months in advance that leave schools holding the bag for unsold yearbooks.

A big reason behind declining yearbook sales is the long-lead time in production that leaves out photos for one third of the school year, making them dated for the Generation Z student who is Snapchatting and Instagraming all day, said Bill Miles, who runs Picaboo’s yearbook division.

“They are less relevant to kids today who are used to instant communications and real-time photos,” he said.

Picaboo contracts with digital printing firms that turn around a yearbook order in three weeks. There is no minimum number of pre-ordered copies required. The result is a more timely and lower-cost yearbook that captures the entire school year, which is reviving interest among students, according to Picaboo.

When Picaboo began to look at expanding beyond its original consumer photo book business, it weighed several possibilities: the wedding market, the adoption market, and the youth sports market. All three involve deeply personal events in people’s lives that they document on their smartphones and for which preserving the memories in a paper-bound format is suitable.

Before entering the school yearbook market, Picaboo turned to nearby students to do a business analysis.

A group of a half-dozen first-year students at the Tuck School of Business at Dartmouth College was given the assignment to analyze the best market opportunity for Picaboo. The school yearbook market with its outdated technology emerged as a clear favorite.

The Tuck students weren’t alone in their conclusion.

“The yearbook market is on the cusp of a major technological transformation,” said market research firm InfoTrends in a 2013 report written shortly after Picaboo launched its yearbook business. “The ability to produce yearbooks through digital workflows and print them on digital printing devices is beginning to disrupt and displace old-school models that are no longer making the grade.”

Picaboo is specifically targeting the middle-tier market, where schools place yearbook orders totaling between $5,000 to $25,000. There are about 120,000 K-12 schools in the U.S., according to Picaboo; the high-value accounts valued at above $25,000 are more difficult to dislodge from their traditional suppliers because the larger yearbook makers are in related businesses, such as class rings and cap and gown regalia.

Picaboo’s strategy appears to be catching on with schools.

Eventually, McCurdy expects the yearbook business will “absolutely eclipse our consumer business, but (we) just don’t know how long it will take.”

Teeing Up an Idea

The impetus for Picaboo began at the sixth hole at the Stanford University Golf Course.

In 2002, McCurdy and Howard Field, who had been friends since their days together at the business-studies oriented Babson College in Massachusetts, were already a couple of successful young entrepreneurs.

The two had previously teamed up in 1995 to launch bamboo.com, a pioneer in 360-degree imaging technology that later merged with IPIX in a deal valued at $1 billion and that was adopted by the real estate industry for “virtual tours” of online home listings. The former partners went their separate ways after the sale — Field stayed with IPIX while McCurdy went on to launch Zinio Systems, a platform to deliver digital editions of magazines — but they reunited on the Stanford, Calif., course and fell into discussing their future.

“The rest of our lives were open books,” he said. “There was an opportunity to do something that really mattered,” which led them to ask themselves “what had meaning?”

“One of them was memories,” McCurdy recalled, which he called “a fundamental part of human experience.”

At the same time, in the early 2000s, digital cameras and digital photography were starting to become popular, dramatically changing the ease with which people recorded their lives and experiences — no more waiting for a packet of prints to come back from the Fotomat.

But the technology was cumbersome, McCurdy said. “What we identified was the pain in transferring digital photos,” he said. “You could order prints from Shutterfly … then the prints go into a shoebox until you’re ready to make an album out of them. But once people had their photos on the computer, it would make it easier to be creative and make a photo album.”

McCurdy and Field opened a small office in Palo Alto, Calif. — to win the space they had to give a piece of equity in their company to the landlord. The office, located in a downtown incubator called The Magic Building, was also the home for such startup successes as PayPal and LogiTech.

“I’m not greatly superstitious, but there is something about good karma,” McCurdy said.

He and Field hired programmers to design the software and raised $18 million through two rounds of venture capital. The barrier to entry is relatively low: There are no plant or infrastructure costs and the capital expenditure goes largely toward software development. Fulfillment, printing and delivery of the photo books is contracted out to digital printing companies and other firms. Many of Picaboo’s staff members are dispersed around the country: The 12-person engineering staff lives and works in low-cost Boise, Idaho, a growing mecca for coders. Field remains in California and is executive chairman of the company.

By 2012, after operating for 10 years, Picaboo was profitable. The company could have been in the black sooner, but “our focus has been on revenue growth and market share,” McCurdy said.

Given McCurdy’s and Field’s track record of launching and selling companies, it is natural to wonder if they have the same game plan for Picaboo.

McCurdy acknowledges that is always a possibility, although there are no plans to sell Picaboo.

“We have venture capital investors,” he said. “As an entrepreneur, you’re singing up for an exit strategy at some point. It’s really a question of when is the right time. Having said that, there is no particular rush.”

McCurdy himself moved east to Hanover five years ago because of family ties.

With consumer photo books and school yearbooks firmly established as the two components of Picaboo’s business, McCurdy and Field are now weighing expanding their concept into adjacent corners of the school market: fundraising (a school buys a gift certificate for a photo book and resells it at higher price) along with so-called “group books” for sports teams, band and clubs, for example.

Picaboo has even enlisted its first Upper Valley school as a yearbook customer: The Ray School in Hanover has contracted with Picaboo for its 2015-2016 yearbook. McCurdy’s 10-year-old twins, a boy and girl, are students at the Ray School.

And the yearbook adviser? Kevin McCurdy.