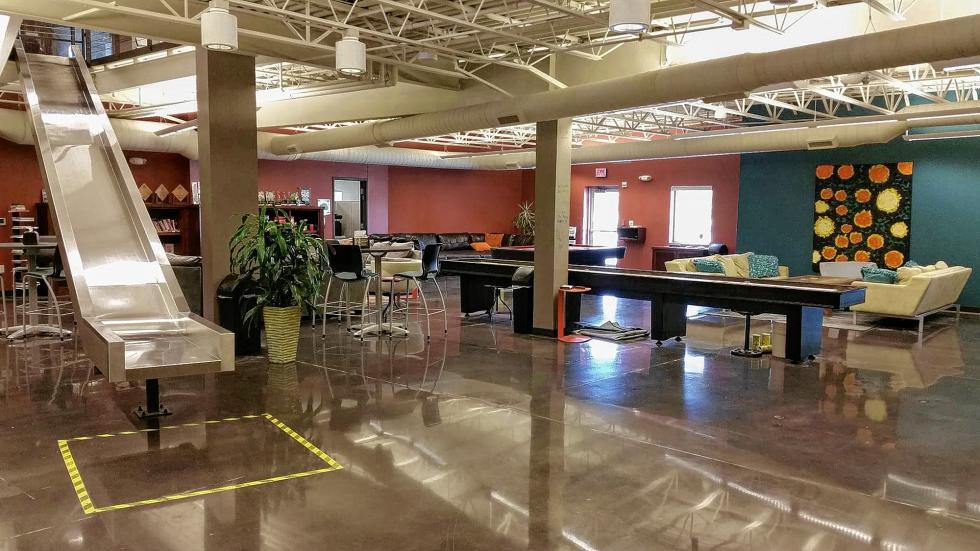 With Silicon Valley becoming too pricey for startups, Startups are spreading dollars and a coastal ethos to unlikely destinations such as the Midwests Silicon Prairie. Shown, headquarters of startup Firespring in Lincoln, Nebraska, which is eminently more affordable than the West Coast. Illustrates TECH-MIDWEST (category f) by Prashant Gopal © 2015, Bloomberg News. Moved Thursday, September 24, 2015. (MUST CREDIT: Firespring).

Michael Hollman says he has a job offer from Amazon.com and just interviewed at Google. But he might ditch them both for Lincoln, Neb.

Hudl, a startup that provides video tools for coaches and athletes, is offering the University of Nebraska senior a chance to become a hometown hero. It’s raised more than $72 million and boasts a location that’s ridiculously more affordable than the pricey precincts that neighbor Amazon headquarters.

“Compared to Seattle, here is dirt-cheap awesome,” said Hollman, an intern for Hudl, where employee perks include free sports tickets (with travel stipends), catered lunches and an “unlimited vacation” policy. “In my mind, working at Amazon is on par with working here at Hudl.”

High prices on the West Coast are making it easier for the fresh crop of computer-science graduates and other techies to choose heartland hubs that are growing, in part, because putting down roots there doesn’t require a small fortune. The influx of tech money has already jacked up the cost of living in Seattle and Northern California, but while Silicon Valley remains the undisputed leader, startups are spreading dollars and a coastal ethos to unlikely destinations such as Provo, Utah, Chattanooga, Tenn., and the Midwest’s “Silicon Prairie.”

Hudl tech workers based in Lincoln earn an average of $67,000 a year, about 60 percent more than the city’s average wage. The average tech salary in Seattle last year was $99,423, according to research firm Dice. But the median home price in Seattle is $385,300 and in Lincoln it’s $158,700, according to the National Association of Realtors.

The tech echo-boom is already starting to hipsterize Nebraska’s capital city. The downtown now has three sushi restaurants, a speakeasy serving $12 cocktails and dozens of startups filling once-abandoned warehouses. New workers are pushing up real estate values. Home prices are up almost 14 percent since 2012 and apartment rents have risen 38 percent.

“The sheer scale of the tech boom is really straining the primary hubs and ratcheting up the pressure to move outwards,” said Mark Muro, a senior fellow at the Metropolitan Policy Program at the Brookings Institution. “It’s having cascading real estate effects.”

While San Francisco and Seattle still rule the industry — and remain totally cool places to live and work — companies are increasingly moving operations where talent is cheaper and easier to retain. The fastest-growing states for technology jobs in the first half of the year were Minnesota, Utah, Nebraska and Michigan, according to a Dice.com analysis of Bureau of Labor Statistics data. New York was seventh and California ranked 10th.

Steve Case, the co-founder of AOL, is now chief executive officer of Revolution, a venture capital firm that plans to invest most of the $1 billion it manages in startups outside Silicon Valley. He’s fielding pitches on his Rise of the Rest bus tour, with stops this fall in Buffalo, N.Y, Manchester, N.H., Portland, Maine, Baltimore and Philadelphia.

“What some people on the coast refer to negatively as fly- over country is going to be the epicenter of the next wave of innovation,” Case said in a phone interview.

Nowhere is this more evident in Lincoln, which from the inside of some offices could be mistaken for Palo Alto. Firespring, a software company for non-profit organizations, gives its 260 employees access to pool tables, subsidized massages, a beer keg and a giant slide that workers take to the daily 11:11 a.m. meeting that lasts exactly 11 minutes. The point is to create a dynamic work environment that keeps 20- somethings interested, founder Jay Wilkinson, 49, said.

David Chait, 30, who co-founded the group-travel app Travefy, moved from Manhattan’s Upper West Side in search of an affordable place to build a business and a family.

Chait now shares a 1,700-square-foot townhouse with his wife and daughter. It costs $1,500 a month, half of what he paid for his New York apartment, where it was impossible to both sit on the couch and open the folding table.

“For Lincoln, we live in an expensive place, but we still have New York goggles on, so we say, ‘What a deal,’” Chait said.

The geographic diversity of new tech companies is reflected in the products they’re spinning out. Lincoln-based Quantified Ag, in the heart of farm country, is producing wireless ear tags that work like fitbits for cows, allowing feedlot owners to monitor the health of individual animals.

Ajay Agrawal, a professor of entrepreneurship at the University of Toronto, said only time will tell whether the heartland startup boom is real or just a mirage created by local economic development subsidies.

“Government support can sometimes provide the necessary spark to get companies going,” Agrawal said. “But at some point they’ll need to be real self-sustaining companies.”

Hudl, which has 360 employees and offices in Boston and 14 countries, has plans for a new $32 million, seven-story headquarters in Lincoln that’s receiving $6.6 million in tax subsidies. It’s part of the redevelopment of the Haymarket warehouse district, a former rail yard that now includes an entertainment district, a 15,200-seat arena and a small but growing number of condominiums. It’s also where many startups, inspired by Hudl’s success, are clustering.

“To be a big fish in California you need to be an Airbnb or an Uber,” said John Wirtz, 33, who founded the company with two University of Nebraska classmates. “Here an earlier stage company can be that and attract the resources from the city and really be top of mind for the city’s best talent.”

A few blocks from the Haymarket is Bulu Box, a health- supplement subscription service that founders Paul and Stephanie Jarrett moved from their 500-square-foot San Francisco apartment in early 2013.

“In 2015, you don’t have to be in a big city,” said Paul Jarrett, who grew up in Lincoln. “You have to have a central location and blazingly fast Internet speeds.”

Of the 30 students who graduate each year from the University of Nebraska’s Jeffrey S. Raikes School of Computer Science and Management, half now stay in Nebraska, director David Keck said. Hollman, the Hudl intern, said he’s waiting to hear back from Google before he decides whether he’ll be a roamer or a homer.

“Any software engineering salary, even starting level out of college, will be plenty to live OK just about anywhere,” Hollman said. “It’s just a matter if you want to live in a small apartment with the bare essentials, or live in a nice condo with a big TV and nice alcohol every week.”