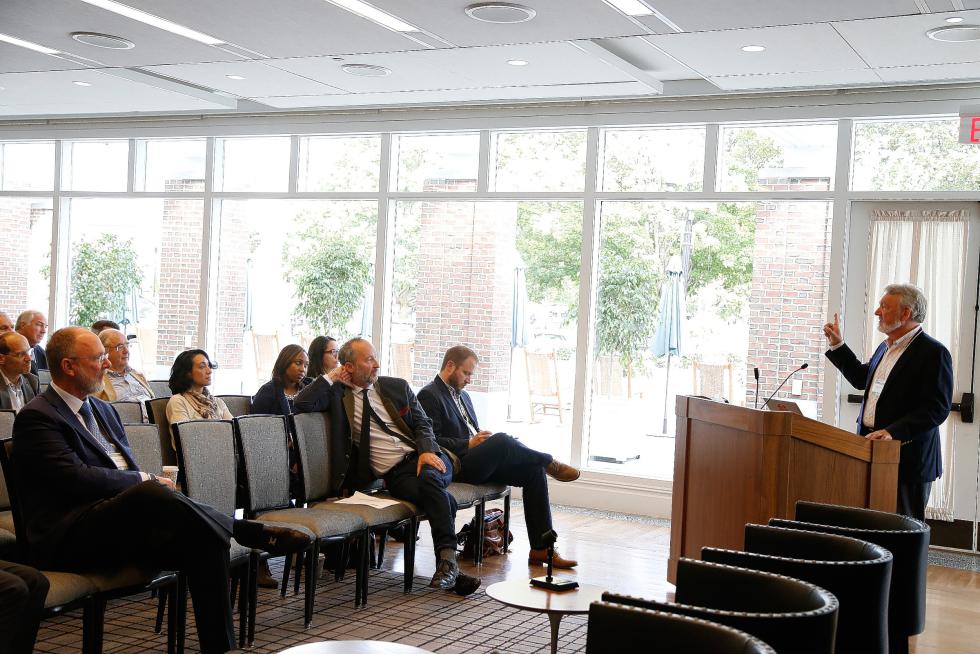 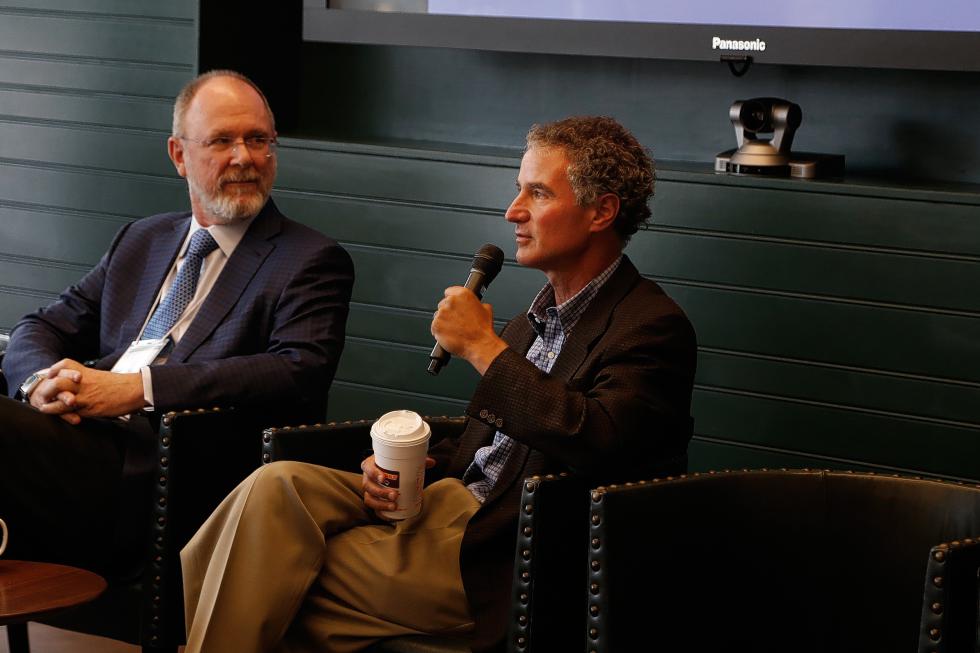 Joshua Boger, founder of Vertex Pharmaceuticals, listens to Peter Hecht, founder of Ironwood Pharmaceuticals answer a question about the importance of bringing more biotechnology business to the Upper Valley during a panel moderated by David Clem of Lyme Properties at the Dartmouth Life Sciences and Entrepreneurship Symposium in Hanover, N.H., on September 25, 2015. (Valley News - Sarah Priestap) <p><i>Copyright © Valley News. May not be reprinted or used online without permission. Send requests to permission@vnews.com.</i></p> 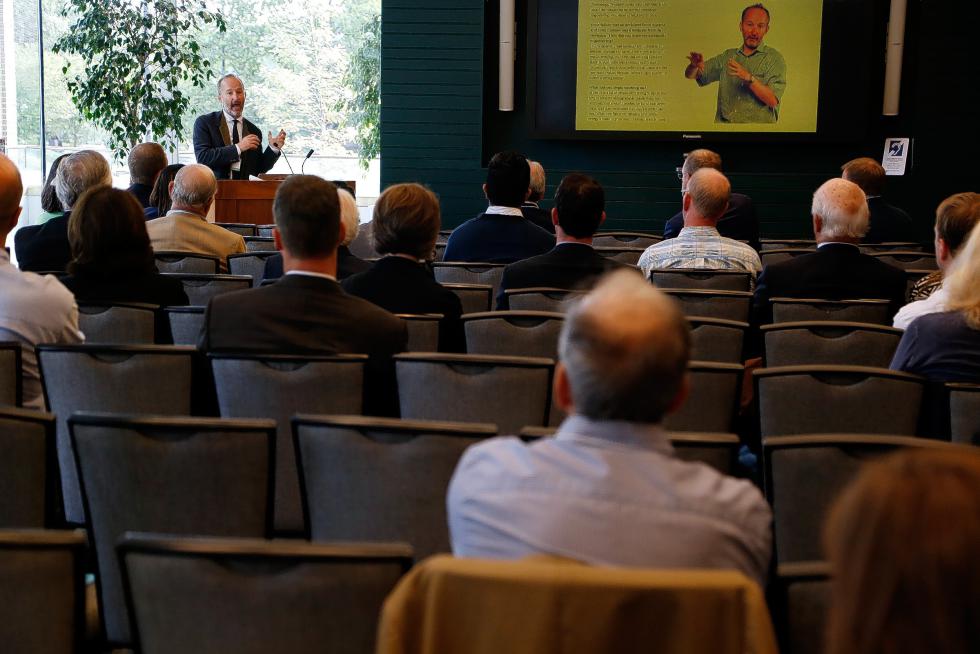 Tillman Gerngross, associate provost at Dartmouth College explains the frustration of finding proper research office space in an affordable area during his introductory remarks at the Dartmouth Life Sciences and Entrepreneurship Symposium at the Hanover Inn in Hanover, N.H., on September 25, 2015. (Valley News - Sarah Priestap) <p><i>Copyright © Valley News. May not be reprinted or used online without permission. Send requests to permission@vnews.com.</i></p>

Hanover — High-tech entrepreneurs tend to cluster in locations where there is a large supply of highly educated scientists and researchers: Research Triangle Park in North Carolina, Cambridge, Mass., and Silicon Valley in California. Those places have among the highest concentration of biotech and info-tech startups on the planet, and their presence has turned once-sleepy communities into economic powerhouses.

If David Clem’s convictions turn out to be correct, the Upper Valley is positioned to become a mini magnet for life-sciences entrepreneurs — and without the congested freeways and stress that comes with living and working in densely populated urban environments.

Clem, a commercial real estate developer whose mixed-use River Park development in West Lebanon, which broke ground last week, eventually will include 550,000 square feet of space for life -s cience research companies, said he believes there is a strong enough base of scientists and researchers affiliated with Dartmouth College and its graduate schools in medicine, engineering and business to act as a catalyst to draw other early-stage life-science ventures to the Upper Valley.

“We won’t ever be a Cambridge,” he acknowledged to a group of students, professors and entrepreneurs during a symposium on Friday in Hanover on developing a “life -s cience research cluster” in the Upper Valley. “But we don’t have to be a Cambridge.” The goal, instead, is more modest but no less important for the area’s economy: “How to take advantage of ideas coming out of (an) elite institution … to take what is already in the Upper Valley and create what is good for these communities.”

The symposium, organized by Clem’s Lyme Properties development company and the Dartmouth Entrepreneurial Network, brought together founders of pharmaceutical startups in Cambridge and some entrepreneurial-minded members from the faculty of Dartmouth’s Geisel School of Medicine to discuss the advantages and pitfalls of starting a biotech company. The nearly day-long meeting at the Hanover Inn was part informational session, part reality check — the odds of discovering a hit drug that will improve the lives of millions of people are long — and part sales pitch for the Upper Valley and River Park.

Tillman Gerngross, associate provost of the Office of Entrepreneurship and Technology transfer at Dartmouth whose work has led to the launch of biotech firms GlycoFi and Adimab, pointed out that over the past six years, more than $250 million in capital has been raised for ventures that originated from Dartmouth faculty members and that led to businesses with an “enterprise value” of $3 billion and the creation of 1,600 jobs.

Gerngross said the first two questions that entrepreneurs ask themselves are: “Can I build a company?” which is quickly followed by, “Do I have space I can move into?” The answer to the latter for those in the Dartmouth community has usually been “no,” in which case the decision is “move to Cambridge.” That often led to a situation where “good ideas originate here and end up somewhere else,” he said.

Still, there are now 18 different life -s cience firms clustered in the Hanover and Lebanon area, according to Jamie Coughlin, director of the DEN Innovation Center at Dartmouth, and they can become a key draw for other entrepreneurs when deciding where to locate. The clustering of high-tech startups is a beneficial strategy because the ideas that lead to solutions and products are frequently generated through an informal collaborat ive process that happens when people are located in the same place and with easy access to one another.

That sentiment was echoed by Joshua Boger, founder of Vertex Pharmaceuticals, a Boston-based company that has developed treatments for cystic fibrosis.

Nor are cities like Cambridge, where the cost of housing is out of reach for most young researchers, or San Francisco with its transportation problems, necessarily an optimal location for start u ps despite their vaunted status. He suggests those interested in starting their own company weigh lifestyle factors that affect workforce happiness. When it came to locating offices and labs for Vertex in the early 1990s, Boger said, he chose Clem’s Kendall Square project in Cambridge, which had been developed a few years earlier on a former industrial site and had not yet become the hub housing 38 life -s ciences ventures that it is today.

The reason Boger chose it was that even though the city of Cambridge and Harvard University were known at the time as not the most hospitable places for business, the costs and amenities were nonetheless favorable. “It was a social decision, rather than a tech decision,” he said.

Apart from the typical question about the availability of “talent,” Boger said, other questions the entrepreneur should ask are: “Is there a community? A welcoming atmosphere? Are there resources? Is there enough attention to the human element?”

“You seem to have that here” in the Upper Valley, Boger said.

Peter Hecht, founder of Ironwood Pharmaceuticals, a Cambridge-based firm that has developed a treatment for irritable bowel syndrome in adults, went even f ur ther in assessing the Upper Valley for a life science start u p. “I would definitely start a company here,” he said.

Hecht acknowledged that would not have been the case back in the late 1990s, when he and three “post-doc” colleagues started Ironwood and his wife was teaching at Middlebury College. The Upper Valley at the time did not have the “critical mass” of researchers and facilities to support a high-risk life -s cience venture.

But with the bio medical research, medicine, business and engineering communities that have grown and expanded around Dartmouth’s graduate schools, the situation is different today.