Auto Review: Tacoma Equally Adept, on or off Road 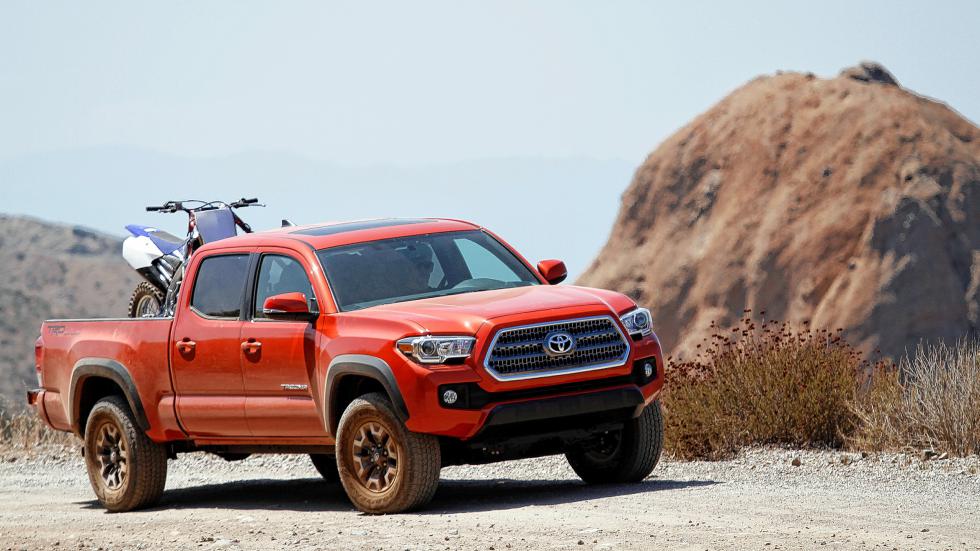 After three days of city and highway driving, I was ready to dismiss the 2016 Toyota Tacoma pickup as a very nice, very tall sedan. One of those citified trucks.

It’s so quiet, cushy and comfortable that it hardly seemed to be a truck at all. The plush seats, lush suspension, refined interior and single-finger steering lulled me into a Barcalounger-like state of relaxation. Floating above traffic, I imagined the best use of this midsize truck might be a drive-in movie. Or a nap.

An afternoon off the pavement convinced me otherwise. With a couple of motorcycles in the bed, and a couple of hundred pounds of equipment in the rear seats, I tested the mettle of the TRD Off-Road Double Cab on some ragged dirt roads and trails.

I was mightily impressed. The Tacoma skipped over the rough patches and potholes, staying comfortable and maintaining a bank-vault sense of secure silence. Even in two-wheel-drive mode, the Tacoma had no difficulty with the uneven surfaces and elevation changes. It plowed through the sandy patches and soaked up the washboard.

When I slipped it into four-wheel-drive mode, and gave it a steep hill, the Tacoma climbed like a cat, mocking the elevation, making a molehill out of a mountain.

Toyota, with this third generation of Tacoma trucks — the first serious revision in 10 years — is offering a wide variety of platforms and option packages. The basic versions of the entry-level SR will sport a 2.7-liter, four-cylinder engine, putting out 159 horsepower and 180 pound-feet of torque, mated to a six-speed manual transmission, at a base manufacturer’s suggested retail price of about $25,000.

The souped-up, dressed-up version we tested had a burlier 3.5-liter, six-cylinder fuel-injected engine. Making 278 horsepower and 265 pound-feet of torque, it featured a smooth six-speed automatic transmission, Billstein high performance shocks and a high-end JBL audio system — bringing the tab to $37,665.

That’s a big price, but this is a big truck — especially considering the Tacoma is technically a “midsized pickup,” in the segment formerly known as “compact.” (I happened to park next to a Tacoma from the 1980s. It looked like a 2016 that someone had washed and left too long in the drier.

Toyota folks say a substantial portion of Tacoma buyers will use the truck for work, and an even larger percentage will use it off-road. Marketing the truck to what they define as a “young, active male” car buyer, Toyota has loaded the new Tacoma with an array of features, many of them firsts in the mid-sized truck segment.

The 2016 Tacomas come standard with a locking tailgate, for example, wireless phone charging, and the keyless, push-button start associated with higher-end vehicles. There’s a back-up camera mounted in the tailgate, and a GoPro mount permanently affixed to the windshield, which Toyota boasts is an industry first. The TRD also has a 120-volt electrical outlet in the truck bed.

“This is kind of like a Swiss Army knife,” said James George, the Tacoma marketing manager.

Owners of previous generations of Tacomas, while making the model the best-selling midsize pickup for more than a decade, had complaints. The interior was too spare, the cabin was too loud, and the truck lacked premium features.

Aware that a new Chevrolet Colorado, GMC Canyon and Nissan Frontier had arrived or were soon hitting the marketplace, George said, Toyota gave the new Tacoma more upmarket features and a stylistic redesign meant to look sportier and more aggressive.

“The interior is more refined, but our internal reference for the exterior is ‘badass styling,’” George said. “That’s a technical term.”

Company engineers paid particular attention to the grumbles about noise and vibration. The 2016 models feature enhanced door and window seals, a multi-layer acoustic windshield, and the increased use of sound-absorbing materials in the headliner and floor pad.

In addition to the cozier cabin and premium features, the Tacoma also has more quotidian comforts. There are several useful cubbies for storing small items in the cabin, and there are 12 cupholders – two in each of the four doors, and two each in the front and rear center consoles, in a vehicle that can seat only five people. Five thirsty people.

That’s unladen, pulling nothing but its own weight, and it may be ambitious.

Babying the truck around town and on the freeway, I was never able to get the in-dash average mileage indicator to show any number above 17.

That probably won’t matter much to the consumer drawn to the Tacoma. Gas prices are stable, and truck sales are rising.

This year, overall truck sales are up 10 percent. But transactions in Tacoma’s class are up 15.8 percent over the period of January to August 2014, according to online auto sales company TrueCar.

That’s partly due to the arrival of new Canyons and Colorados, but segment-leading Tacoma sales are up 18 percent — before the introduction of the new model, which began hitting showrooms in early September.