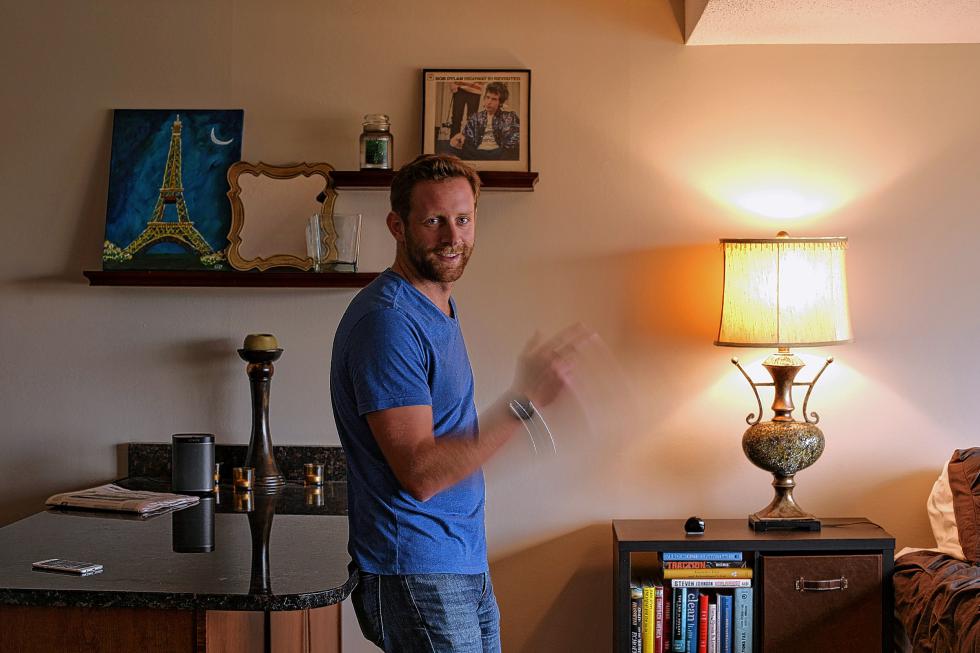 Reemo co-founder and CEO Al Baker demonstrates the simple gesture that when wearing a compatible watch will allow a user to control household appliances such as lights and fans. (Jeff Wheeler/Minneapolis Star Tribune/TNS)

The two created Reemo, formerly Playtabase, to help Abdurrahman’s father live more independently after severe strokes limited his mobility. The mobility impaired have a high cost for every motion — to pick up a remote that’s dropped to the floor is to risk a life-threatening fall, Baker said. Their solution: wearable technology that would control home devices using simple gestures.

Baker and Abdurrahman started Minneapolis-based Reemo in 2012. The company originally was developing its own wrist-worn device to provide basic inputs. Now, the company has largely given up on developing its own hardware, switching efforts to Reemo Engine software that would work on several different smartwatches.

“It’s always available, it’s always mobile, you don’t have to drop it, and you can forget about it if you don’t want it,” Baker said of the Reemo Engine-powered smartwatch he wore to demonstrate its capabilities in his studio apartment.

The system works by downloading an app to a smartphone or tablet that aids in setting up Reemo pods — Bluetooth receivers paired to each controlled device or devices. The app drives users or caregivers through the process of pairing the smartphone with the pod-controlled smart devices. The smartwatch then becomes the easy-to-use input device to turn devices on and off and control other functions through six or seven deliberate motions.

Reemo was a winner in the 2014 AgePower Tech Search competition run by MOJO Minnesota and Ecumen, which operates a variety of senior housing options.

Eric Schubert, Ecumen’s vice president of strategic initiatives, met the Reemo partners during the competition, but before the company was ready to take advantage of the pilot study opportunity that came with the award. He is convinced technology can help people live independently longer and that technologies in development are critical to helping people maintain independence.

“Most older Americans live with chronic conditions and many have frailties that demand help so that they can live independently,” Schubert said. “So you look at there aren’t enough caregivers — the marriage of the human and technical assets are critical.”

Since AgePower, Reemo partners have participated in several accelerator programs.

The Microsoft Ventures accelerator in Redmond, Wash., helped develop their technology. The Wearable World Labs in San Francisco introduced them to partners in wearable technology and Internet of Things space. And they spent time in the Jumpstart Foundry, a health care accelerator in Nashville, Tenn., that helped Reemo with customers.

Reemo has recently found a pilot partner in the Ohio Masonic Home in Springfield, Ohio.

“We chose to partner with Reemo because it offers a compassionate, nonintrusive solution to making our clients’ lives easier,” said Thomas Stofac, CEO of the Ohio Masonic Home. “They (Reemo) are really willing to listen to make their products better.”

Reemo has bootstrapped most of its financing to this point. The partners raised about $480,000 in angel and seed funding and have a Small Business Administration-approved bank loan. They are still looking for their first Series A funding. They remain focused on their end market. To start, the company wants to place its products where providers are on hand.

“We are going to the folks who are paying already for a little bit of managed care. They are at 1,900 bucks a month now, (and) they do not want to go to nursing care, which is $4,400 a month,” Baker said. “They are doing everything they can to stay in this lower to middle bracket.”

Reemo is still a long way from marketplace acceptance and profitability.

“We are definitely still a startup. We’ve got early customer traction, which is the signal that this a venture-ready company, and we have a team behind it,” Baker said. “We are in a very, very strong market with very strong technology and (intellectual property). So we are poised to scale very, very well.”