How the New Chip Cards Work 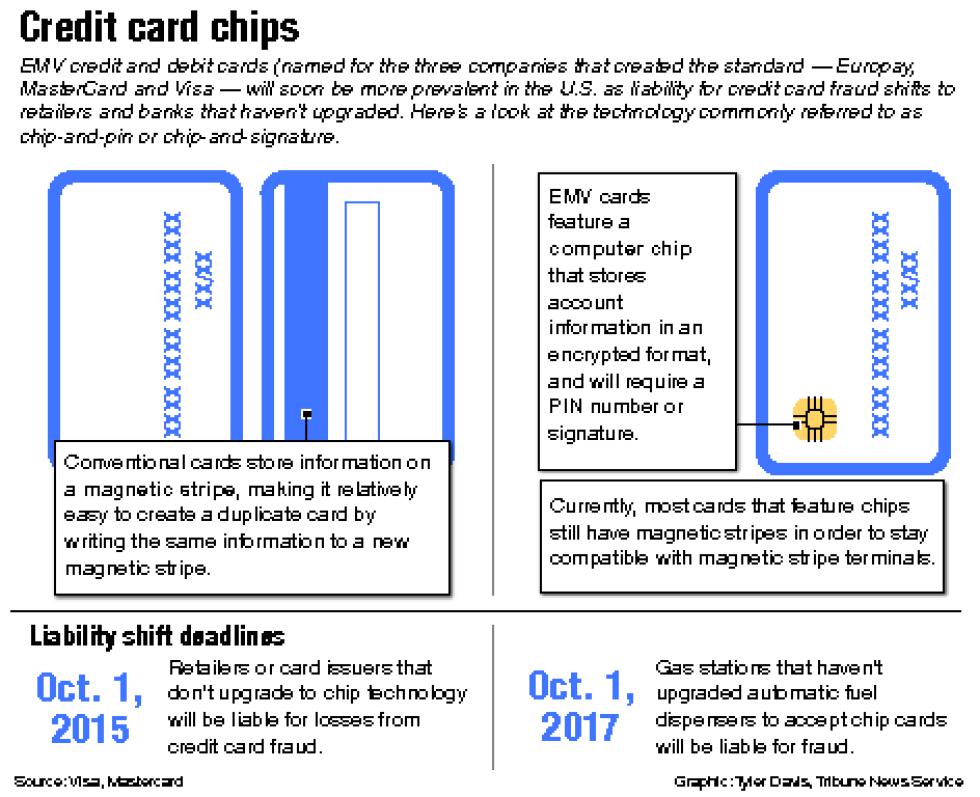 You might have already noticed the minor change at the register.

Instead of swiping credit cards and debit cards, more retailers are asking consumers to dip them into new card readers that are supposed to be more secure. The technology uses cards with chips embedded in them, and is supposed to cut down dramatically on incidents of thieves stealing card information and making fake copies.

Businesses have been installing the new readers slowly, but more might have them up and running by Thursday, the deadline set by major credit card issuers for merchants to have the updated card terminals. Those that don’t have the readers by then could be on the hook for any losses caused by credit card fraud, as opposed to banks being liable, as is the case now.

The transition should be pretty straightforward for consumers, but it can still take a little getting used to. Here’s a rundown of what credit card holders need to know.

■ How do these chip cards work, and what makes them more secure?

Basically, chip cards are credit cards or debit cards with a computer chip embedded in them. Instead of sending retailers and card companies the same information each time they’re used, the way the magnetic stripe on cards works now, the chip sends out a unique code for each transaction. The official name for the technology is EMV, which is short for Europay, MasterCard and Visa.

The idea is that any thief who is able to intercept the code won’t be able to use it again to make a fraudulent purchase with a fake version of the card later on, essentially making it more difficult for someone to go on a shopping spree at a mall in Texas while you are physically in New York. Anyone who would try to use a fake magnetic stripe version of the card at a chip terminal would be prompted to insert the card into the chip slot, said Stephanie Ericksen, vice president of risk products at Visa. The transaction would then fail, she said.

■ So what should I do at the register?

Unless you are told otherwise by the cashier, you should swipe your card as usual. Some terminals will recognize the chip and ask you to dip the card into the slot underneath the key pad, said Deborah Baxley, a principal in Capgemini Financial’s Cards and Payments unit. Swiping is typically a flick of the wrist movement, but when you are using a chip reader, you don’t want to remove the card quickly. You’ll need to leave the card in place for a few seconds until the transaction is complete, Baxley said.

■ Will these cards stop fraud completely?

Unfortunately, thieves are fast learners. As more and more in-store purchases are completed with chip technology, it will get harder for thieves to make fraudulent purchases inside stores. But security experts say they widely expect credit card fraud to move online, where thieves can still use the card number and expiration date to make fraudulent purchases. That’s what happened in Europe when retailers installed the technology there years ago, with online fraud doubling in some countries, said Rurik Bradbury, chief marketing officer for Trustev, a company that helps retailers catch online fraud.

Retailers are moving to catch fraud online by scanning for details, such as a person’s IP address, e-mail address and other data points, but their information is often limited, Bradbury said. Some businesses may rely more on apps or programs such as Apple Pay, which work similarly to chip cards by also creating a unique code for each purchase.

■ I don’t have a chip card yet. Should I be worried?

No. Your older magnetic stripe card should still work at most retailers. And banks are still in the process of sending the new cards out to consumers. Some 57 percent of consumers had at least one chip card as of July, according to a survey by Visa. Some banks are aiming to send them out by the end of the year, but for some cardholders the new cards may not arrive until 2016. Consumers who want to get a new card can call their credit card companies and request one, said Matt Schulz, a senior industry analyst for CreditCards.com.

■ Why haven’t I seen chip readers at more retailers?

After Oct. 1, the date set by issuers, such as Visa and MasterCard, merchants who don’t have the new readers may become liable for fraud that results from stolen data. But don’t expect all stores to have the new readers by tomorrow. About 44 percent of merchants surveyed by Visa said they had installed a chip reader as of July. That percentage will grow over the next several years, but adoption may be slow, especially among smaller stores, whose owners might feel like they can’t afford the new technology. Based on how the transition played out in Europe, Ericksen estimates it may be two to three years before roughly 70 percent of in-store transactions are done using EMV technology.

■ Will people see these special card readers at ATMs and gas pumps?

Eventually. Replacing the readers attached to gas pumps and ATMs is more complicated, so they have more time — until October 2017 — to make the change.