Pour One Out: Self-Serve Bars Are On the Rise

Home » Upper Valley Business News » Pour One Out: Self-Serve Bars Are On the Rise 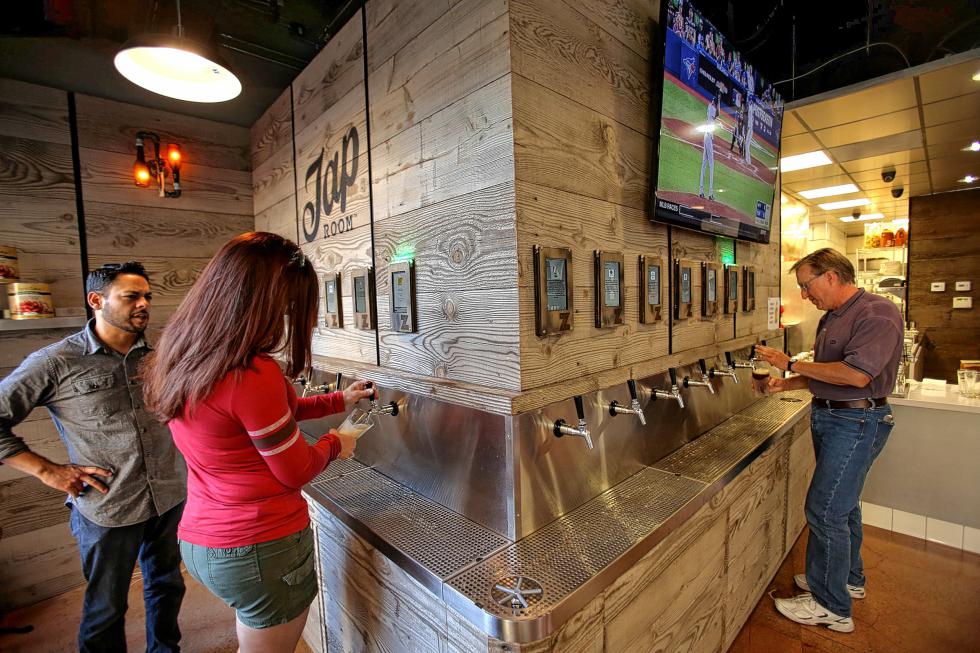 Los Angeles —Your next draft may be pulled not by a bartender — but by you.

A small but growing number of gastropubs and fast-casual restaurants are going self-serve, installing systems that enable drinkers to draw their own taps, similar to the soda fountain at McDonald’s but far more sophisticated.

Establishments in the notoriously low-margin restaurant industry say the technology not only cuts labor costs but also boosts revenue by encouraging customers to sample what can be a bewildering array of Belgian quads, India pale ales or oatmeal stouts on a menu.

The technology has another attraction: It can measure and charge literally by the sip — something not lost on Barrel Republic, a craft beer bar in Oceanside, Calif., and San Diego’s Pacific Beach where there are dozens of craft beers on tap and no bartender.

Sean Hale, general manager of the recently opened Oceanside pub, said customers pay for what would be free samples at traditional pubs while making it simpler to try exotic brews.

“They love it,” he said. “It’s about tasting all these different beers and the fun of exploring.”

Fast-casual sausage joint Dog Haus is on board too. The chain has a four-tap self-serve system at its Santa Ana, Calif., store, and a six-tap one is coming soon to a location near Cal State Fullerton.

Quasim Riaz, the chain’s co-founder, said that with customers charged by the 10th of an ounce, there is less waste. Customers tend to be more careful than a bartender who might be prone to spill, over-pour or give away a beer “on the house,” he said.

Both establishments installed systems from iPourIt, a Santa Ana company that is one of the leading providers of the technology.

Its system, like others, requires drinkers to provide an ID to receive a wireless bracelet or card that enables them to operate the tap. Providers sell table- and wall-mounted systems, along with mobile units for fairs and sporting events.

But some labor is required to ensure that establishments are not selling beer to inebriated customers, which can pose a legal liability. After a customer drinks a certain amount — usually two full beers — an employee has to determine whether they are sober enough for more.

The technology runs about $25,000 for a wall-mounted, 20-tap system, plus a monthly maintenance fee. But if they prove profitable, the systems could become ubiquitous across an industry in which online ordering and reservations already are popular, said Brandon Gerson of restaurant data firm CHD Expert.

“A system like this didn’t even exist 10 years ago,” he said. “I don’t see why they wouldn’t have the potential to become just as standard as a booth.”

It’s unclear how many self-serve beer locations there are nationwide, but McCarthy said iPourIt is in 42 locations in 23 states and two Canadian provinces. Fourteen of those are exclusively self-serve with no bartender.

Josh Goodman of rival PourMyBeer in Wheeling, Ill., which previously sold and installed iPourIt taps, said his company has sold its own self-pour systems to about 80 locations since 2013.

“In a location with 50 taps, you typically have to have around 20 to 30 employees,” Goodman said. “With us, you can easily have 10 and not really be stretched.”

But the traditional bartender isn’t about to go the way of the elevator operator, not just yet anyway.

Tom’s Urban, a gastropub in downtown Los Angeles, offers self-pour, but those taps are at only two tables out of roughly 250 at the location.

Aaron Garisek, the pub’s director of operations, said its PourMyBeer taps are great for sports fans who don’t want to miss a play by ordering from a server or going to the bar. But he doesn’t foresee going completely self-serve because personal connections with bartenders and servers simply are too popular.

“I think it’s really important to have that smile,” he said.

Indeed, self-pour could prove to have limited appeal.

Nick Petrillo, a research analyst at IBISWorld, said the concept may seem cool, but in practice might complicate the experience for some customers. For example, drinkers may make bad pours, or spill more often than a trained bartender, leaving the tap areas sticky and unsanitary.

“This technology seems like a total buzz kill,” Petrillo said.

Chris Bright, president of Zpizza International, said that has not been his experience.

Bright said the chain is eating the cost of bad pours, but the systems are still moneymakers because Zpizza can serve a lengthy beer menu, while not hiring an army of servers. And customers, he said, are more likely to order another beer if they don’t have to stand in line again and pay at the register.

Customers like Chris Scales, who on a recent afternoon sipped a pale ale he poured at the location near airport, seem to bear that out.

“I don’t like interacting with bartenders,” he said. “They are always too busy.”

One table over, Shawn Herbst was enjoying a round with two colleagues. In town for a conference near LAX, the 44-year-old Floridian said he liked the self-pour concept, in part because it seems easier to try a bunch of new beers by tasting only a little.

But to test that theory he first needs to break his habit: a full pint of King Harbor California Saison rested on the table in front of him.