A New Source of Revenue 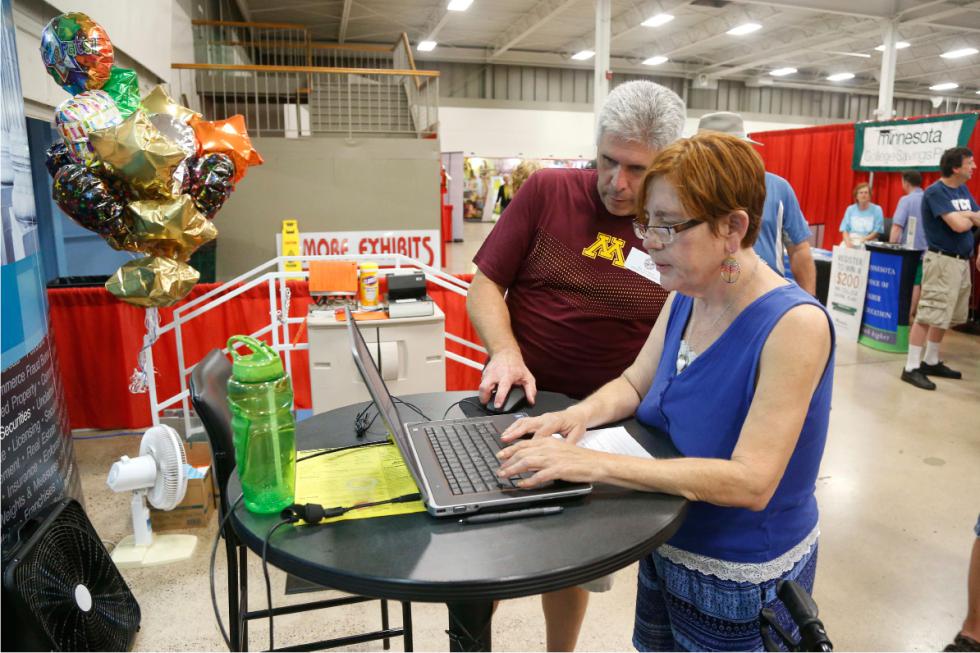 ADVANCE FOR USE SUNDAY, OCT. 18, 2015 AND THEREAFTER - In this June 2, 2015 photo, State Rep. Joe Atkins helps Gayle Wyant, right, check her name in the Minnesotas Department of Commerce unclaimed property list at a booth at the Minnesota State Fair in Falcon Heights, Minn. Atkins said he stumbled on the issue in the fall of 2014 when a friend mentioned the state had taken control of $700 belonging to his grandmother. Like other unclaimed property, it went directly to the state's general fund. Atkins decided to search the state's unclaimed assets list for people in his district. In three weeks, working 10 minutes a day, Atkins said he easily located people holding claims for $309,363. "These are people I see at the grocery store. They're not hard to find. They live down the street from me," Atkins said. (AP Photo/Jim Mone) 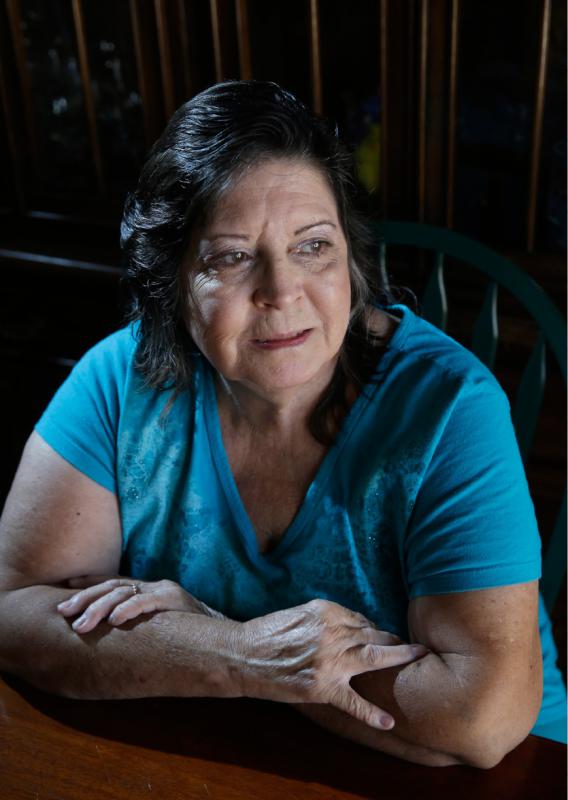 ADVANCE FOR USE SUNDAY, OCT. 18, 2015 AND THEREAFTER - In this Tuesday, Sept. 22, 2015 photo, Mary Ann Steele, who is a part of a lawsuit against the state of California over her experience in trying to reclaim an inheritance from her adoptive father, poses for a photo in Carmichael, Calif. In March 2015, the U.S. Court of Appeals in San Francisco ruled in the state's favor in a suit brought on behalf of Steele and other claimants. Their lawyer, William Palmer, has asked the U.S. Supreme Court to hear the case. "You're unknown when they have your property, but you're known when it's time to tax you," Palmer said. (AP Photo/Rich Pedroncelli)

When Americans lose track of money — in neglected bank accounts, paychecks they forgot to cash and elsewhere — state governments are increasingly aggressive in taking control of the cash.

Now, with those efforts swelling state coffers by more than $40 billion and lawmakers using some of it to patch budget holes, skirmishes are breaking out between states and companies with their own interest in holding on to the unclaimed property.

Companies accuse states of overreaching. State officials counter the businesses are more concerned with keeping the assets themselves. But critics say rightful owners too often get short shrift.

“The analogy is to finding somebody’s lost wallet. In Minnesota, anyway, we give people their wallets back. It’s just what we do here. But it’s not what the state is doing,” said Joe Atkins, a state representative from outside St. Paul who last year introduced a bill calling for increased funding to track down property owners.

While other states, too, have increased efforts to reunite owners with their property, many have changed laws to let them take control of more unclaimed property more quickly.

State lost-and-found programs have been growing rapidly for more than a decade. California alone has 28.5 million on its unclaimed property list.

States stepped up pursuit of unclaimed property in the late 1990s, after restructuring by insurance companies exposed those firms’ inability to locate many policy holders. Many states have hired auditing firms to scrutinize the books of insurers, retailers and others, paying them multimillion-dollar fees for unclaimed property they brought in.

Gilles Gosselin and Jean Louis Imbach, French chemists who developed a drug for treating hepatitis B, became shareholders of a company incorporated in Delaware to develop it. In 2009, without contacting them, Delaware took control of their stock, deemed abandoned, and sold it for $1.7 million.

As Gosselin and Imbach worked to track down their shares, the company was acquired by Merck & Co., in a 2014 deal that valued the researchers’ stock at $13.7 million. Delaware turned over proceeds of the earlier stock sale, but they took a $12 million hit.

“All of this could’ve been easily avoided if someone just sent a letter,” said Ethan Millar, a Los Angeles lawyer representing the researchers.

Most consumers on unclaimed property lists don’t even realize they’re entitled to missing money. It could be an inheritance they weren’t aware of or mutual funds entrusted to a broker with a mistaken address. Most are owed less than $100.

In all, state governments have $41.7 billion in unclaimed property on their books, according to the National Association of Unclaimed Property Administrators. Changes in law have accelerated collections:

∎  Last year, Pennsylvania lawmakers shortened from five years to three the period before bank accounts and other property can be considered abandoned. Money claimed by the state jumped to $669 million from $265 million the year before. Until the change, Pennsylvania returned about 43 percent of what it collected; afterward, payouts rose only slightly.

∎  Before 2008, Delaware waited until mail sent to owners of stock was returned as undeliverable before declaring their property abandoned. But that year, it began requiring only that shareholders have no contact with their account for three years, without attempting to reach them.

∎  Minnesota used to send letters directly to state residents telling them when the state had their money. But lawmakers eliminated that provision in 2005, while ditching the requirement to publish the names of property owners in newspapers.

Still, Minnesota is among states that set up booths at state fairs to inform people of the missing money, efforts that have helped boost its return rate to about 45 percent of what it takes in.

Michael Rothman, Minnesota’s commerce commissioner, said he wants legislators to double or triple funding to hire finders who will search for people and to step up advertising and outreach.

“It’s great to have a goal, but if you don’t give the resources to do it, we can’t achieve it,” Rothman said.

For those unaware the state has claimed their property, “it’s a stealth tax,” said Ferdinand Hogroian of the Council on State Taxation, which represents big companies in pushing for uniformity in unclaimed property laws.

But state officials argue that businesses frequently do not act in the best interest of consumers.

Until recent settlements between states and large insurers, the companies did not check for deaths that would necessitate payments on old life insurance policies, and some still do not do so.

“There is the potential for companies to do as little as possible to get the money back to the owners,” Vermont State Treasurer Beth Pearce said. “We would like to see more due diligence by the holders, so it gets to the individuals before it even becomes unclaimed property.”

Consumers’ right to claim missing money never expires, even as legislators spend a portion of the funds. On average, states’ net of unclaimed property amounts to just a small part of their budgets — about half a percent as of 2011, according to NAUPA.

But states vary. Delaware has turned unclaimed property into its third largest source of revenue. Last year, it brought in $514 million, accounting for more than 13 percent of the budget. That pursuit of that revenue — often via audits delving back decades — has angered many companies.

Some complaints have focused on Kelmar Associates, a Massachusetts-based auditing firm which at times handled more than three-fourths of Delaware’s business, earning more than $100 million in contingency fees and other payments since 2013.

Delaware legislators last year embraced a law giving companies the right to enter into a voluntary agreement before an audit and shortening the period that audits can cover. And they limited any single auditor to no more than half the state’s business.

In 2011, Delaware paid out less than 5 percent of the $427 million it received that year, a time when states were returning an average 34 percent. The deputy finance secretary, David Gregor, said the return rate has risen to about 20 percent.

Gregor said the state has been evenhanded — “preserving our ability to enforce things when companies really have a responsibility, but also being business friendly.”

Several companies have taken Delaware to court over audits.

One lawsuit was filed recently by Houston-based Plains All American Pipeline even before a Kelmar audit was fully under way. It complained of “confiscation.”

Gregor and Kelmar’s president, Mark McQuillen, defended the state’s arrangements with the company and the auditing procedures.

California, meanwhile, continues to battle a lawsuit filed in 2001, accusing the state of doing too little to find and notify owners. In 2007, a federal court temporarily shut down the state’s property claims process, forcing legislators to pass a law to fix it.

Since the process restarted, property claimed by California has swelled from $4.1 billion to $7.6 billion.

In March, the U.S. Court of Appeals in San Francisco ruled in the state’s favor. The lawyer for claimants, William Palmer, has asked the U.S. Supreme Court to hear the case.

“You’re unknown when they have your property, but you’re known when it’s time to tax you,” Palmer said.

Taryn Kinney, a spokeswoman for the state controller’s office, said it doesn’t have the budget to step up search efforts for property owners.

Other states are trying to find more claimants.

Among the recent beneficiaries was Fred Meyer, a retired engineer from Louisville who lost track of Apple Inc. stock years ago when it was valued at only $2 per share. The stock eventually was reported as unclaimed property and sold by the state in 2012.

A few weeks ago Hollenbach called Meyer and said he’d be getting a check for $461,000.