The Business of Agriculture: Cold-hardy kiwi has high-value potential 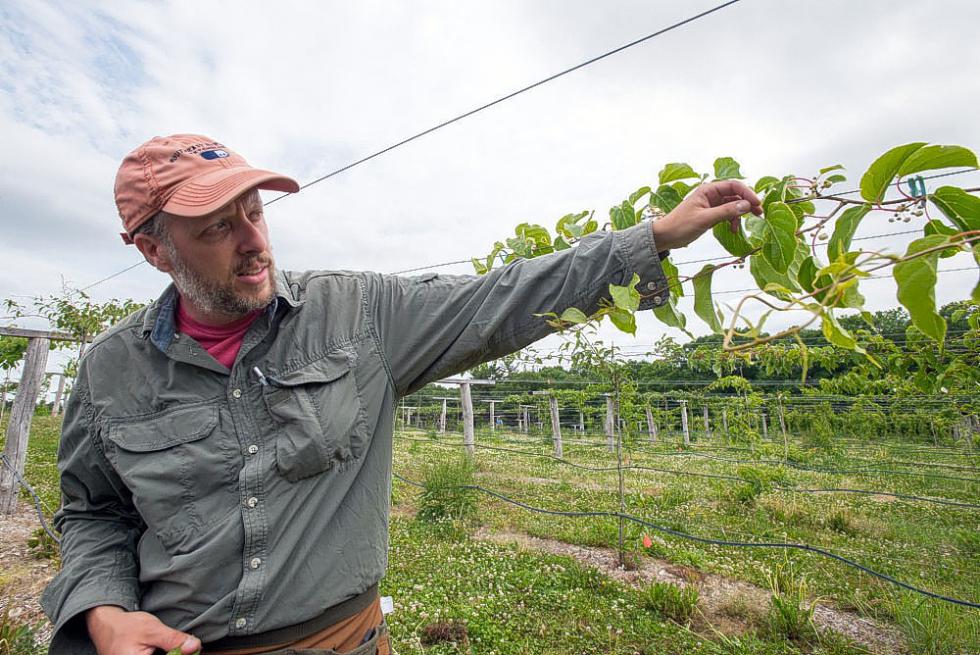 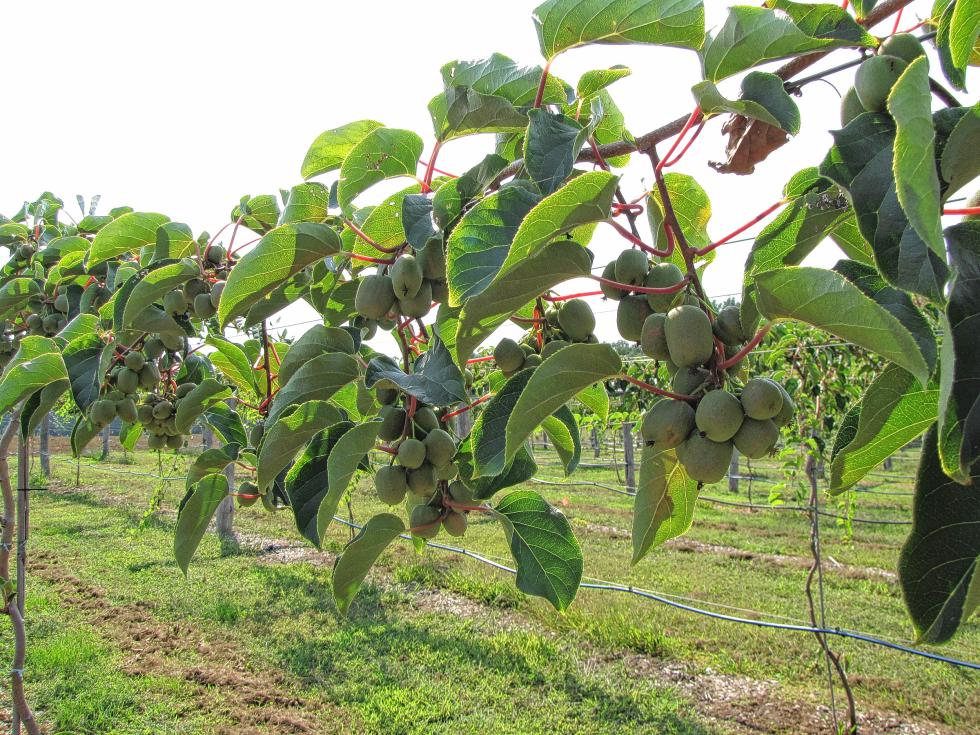 The first time Iago Hale popped a cold-hardy kiwifruit in his mouth in graduate school, he was left speechless, amazed that he had never encountered the delicious, grape-like fruit before.

Now, the researcher with the New Hampshire Agricultural Experiment Station at the University of New Hampshire is a hardy kiwifruit breeder working to develop the small, sweet fruit into a new high-value crop for New England farmers.

“Hardy kiwis are well-suited to the relatively small and diverse farms that dot the New England landscape,” said Hale, a plant breeder and assistant professor of specialty crop improvement at UNH’s College of Life Sciences and Agriculture.

Cultivated by hobbyists and backyard gardeners in the Northeast for nearly 150 years, these species show great commercial potential in the region, Hale said. Until now, however, they have lacked a public breeding program to develop high-performing varieties and demonstrate their economic viability to producers.

“We’re going to change all that,” he said.

A single mature hardy kiwi plant can yield up to 100 pounds of fruit. By establishing a long-term breeding program on experiment station land, the New Hampshire Agricultural Experiment Station aims to support the region’s producers and consumers through the development and dissemination of the novel crop, Hale said.

Native to China, Japan, Korea and Siberia, hardy kiwis differ from their larger, fuzzier relatives in that they are hairless and have thin, edible skin.

Some varieties of the perennial vining plants can be grown as far north as U.S. Department of Agriculture’s Growing Zone 3. (The Upper Valley is in Zone 4 or 5.)

Hardy kiwis first were appreciated for their ornamental value, covering cottages and trellises in estate gardens throughout the Northeast.

By the mid-1900s, the excellent eating quality of the berry-like fruit was starting to be appreciated as well.

In the 1960s, after serving in the Army, UNH botanist Edwin Meader brought hardy kiwis he collected in Korea to his farm in Rochester, N.H. One of his selections (Meader male) remains one of the most prevalent and preferred hardy kiwi cultivars offered by nurseries today.

At UNH, Hale is growing nearly the entire USDA collection of hardy kiwis, about 150 genetically unique plant sampl es, in order to characterize the collection and identify parent plants for his breeding program. This first observational vineyard was planted in 2012, and Hale expects a first harvest this fall.

Hardy kiwis are a superfood, nutritionally dense with extremely high levels of vitamin C, beta-carotene, anthocyanins and lutein. They are remarkably sweet and flavorful fruits that are about 25 percent sugar. And given their complex flavor profile, with hints of tropical fruits with a nice acidity, Hale said, some producers even use them for winemaking.

Hermit Woods Winery, of Meredith, N.H., makes two wines using hardy kiwis and has plans for a third. According to co-owner Bob Manley, both kiwi wines sell out every year, and hardy kiwis have become an important part of the company’s wine production.

“They are unique in that they are the rare fruit that can produce sugar levels equal to or higher than grapes, especially grapes grown in this region,” Manley said.

The company currently gets its hardy kiwis from Pennsylvania. “Ideally we would like to be able to procure our fruit from local farmers. The shipping costs alone to get the fruit from Pennsylvania drive our price up. If we could identify farmers in the area that could produce good quality organic fruit, we would be willing to pay top dollar for it,” Manley said.

Hale is hopeful his research will lead to the establishment of a hardy kiwi industry in New Hampshire, whether for fresh eating, winemaking or other value-added products. To that end, he is already working with two farmers in Coos County who are interested in diversifying their crops with hardy kiwis.

In North Stratford, N.H., Kitty Kerner and her family operate WinterGreens Farm and Aquaponics, a small farm that has to contend with a short growing season and hard winters. The family has been working to expand its selection of high-value crops, and according to Kerner, “hardy kiwis seemed just right for our challenging climate, given their native habitat is Siberia.”

Kerner said her family is excited to be part of Hale’s kiwi selection trials and believe this crop has great potential as a new opportunity for farmers in Northern New England. “As with any new product, it will take some effort to introduce the hardy kiwis to consumers and convince them how great they are, but we believe that won’t be too hard once you can get samples to the markets and other potential customers,” Kerner said.

“Should the kiwis be successfully established on our farm, we are definitely hoping to expand the vineyard and also looking into their potential use for value-added products such as for winemaking, jams and perhaps dried fruit,” she said.

Pierre Miron of New Earth Organic Farm in Colebrook, N.H., said he believes hardy kiwis will help him diversify his crops. The fruit’s potential demand and ability to survive northern New Hampshire’s cold climate and store for up to two months appeal to him. “For me, hardy kiwis could become a high-value new crop, a good complement to what I offer to my customers,” Miron said.

“I have been farming for eight years in Colebrook and I know, to be realistic, I need to do my own experiment at my farm and see how it is doing here. … I am already preparing another section in the garden to expand. I am very optimistic.”